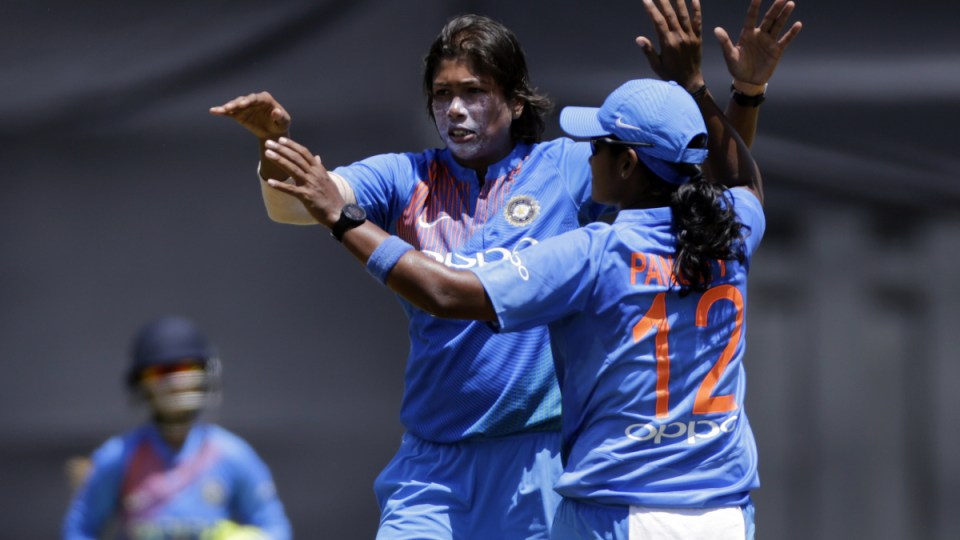 Australia’s record 26-match ODI winning streak is over after suffering a dramatic two-wicket loss in Mackay, where India held its nerve in another final-over thriller.

Veteran Jhulan Goswami, who conceded 13 runs in Friday night’s last over to snatch defeat from the jaws of victory at the same venue, proved the tourists’ hero with the bat on Sunday.

India needed four runs from the final over, delivered by left-arm spinner Sophie Molineux, to haul in a target of 265 and complete its highest chase ever.

Molineux, bowling with a heavily bandaged face because of an earlier rearing return that drew blood, delivered a dot ball before Meghna Singh’s swept single put Goswami on strike.

Came agonisingly close in the 2nd ODI but have crossed the finish line NOW. #TeamIndia win the 3rd ODI by 2 wickets after a thrilling chase and with it end Australia’s marathon 26-match unbeaten streak. #AUSvIND pic.twitter.com/4b7QJxvX5w

The 38-year-old whacked the next delivery back over Molineux’s head for four to lift India to a victorious 8-266, having earlier dismissed Meg Lanning and Rachael Haynes in a double-wicket maiden to help restrict Australia to 9-264.

Australia rallied from 4-53 to finish 5-275 in Friday’s ODI, completing its second-highest chase.

There was no great escape on Sunday despite India, in the box seat after cruising to 1-160 in 29.2 overs, threatening to fold after a collapse of 5-48.

Another thriller, which this time goes the way of @BCCIWomen 🤝 Gutsy stuff from our girls!

But Sneh Rana (30) and Deepti Sharma (31) regained control after Sutherland made a mess of captain Mithali Raj’s stumps.

Rana rode her luck in a quick-fire knock, having been dropped on 10 and 11 during the 45th over.

Nicola Carey, who put down the second of those two chances, dismissed Rana in the 46th over but the batter was recalled after a video replay showed the bowler overstepped.

The multi-format series continues on Thursday, when a day-night Test starts on the Gold Coast.

Ellyse Perry finished with figures of 0-34 from five overs as her new-ball struggles continued, while hamstrung star batters Haynes and Beth Mooney both left the field during Sunday’s chase and didn’t return.

Australia won the toss but slipped to 4-87 on Sunday before a momentum-shifting stand of 98 runs between Ashleigh Gardner (67) and Beth Mooney (52).

Mooney was dropped on 29 and 38, while Gardner benefited from a chance on 61 en route to the highest score of her ODI career.