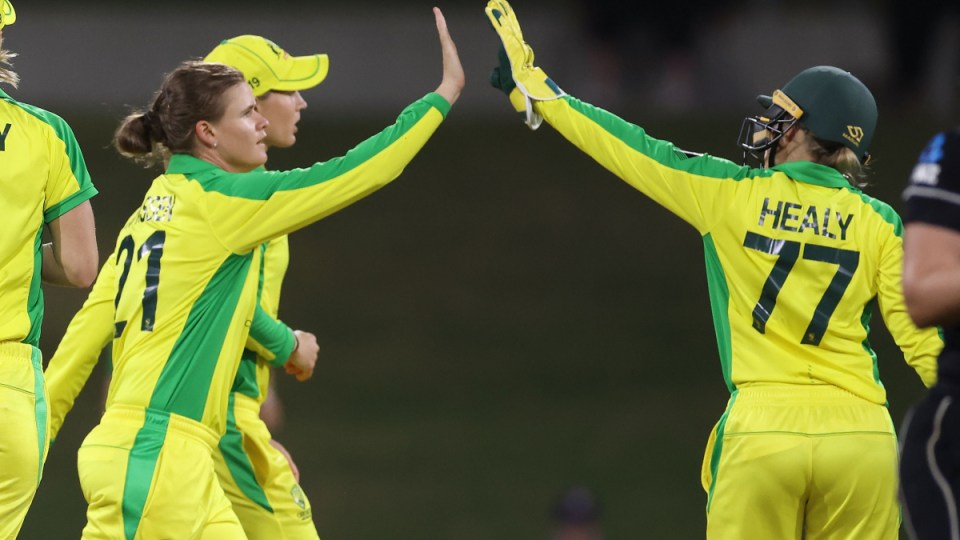 Australia has taken an unassailable lead and retained the Rose Bowl in the three-match series against New Zealand following a comfortable 71-run triumph in the second ODI in Mount Maunganui.

The tourists batted first on Wednesday and made 7-271 from their 50 overs, with opener Rachael Haynes playing a leading role with a superb innings of 87.

New Zealand was making solid progress in its run chase when it was 4-144 in the 32nd over, however the hosts lost their final six wickets for the addition of just 56 runs.

Jess Jonassen was the most productive of the Australian bowlers with the figures of 3-29.

The two teams meet again in Mount Maunganui on Saturday.

A 71-run win in the second ODI means the Rose Bowl stays in Australia! 💪 Jess Jonassen the pick of the bowlers with 3-29.

Australia had won the opening match of the series by six wickets on Sunday and in doing so extended its record winning streak to 22 matches.

Sunday’s victory saw Meg Lanning’s team overtake Ricky Ponting’s 2003 men’s side for the longest run of victories in any form of international cricket.

The 23rd consecutive win on Wednesday was built on a solid — yet unspectacular – batting performance, spearheaded by Haynes.

Her 105-delivery knock produced eight fours and she shared in two significant partnerships, with Alyssa Healy and Lanning.

A strong display with bat and ball and we've won the series with a game to play! #NZvAUS pic.twitter.com/yNeKCti49q

Haynes and Healy put on 82 runs for the opening stand, before White Ferns spinner Leigh Kasperek made the first breakthrough.

She removed Healy for 44 when she had the Australian wicketkeeper caught by White Ferns captain Amy Satterthwaite.

Lanning joined Haynes at the crease and the pair contributed 98 runs for the second wicket until Satterthwaite struck with the dismissal of the Australian skipper for 49, caught by Lauren Down.

Lanning passed 7000 runs across all international formats during her stay at the crease, becoming only the fifth woman to achieve the feat.

Haynes was the next to fall, caught by Down off Kasperek, who eventually finished with the outstanding figures of 6-46.

Georgia Wareham (11) and Jonassen (1) were the not out batters when Australia’s innings drew to a close.

Very important knock from Rachael Haynes at the top of the order today! #NZvAUS pic.twitter.com/rF0lwqUsFh

The White Ferns were on the back foot early when Down was out for a duck – caught Lanning off Tayla Vlaeminck – in the opening over of the run chase.

Satterthwaite departed in the second over for 6, caught Healy from the bowling of Megan Schutt, and the White Ferns were struggling at 2-7.

Opener Hayley Jensen and Amelia Kerr steadied the ship, however, compiling a partnership of 69 runs for the third wicket.

Their stand was halted when Jensen was out for 28, caught Vlaeminck off Wareham.

Kerr became Jonassen’s first victim when she was caught by Ashleigh Gardner for 47, which turned out to be the top score in the White Ferns’ innings.

The home side encountered trouble following the run out of Brooke Halliday for 32, the wicket leaving them at 5-144.

The Australians picked off the remaining White Ferns’ batters with relative ease, with Wareham joining Jonassen as a multiple wicket taker after finishing with 2-39.