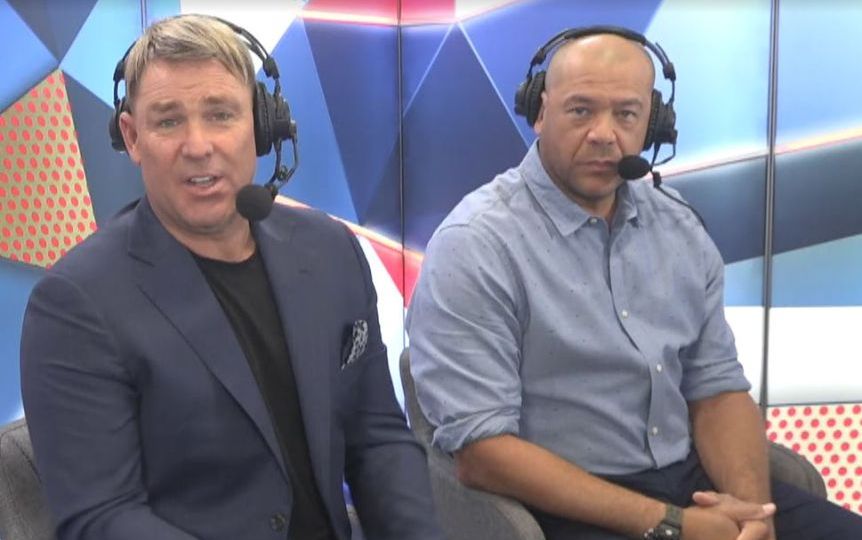 Andrew Symonds and Shane Warne -- good mates and both dead before their time.

The hot mic gaffe was caught at the start of the Adelaide Strikers and Melbourne Renegades Big Bash match on Friday evening and was shared on social media.

The Australian greats did not appear to be aware they were being broadcast when Warne suggested that part-time spinner Labuschagne be given a chance to bowl late on the second day of the third Test against India.

Symonds then turned the discussion to reference Labuschagne’s quirks at the batting crease.

“That or his ADD [attention deficit disorder] f***ing pills,” Symonds said of Labuschagne.

Symonds replied: “We’ll have to give him the hog pile”.

“Mate, if you keep that shit up, we’re going to squash your guts out your arse,” he added, prompting laughter from Warne.

The Foxtel-owned streaming service apologised for airing the “unacceptable comments.”.

“On behalf of and the commentary team, we unreservedly apologise,” it said on Twitter.

Warne’s frank memories of his first Test tour of India, in 1998, when he played alongside the likes of Paul Wilson, Adam Dale and Gavin Robertson were also broadcast.

‘What a hit’: Albanese on attack after dire wages data
Inquiry into mother’s convictions over deaths of four children
Viagogo loses appeal over $7 million penalty
Sydney home sprayed with bullets in gang violence
‘Admit what the hell is going on’: Biden wants US to face White Supremacy problem
Device detonated, man arrested in Brisbane sieges
Smith drought-breaker has Test in balance
Today's Stories