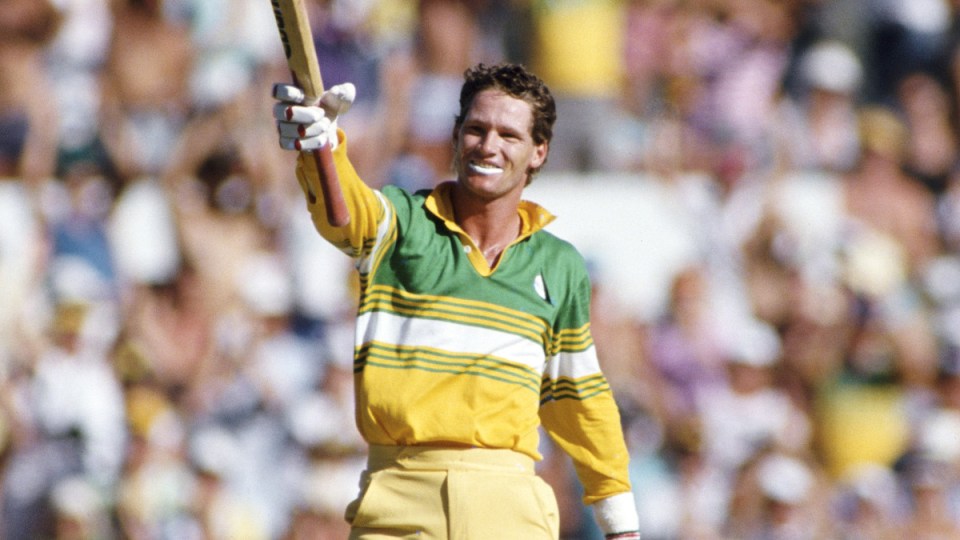 As the cricketing world struggles to come to terms with the sudden passing of Australian batting legend Dean Jones, an outpouring of heartfelt tributes has illustrated the esteem in which the Hall of Famer was held.

Jones, 59, died of a heart attack in Mumbai, where he was providing coverage of the Indian Premier League for Indian network Star Sports.

After Jones collapsed in their Mumbai hotel, co-presenter Brett Lee reportedly tried to revive his colleague before he was taken to hospital.

Lee and former New Zealand all-rounder Scott Styris worked with Jones on the Select Dugout pre-game show and both fronted the cameras just hours after his death.

“In many ways the Dugout was Deano,” Styris said.

“Who would have thought this morning, when we got up, had breakfast with Deano, I watched him jog up and down the hallway, that was his way of keeping fit.

“Who would have thought merely a couple of hours later he had this heart attack.

“Incredibly sad … we’ve had a lot of friendly banter …” Styris said before breaking off, grimacing and looking at the ceiling, unable to continue.

West Indian great Sir Curtly Ambrose recalled the day Jones asked him to remove his wristbands and said the Aussie great was a “thorn in our flesh”.

In an infamous move during a World Series Cup match 1993, Jones demanded Ambrose remove his white wristbands, complaining it was making it hard to see the white ball.

Jones had discussed the move with then coach Bob Simpson, hoping it could disrupt the giant West Indian bowler.

It only served to fire the West Indian great up, who went on to further terrorise the Australian batting order for the rest of the tour.

But Ambrose has been quick to heap praise on the Victorian.

“He was a wonderful player. When he was walking to the crease you could see that confidence in his stride,” Ambrose said.

“You can’t tell if he’s scared, nervous, or anything. He always believed in his ability, and no matter what you throw at him he’d get the better of you.

“He was a bit of a thorn in our flesh.

“It was a very sad morning when I received the news today.”

Ambrose was among a host of West Indian greats, including Sir Viv Richards, Brian Lara and Courtney Walsh who lined up to pay homage to Jones.

Australia’s greatest Test run-scorer, Ricky Ponting, was “heartbroken” by the news, writing of the joyful times he had talking sport with Jones.

Pakistan fast bowling great Wasim Akram said he was “absolutely gutted” to learn of the news of Jones’ passing, while his partner on the cricket pitch Waqar Younis wrote of losing a “best friend”.

Those sentiments were echoed by India’s greatest-ever batsman, Sachin Tendulkar, who mourned a “wonderful soul taken away too soon”.

Daughter Isabella, who appears to call herself Augusta on Instagram, paid tribute online on Friday.

“I cannot believe I am writing this,” she wrote.

“My heart is broken.

“My Dad. My Hero. The sweetest and most caring person you could ever meet.

“You held my hand through the toughest times this year, how will I do this without you?

Phoebe posted a photo of her in the crowd as a young girl as her star batsman dad walked back to the pavilion.

Phoebe was saying goodbye to Jones as he departed for his commentary duties in the IPL.

“This is me waiting for @profdeano to come home and he’s only just left!!

“Happy Father’s Day to the most dedicated and generous man I know,” Phoebe wrote.