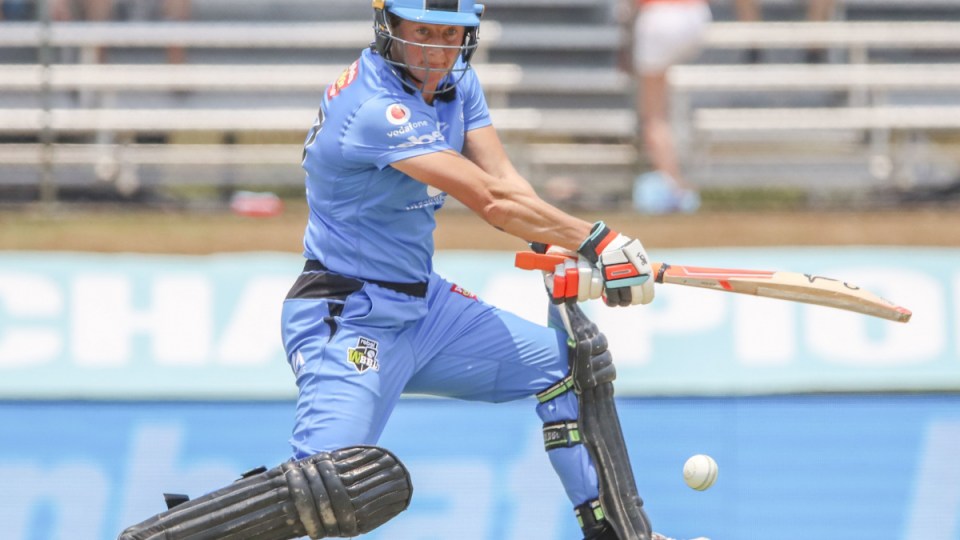 Sophie Devine on her way to another half-century. Photo: AAP

Another half-century to in-form Adelaide allrounder Sophie Devine has guided the Strikers to Sunday’s WBBL final against Brisbane Heat.

The New Zealander belted her ninth 50 of a remarkable tournament before finishing unbeaten on 65 as Adelaide beat Perth Scorchers by eight wickets in Saturday’s first semi-final at Allan Border Field.

The Strikers will face the Heat in the final after sensational display of power-hitting by Grace Harris led the defending champions to a four-wicket win over Melbourne Renegades in the second semi.

Set a challenging target of 164 by the Renegades, Devine’s fellow New Zealander Maddy Green belted 46 off just 29 balls to give the Heat the perfect start.

Despite losing Green and Beth Mooney (15) in consecutive deliveries off Molly Strano (4-28), Harris smashed 43 off 27 balls including four sixes to ensure the Heat eased to Sunday’s decider.

Harris and fellow Australian international Jess Jonassen (38 off 23) were ruthless on the Renegades attack, their 80-run third-wicket partnership coming off just 44 deliveries and included five fours and six sixes.

Strano’s late scalps of Jonassen and Laura Harris (0) made her the pick of the Renegades’ bowlers as the Heat finished on 6-166 with 12 balls remaining.

Devine’s innings means she now has 764 runs this season with the 30-year-old just 13 shy of Ellyse Perry’s record haul of 777 from last year’s tournament.

The White Fern made a perfect start to Saturday’s semi-final, snaring Scorchers captain Meg Lanning for just one in the second over of the match.

The early scalp of Suzie Bates (1) gave the Scorchers hope their score would be enough but Devine and Tahlia McGrath (36) put on 79 runs for the second wicket to put the Strikers firmly in control.

Perth were guilty of missed opportunities with McGrath dropped twice in her knock and Devine surviving an early caught behind appeal before being dropped by Nicole Bolton late in the match.

It’s really great to have her leading from the front both in the batting and bowling departments. Hopefully she continues her form tomorrow.”

Defeat for the Scorchers means despite making the finals four times in five years in the WBBL, they are yet to claim a title.

“We bowled reasonably well, created chances, couldn’t take them unfortunately and any time we were able to build a little bit of pressure we sort of let them off with a bad ball,” Lanning said.

“Sophie Devine, again, was too hard to stop and the Strikers just outplayed us today.”

WBBL: Devine batting as Strikers set to take on Heat in final