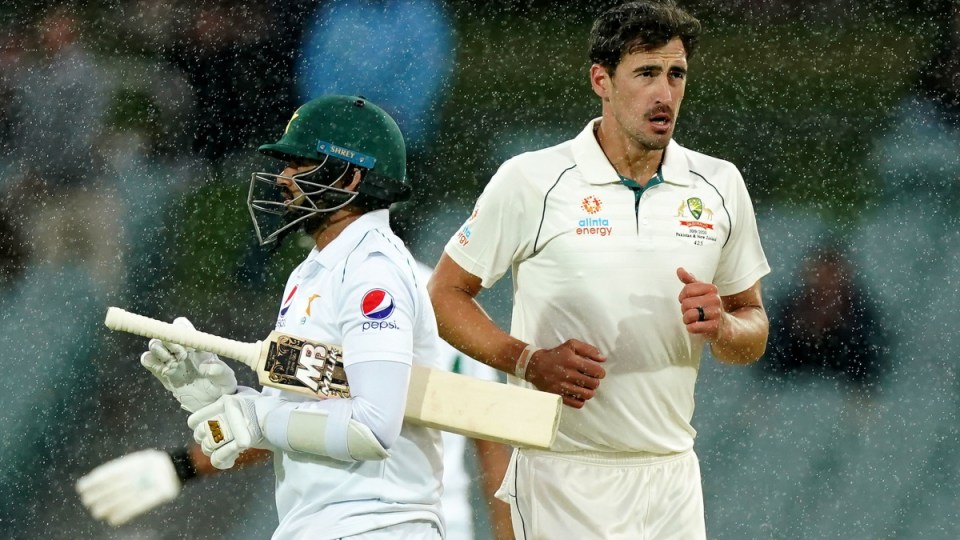 Rain falls and so does Pakistan: Azhar Ali leaves the field after being dismissed by Mitchell Starc. Photo: AAP

Australia goes into day four of the second Test at the Adelaide Oval looking for blue skies and seven wickets.

Rain stopped the home team’s charge towards a big win on Sunday night with stumps called with Pakistan at 3-39 in their second innings after being forced to follow on.

Paceman Mitchell Starc was the destroyer in the tourist’s first innings, his six wickets gifting Australia a 287-run lead.

The rain was clearly in Australian skipper Tim Paine’s mind when he decided to make Pakistan bat again, and it was a gamble that paid off.

It was the first time Australia had forced the follow on since 2015 against the West Indies in Hobart.

Paine was not having as much luck with his DRS reviews, with more embarrassing misses.

Josh Hazlewood claimed two scalps – drawing the edges of Imam-ul-Haq for a duck and the dangerous Babar Azam for nine.

Starc also added another wicket to his first innings haul, having Azhar Ali caught for nine.

Earlier on Sunday it looked as if Pakistan may force Australia to bat again, with spinner Yasir Shah becoming Pakistan’s oldest player to score a maiden Test century.

Australia missed six chances to remove him in the field, as Pakistan added 206 to their overnight total of 6-96 and Babar went within a whisker of back-to-back centuries.

Two Yasir edges bounced marginally in front of Steve Smith at first slip off the spinners, while Marnus Labuschagne also grassed two chances to remove him.

Matthew Wade should have had him run out, while Paine missed a stumping chance off Nathan Lyon that bounced and turned between bat and pad.

The 33-year-old eventually finished on 113, the last man out when Pat Cummins had him caught swatting away at one on the legside boundary.

Cummins meanwhile finished with 3-83 to become the first bowler to reach 50 wickets this year.

But Starc was by far and away Australia’s best after David Warner’s 325 in their first innings helped them to 3(dec)-589.

The left-armer had four wickets with edges on Saturday night, he claimed his 12th career five-wicket haul on Sunday and his second in six Tests with the pink ball.

One of Starc’s victims was the key scalp of Babar caught behind, after he again gave Pakistan their only real light with 97 to go with his century at the Gabba.

While his teammates struggled with the pink ball and the Adelaide wicket, Babar was his usual elegant self, playing nicely both sides of the wicket.

But his quest to become just the 13th tourist to hit successive tons in Australia fell agonisingly short when he edged Starc behind to a diving Paine.

Teenager Shaheen Shah Afridi went the following ball; trapped lbw to Starc as he used up a review in the process.

But Starc narrowly missed out on a hat-trick the next ball when Mohammad Abbas (29) had a leading edge fall safe.