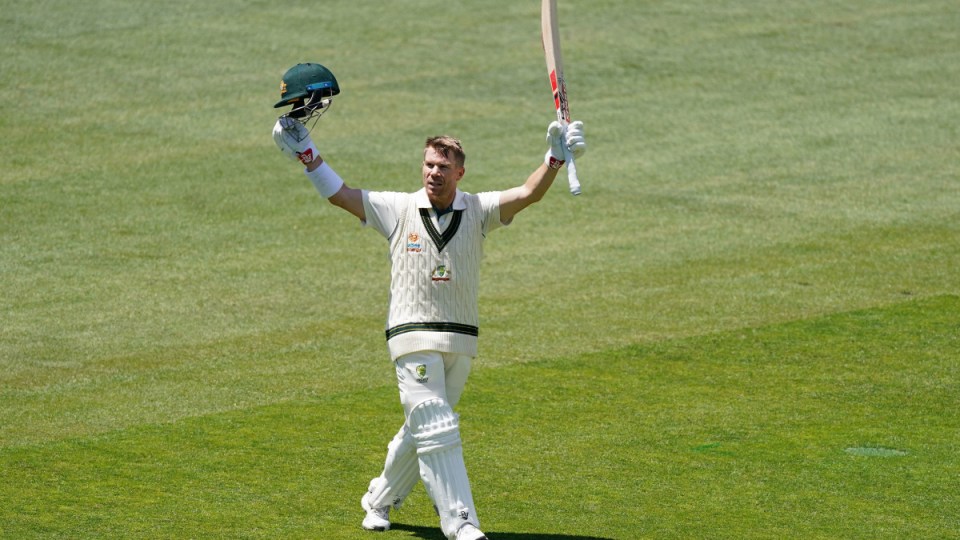 David Warner celebrates with his trademark leap and kiss of the helmet after scoring his second Test double century. Photo: AAP

Australia’s bowlers are smashing through the Pakistan top-order on a day when long-standing records by Don Bradman fell at the Adelaide Oval second Test.

David Warner smashed 335 to bat Pakistan out of the match on day two, with Australia declaring at 3-589, looking to win the two Test series without having to bat again.

In reply Pakistan lost the early wicket of Imam-ul-Huq for two, with Warner in the action again, taking the catch off the bowling of Mitchell Starc.

Then it was Azhar Ali’s turn to head for the changing room after edging a Cummins fireball to Smith.

At 2-22 and facing an impossible chase, Pakistan were in a world of pain that wasn’t going to lift as Hazlewood tempted Shaan, who was caught by Paine.

The collapse continued when Starc went on a three wicket rampage.

First he had Asad Shafiq caught behind for nine, followed by Iftikhar Ahmad who fell to a brilliant catch from Australian skipper Tim Paine for 10 and Rizwan out for a duck similarly soon after.

The former vice captain, who was suspended for 12 months after the Capetown ball tampering scandal, also set the second highest Test score by an Australian set by Bradman and Mark Taylor.

The record is held by Matthew Hayden with 380 against Zimbabwe in 2003.

It was Warner’s first innings past 300 and comes after the opener endured a shocking Ashes campaign in England where he made only 95 runs for the entire series.

Steve Smith also claimed his own piece of history, despite falling relatively cheaply for 36 when caught behind off Shaheen Shah Afridi – who has taken all three wickets.

It has taken Smith 126 innings to reach the mark, getting there five faster than Englishman Walter Hammond who has held the record since 1946.

Smith’s innings also took him past Don Bradman’s career-mark of 6996 runs, lifting him to the 11th most prolific scorer in Australian Test history.

Warner’s huge innings always looked on the cards when he went to tea on 261 after getting some luck when he was caught off a no ball.

Warner told Channel Seven as he headed to tea that he hoped to keep the runs coming in the afternoon.

“It’s just about being disciplined, the last two days I have been very disciplined and am happy about that, so I’m hoping we can put the foot down soon,” Warner said.

It’s not everyday that you can go out and get 200, but it’s a great milestone and has put the team and a great position.”

The pair brought up their 300-run partnership just after 2pm on Saturday.

Labuschagne went on to make 162, before clipping the top of his off-stump off Shaneen (2-48).

He brought up the milestone when he turned Shaheen around the corner for a single off his 260th ball, with his top score of 253 against New Zealand in 2015 now his next big mark in sight.

It comes after the 154 the left-hander chalked up at the Gabba last week against Pakistan, atoning for a poor Ashes series in England.

Warner’s record for the international summer is now a ridiculous 641 runs at an average of 320.5, after also dominating the early-season Twenty20s.

On day one, Australia amassed 1-302 with Warner unbeaten on 166 not out and 126 not out, making the pair’s unbroken 294 run partnership a second-wicket record for Australia against Pakistan.

“He just looks like he’s a long way off the mark, Azhar Ali.

“He’s only captained 16 first-class games in his life, so he’s a young captain in charge of a young bowling team and they look like they just need a bit more experience at the helm.

“It’s obviously not the most skilled bowling attack of all time. But that’s where you need the captain to be able to help out and set certain fields for you, and tell you exactly what he wants you to do as a bowler. It doesn’t look like they’ve had that direction out on the field,” he told cricket.com.au