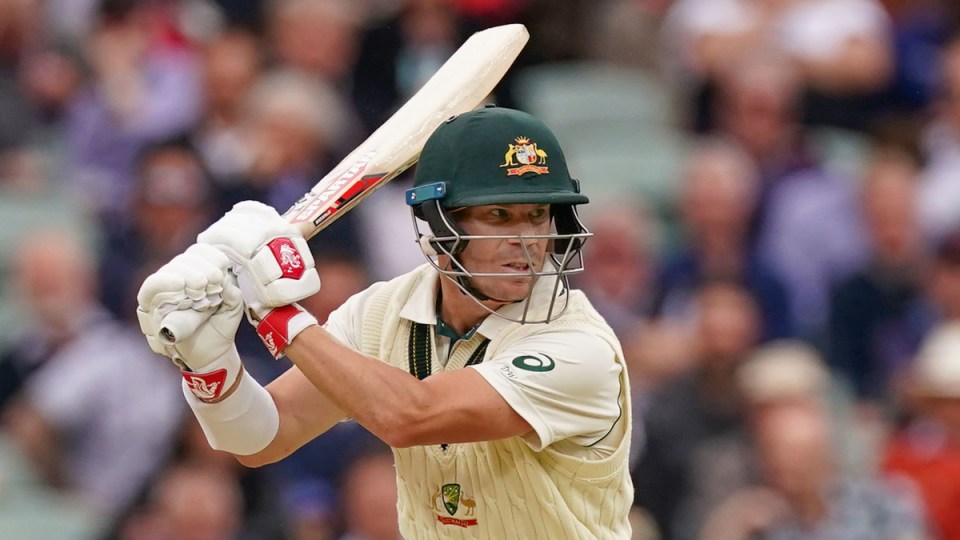 David Warner hits out at the Adelaide Oval. Photo: AAP

Australia’s batsman have again punished Pakistan, with David Warner and Marnus Labuschagne both smashing centuries on the first day of the second Test against Pakistan at the Adelaide Oval.

Despite enduring a long rain delay, the pair looked in complete control as they shared a 250-run partnership to push Australia past 300 and set up another big total.

Both batsmen scored centuries in the first Test at the Gabba, putting Australia one-up in the two-match series.

Pakistan broke through early in the first session after Australia won the toss and elected to bat on the opening day of the day-night Test.

Warner’s opening partner Joe Burns fell early in the first session for four, caught behind by Mohammad Rizwan off the bowling of Shaheen Shah Afridi. Australia was 1-8.

Warner was then joined by Labuschagne, with the latter taking his time to settle, before the pair steadied the innings on a pitch that offered little for the bowlers.

Having taken Australia to 1-139 after the middle session Warner said it had been a tricky time to bat after the break.

“Always thought they might swing a little maybe under the lights, having the little [rain] period off,” he told Channel Seven.

“We just tried to come out and see off those bowlers again, see there was a little bit of movement and wait for them to sort of overpitch or pitch it short.

“[We were] very disciplined there. We’re very happy, but the second half here is where the key is …

It is about knowing your game, the plans and how they want to get you out. I have been disciplined so far, hopefully I can continue into tomorrow.”

Rain brought on an early tea break, with the covers brought out after 22 overs and intermittent drizzle bringing the covers out for almost two hours.

Rain had earlier delayed the start of play by ten minutes and wet weather is also forecast for the rest of the weekend.

Unchanged from last week’s convincing win at the Gabba, the Aussies are aiming to clean sweep Pakistan in the two-Test series.

The tourists made three changes following their first Test drubbing.

Seamer Mohammad Abbas was recalled after running through Australia in the UAE last year, while teenage quick Muhammad Musa will debut.

Haris Sohail was also omitted, allowing captain Azhar Ali to move to No.3 and Imam-ul-Huq to come into the team as an opener.

Azhar said at the toss he would have bowled first anyway, but Paine insisted it was best to bat in the day on what appears a drier-than-usual Adelaide wicket.

“The wicket looks really good, pink ball, we like to bat first,” he said.

“There might be a bit of rain around so will be interesting to see how the pink ball handles it.”

Australia have never lost a pink-ball Test, with Friday the sixth in their history and the fourth to be played at the Adelaide Oval.

Pakistan meanwhile have played three, having only lost narrowly to Australia in their only day-night clash in the country in 2016 at the Gabba.

The tourists are still searching for their first Test win on Australian soil since 1995, having lost 13 in a row.

Pakistan had earlier lamented that they have two cracks at the home side in this series.

This summer’s two-Test series is the first time the two teams haven’t met over at least three matches in Australia since 1978-79.

With harder pitches and extra bounce in Australia, Pakistan’s batters have little time to adjust from the slow and low wickets of the sub-continent, while bowlers are far too often enticed to bowl too short.

Pakistan captain Azhar Ali said touring sides had to learn how long it takes to build pressure on Australian wickets and he wants a longer series having gone 10 months without a red-ball fixture against any nation.

“Obviously we always love to play more Tests,” Azhar said. “As the Pakistan team, we don’t play too many Tests. That’s not good for any team.

“If we play more Tests, we’ll have a better chance to even adjust to different conditions.

“The last time we played three Tests here, and if you see our batsmen scored hundreds in all Tests.

This is one country where you can score big runs. And if you get, here early and get more Tests it will be better.”

Pakistan’s problems exist well beyond Australia. They have played more than two Tests just twice in the last seven series.