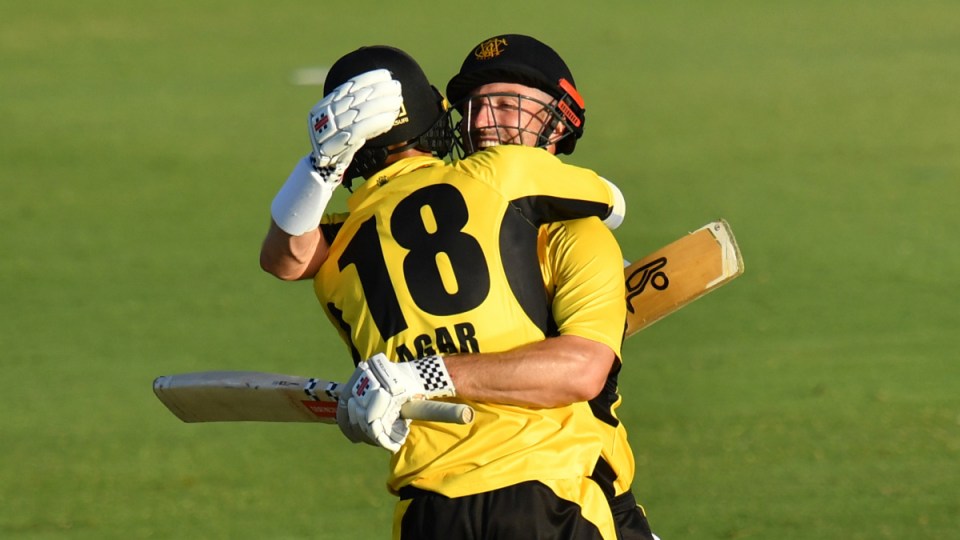 A defiant century by Shaun Marsh has steered Western Australia to a tense four-wicket victory over Queensland in the domestic one-day final in Brisbane on Tuesday.

Ex-Test batsman Marsh stood tall as wickets fell around him with a chanceless 101 not out, guiding WA to 6-210 in the 48th over and earning its 14th domestic one-day crown.

Man of the match Marsh rated his ninth one-day ton for WA as one of the best of his 19-year career.

“It’s obviously right up there. To be there at the end and get us over the line was an amazing feeling,” the 36 year-old said of his three-hour, 132-ball knock that featured 13 fours.

Set what looked like a paltry victory target of 206, WA made a disastrous start when it slumped to 3-23 in the seventh over, with Bulls quick Michael Neser (2-34) looking dangerous.

But Marsh launched a rescue mission with a 97-run, fourth-wicket stand with Marcus Stoinis (37) before icing the result in an unbeaten 59-run partnership with Ashton Agar (29 not out).

Agar brought up the winning runs at Allan Border Field by thrashing Matthew Kuhnemann for six.

“We kept losing wickets at crucial stages, but I thought Ashton Agar was really good at the end there,” Marsh said.

Queensland captain Usman Khawaja failed to make a statement after being overlooked for the Test series against Pakistan, dismissed for 26 off 28 balls before the hosts were bowled out for 205 in 49.3 overs.

But he was provided some consolation when he was named player of the domestic one-day series, sharing the honour with Bulls teammate Marnus Labuschagne, who was unavailable due to Test duty.

Khawaja missed out with the bat on Tuesday but looked to have made the telling play when he threw specialist batsman Matthew Renshaw the ball as Marsh and Stoinis’ counter attack threatened to snatch the game away.

Stoinis looked set to help himself to a fourth six of his innings, only to thrash Renshaw’s half-tracker to Sam Heazlett on the boundary in the 27th over, sparking a mini collapse.

But Marsh and Agar held their nerve to ensure WA clinched its second domestic one-day title in three years.

Earlier, Jhye Richardson (3-35 off 10 overs) and Nathan Coulter-Nile (3-47) ripped through Queensland’s top order, including the prized scalp of Khawaja after WA won the toss.