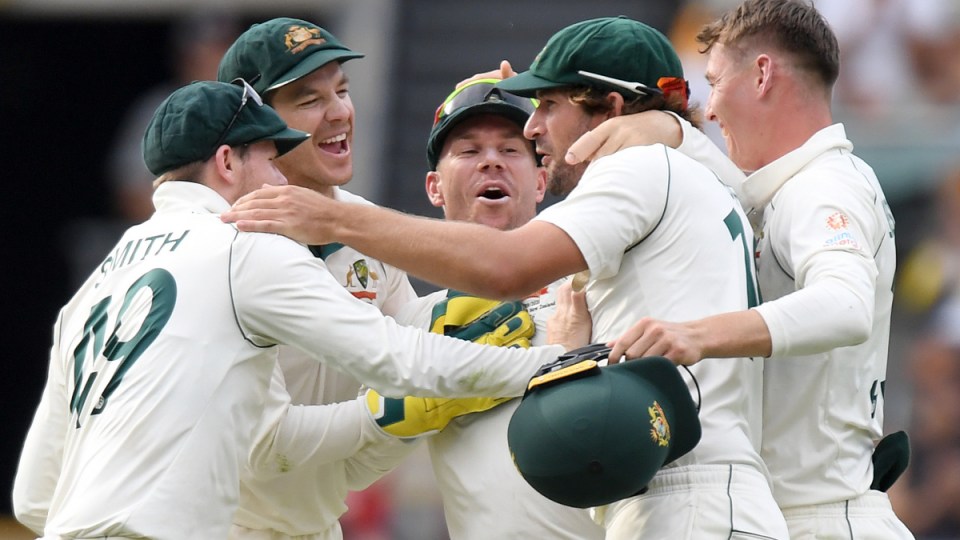 The Australians celebrate after winning the first Test at the Gabba, Photo: Getty

Australia will go into Adelaide’s second Test against Pakistan knowing that it has finally found a combination that can set a big target and press home the advantage.

Although the home side did not have it all its own way on day four of the first Test at the Gabba, there was much for skipper Tim Paine to rejoice about – not the least the performance of the openers and the ability of the team to shine even when Steve Smith failed.

Winning by an innings and five runs in their series opener in Brisbane, Australia is now set to take the same team to South Australia.

“Every time you pick, you want to be able to stick,” captain Tim Paine said on Sunday evening. .

“It’s been hard to have stability because we haven’t been performing as well as we would have liked.

“I think we have nutted out a really good group at the moment; a group that can still get a lot better as well which is a really pleasing thing.”

Joe Burns locked himself in as David Warner’s long-term partner, combining for a 222-run stand at the top as the pair showed why they loved batting together.

Warner silenced any questions over his own form, with his 154 from 296 balls in the first innings eclipsing his total runs scored and deliveries faced from the whole Ashes series.

Marnus Labuschagne also looks a lock at No.3, with his maiden hundred becoming a big one of 185 as Australia cruised to 580 in their first and only innings.

Australia’s ability to score runs without Smith firing was also crucial, given they passed 300 in an innings in which he had failed for the first time since the 2014 Boxing Day Test.

“We’ve known Burnsy is a quality opening batter for a long time. It was great to have him back in the side and he’s got a great combination with Davey.

“Marnus was given some opportunities 18 months ago when some people thought he shouldn’t have. But I think selectors saw the talent he had.

Josh Hazlewood took four wickets in the second innings, while Pat Cummins and Mitchell Starc also chipped in to have Pakistan all out for 335.

The end didn’t come as quick as the Aussies would have liked.

But when Nathan Lyon had Babar caught behind and Muhammad upper-cut Hazlewood to third man on 95, it left the tail open and Hazlewood capitalised.

Starc finished with seven wickets for the match, rushing through the tail in the first innings and claiming two early scalps to run through their top order in the second.

Amid some tough spells on Sunday, he still looks a more controlled bowler this summer after making small tweaks to his action while sitting out most of the Ashes.

Cummins again showed hit potency as both an opening bowler and at first change.

He grabbed the first scalp of the summer which kickstarted a Pakistan collapse from 0-75 to 4-78 in the first innings.

The quick also removed Asad Shafiq on the third evening, after the right-hander had been a thorn in Australia’s side in the first innings.

Pakistan don’t have the same such luxuries as they head to Adelaide on Friday for the second and final Test.

The tourists admitted on Sunday they would rethink their batting line-up after none of their top three passed 50 in either innings.

The pressure is also on to return Muhammad Abbas to the team after his controversial omission for the Gabba.

Pakistan captain Azhar Ali knows playing catch-up in Australia doesn’t work, calling on his side to take their chances in the second Test.

“When you play Test cricket in Australia, you cannot afford to go behind as it is very difficult to then catch up,” Azhar said.

The way we won the toss and we played in the first session without losing a wicket, that was an opportunity for us to go in front and take the initiative in the game.

“That chance we lost in the second session and that made sure we could’t reach the kind of total we needed to put pressure on them.”

Azhar said they would “rethink their strategy” in an indication changes could be made to their misfiring top six, while he backed their bowlers after omitting the experienced Mohammad Abbas in Brisbane.

“The young attack has a lot of potential but you can’t buy experience and it’s never easy in a place like Australia,” he said.

“I believe if they manage to do that (bowl in good areas) from the start of the innings, they’ll be a totally different attack after that.”

Cricket: Australia looks forward to Adelaide and a settled team