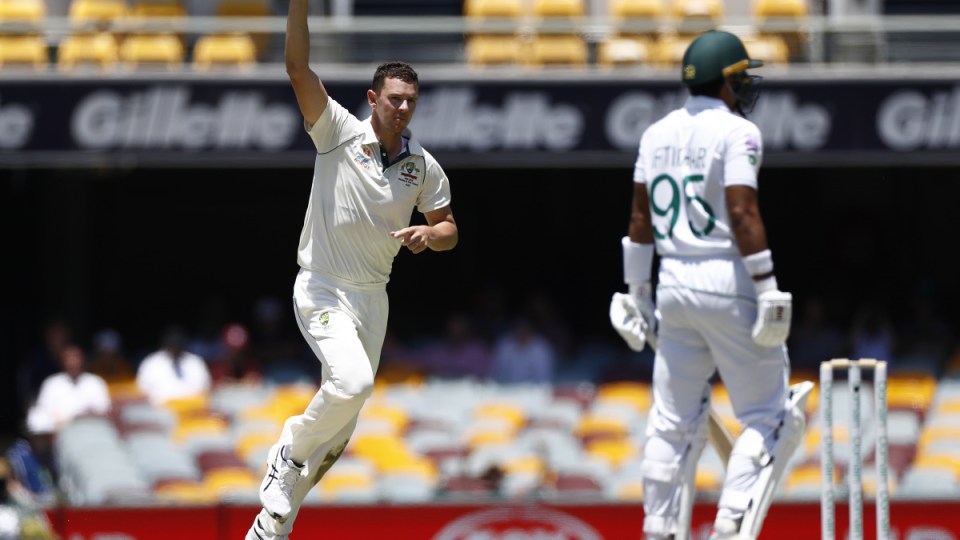 Australia has won the first Test at the Gabba by an innings and five runs, seeing off a Pakistan rearguard action on the fourth day.

Babar Azam and Mohammad Rizwan had steadied the ship before Australia regained the momentum late in the afternoon session.

Azam notched 104 before falling caught behind to Nathan Lyon, while Rizwan fell just short of his maiden century, holing out to Nathan Lyon off the bowling of Josh Hazlewood.

Pakistan was 5-155 at lunch after earlier looking like collapse was imminent before Babar and Rizwan came together for a 132-run partnership.

Lyon, working on a pitch that has not offered a lot for his spin, varied his pace and Babar gave a slight edge to Tim Paine soon after the afternoon drinks break.

Rizwan then took up the cudgels, pushing his score to 95, the highest score for a Pakistan wicketkeeper in Australia.

Yasir Shah chipped in for a handy 42 before being caught by Matthew Wade off the bowling of Hazlewood, who finished with 4-63.

Australia started the day seven wickets away from taking a 1-0 lead in the two-Test series, with Pakistan resuming at 3-64.

The home side struck when Pakistan was in the 90s, with Pat Cummins removing Shaan Masood, who tried to hook and was caught behind by Paine for 42.

Soon after Josh Hazlewood had Iftikhar Ahmed caught behind for a four-ball duck.

Lyon toiled most of the day without luck but told Channel Seven at lunch that he was seeing a bit in the pitch.

“We’ve got some decent plans in place and if we challenge their defence for long enough, then we’ll get the reward,” Nathan Lyon

Mitchell Starc ended with 3-73 after dismissing Pakistan captain Azhar Ali lbw on Saturday evening in his second over, and nicked off Haris Sohail in his next from another poor shot by the disappointed No.3.

Cummins’ wicket also came from an edge, although his ball that angled across Asad Shafiq was much more difficult for the batsman to negotiate.

“The process here is quite simple,” Australian batsman Marnus Labuschagne said when asked of Sunday’s plans.

Keep bashing the wicket – it looks like Nathan (Lyon) is getting some spin out there, especially to the leftie.

“There’s little bit of up and down so, hopefully, we can get a few hitting in the cracks and staying low.”

Australia has been thrilled at the return to form of David Warner, who hit his first century since the ball-tampering ban, while Joe Burns locked himself in as his opening partner.

Labuschagne has also solved the problem of No.3, having knocked off his first Test century on Saturday with an impressive 185.

Matthew Wade also hit a half-century, with Travis Head and Steve Smith the only men in the top six to miss out.

Indeed, given the only batsman of note to fail in Brisbane was the World No.1 Smith – who fell for only four – the home side will be feeling confident that there’s plenty of batting improvement to come.

That Smith failed, and Australia still soared, is a thrilling development for coach Justin Langer.

Indeed, it was the first time since the 2014 Boxing Day Test that an Australian side featuring Smith passed 300 without the star batsman making double figures.

Captain Tim Paine spoke last week of the need for others to stand up, admitting the Aussies relied too heavily on the man dubbed “the best since Bradman” in the Ashes.

“The way Wadey came out and played and the way Davey and Joe played day two, you can’t ask for a better start for your openers.

“They really took the sting out of the attack and allowed the guys batting at No.4, five and six to capitalise.”

Labuschagne has at times been compared to Smith for his mannerisms.

He fidgets like him, regularly played with the bails while batting on Saturday and even uses the Star Wars lightsaber leave.

“I have been doing that for a long time before I played, but the boys will say otherwise,” Labuschagne said.

“I’m quite a visual learner, so subconsciously maybe. What better person to copy than the guy who averages 64.”

Australia wins first Test by an innings and five runs