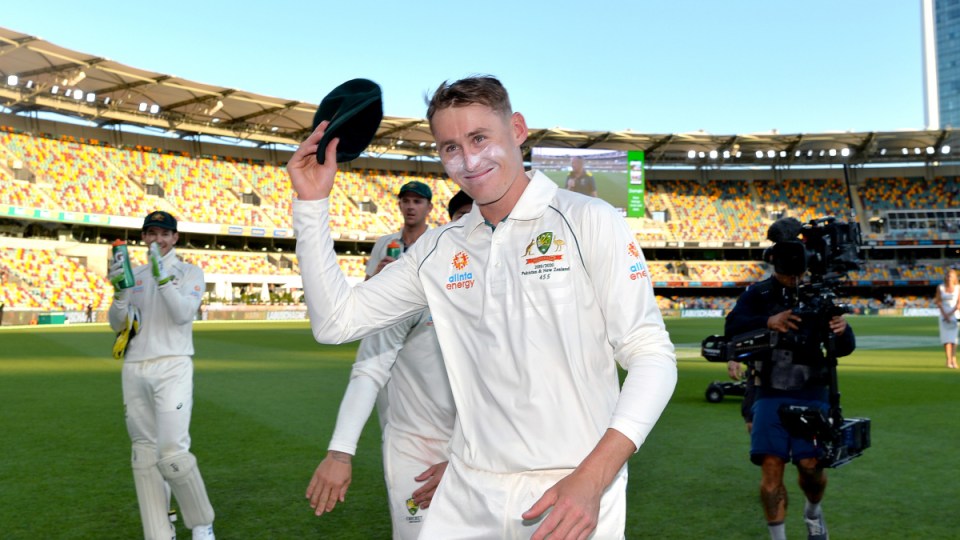 Australia heads into day four of the first Test at the Gabba knowing that Pakistan is on the ropes, but also aware it may have found the solution to the batting woes that bedevilled the Ashes campaign.

Indeed, given the only batsman of note to fail in Brisbane was the World No.1 Steve Smith – who fell for only four – the home side will be feeling confident that there’s plenty of batting improvement to come.

David Warner’s resurgence has restored the natural order, but the emergence of Marnus Labuschagne has further bolstered the line-up, his maiden Test ton continuing his strong form on debut in England.

That Smith failed, and Australia still soared, will be a thrilling development for coach Justin Langer. Indeed, it was the first time since the 2014 Boxing Day Test that an Australian side featuring Smith passed 300 without the star batsman making double figures.

Pakistan went to stumps at 3-64 on the third day at the Gabba, still needing another 276 to make Australia bat again after the hosts’ first-innings 580.

Mitchell Starc was the late destroyer on Saturday, trapping captain Azhar Ali lbw and having Haris Sohail caught behind, with Pat Cummins getting Asad Shafiq for a duck.

But Labuschagne was the day’s hero, with his stroke play and easy-going manner taking him to his highest first-class score of 185 and beyond Warner’s 154 as Australia’s best bat.

Matthew Wade added 60 to go with Joe Burns’ 97 at the top on Friday, with Steve Smith the only member of the top five not to pass 50.

The issue of scoring runs when Smith failed has long been an issue for Australia.

Captain Tim Paine spoke last week of the need for others to stand up, admitting the Aussies relied too heavily on the man dubbed “the best since Bradman” in the Ashes.

“The way Wadey came out and played and the way Davey and Joe played day two, you can’t ask for a better start for your openers.

“They really took the sting out of the attack and allowed the guys batting at No.4, five and six to capitalise.”

Labuschagne has at times been compared to Smith for his mannerisms. He fidgets like him, regularly played with the bails while batting on Saturday and even uses the Star Wars lightsaber leave.

“I have been doing that for a long time before I played, but the boys will say otherwise,” Labuschagne said.

I’m quite a visual learner, so subconsciously maybe. What better person to copy than the guy who averages 64.”

Labuschagne was superb. He endured some nervous moments in the 90s but otherwise drove masterfully down the ground and worked the ball behind the wicket with ease.

The Queenslander roared in joy when he converted his fifth 50 into a maiden ton, edging Shaheen Shah Afridi for four to bring up triple figures.

“It was amazing,” Labuschagne said. “I tried to get too square and I was lucky enough I got a thick edge through the gully region.

“Then it was just looking back seeing it trickle along the ground, thank you. A dream come true. I think my career so far’s been a bit peculiar, to be honest. I took a catch, wicket and run-out before I got a run.

“There was a time there in Dubai that I didn’t think I was going to make a Test run. The way it’s all unfolded is definitely not the way I pictured it in my mind,”

He looked set to make it a double century, before an edge from Shaheen (2-96) this time went to gully shortly after tea as Australia’s lower-order fell around him.

His knock further strengthened Australia’s top-three security, with Burns looking a lock at the top alongside Warner after Friday’s 222-run opening stand.

Warner earlier added just three to his overnight score in a tough first hour on Saturday, becoming teenage sensation Naseem Shah’s first Test victim when he was caught behind trying to evade a short ball.

Smith fell moments later, out to Yasir Shah (4-205) for the seventh time in his career when he was bowled trying to hit a full ball behind square on the legside.

Having overlooked Mohammad Abbas, there’s also been criticism of the move to pick an inexperienced pace attack. The young quicks took 4-237 between them, with the trio of Imran Khan, Naseem Shah and Shaheen Shah Afridi along with the spinners failing to build pressure.

Meanwhile Mohammad – who took 17 wickets at 10.58 when the two teams met last in the UAE –  watched on from the sidelines.

“Mohammad Abbas has been a match-winner for us over the last 18 months,” bowling coach and former Pakistani star Waqar Younis conceded. “(But) unfortunately he isn’t at his best rhythm. Recently back on the New Zealand tour, he had an injury.

“So he hasn’t been bowling as well as he has in the past against Australia and in England. But we’re not losing hope with him. He’s still our main man and we are going to take a very close look and we’ll think about it in Adelaide.”

First Test: Australia finally finds a batting line up to build on