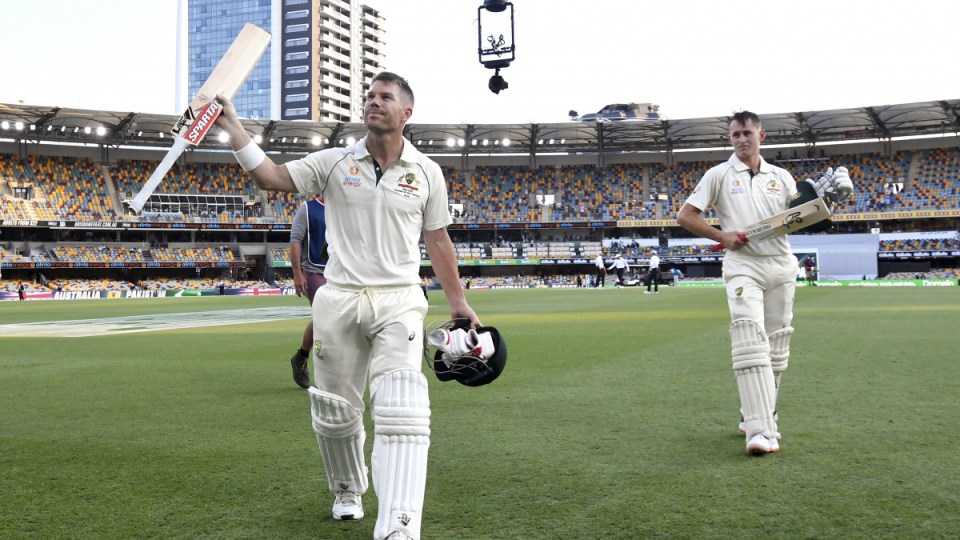 David Warner is applauded off the Gabba after his big century. Photo: AAP

A day after David Warner’s stunning return to form, Australia goes into Saturday’s third day of the First Test at the Gabba looking to bat Pakistan out of the match.

Having survived a no ball dismissal on 56, Warner will resume on 151 alongside Marnus Labuschagne on 55, with Australia on 1-312.

That’s already 72 runs ahead of Pakistan’s first innings total of 240 with the world’s No.1 batsman Steve Smith still cooling his heels in the sheds.

Warner’s 222-run partnership with Joe Burns – who was agonisingly bowled for 99 – was the pair’s fourth century stand in 10 innings together.

They average more than 50 as a combination and at Gabba their record is even stronger, with their 620 runs combined in three innings at the ground the most productive of any pairing in history.

Warner told reporters after the match that he’d put his Ashes failure behind him and had not felt any pressure as he sought to play himself back into form.

“I wasn’t out of form, I was out of runs,” Warner said. “Today I had a little bit of luck. That’s what you need in the game. Over there I didn’t have much luck at all.”

Warner said that the Capetown ball tampering suspension had one upside, which was spending more time with his family.

To have that time off and the time to reflect, and just get away from the game … there is a lot more to life than just cricket …

“You don’t get that when you’re travelling all the time. I really enjoyed that time off. Obviously I’m back now and I’ve got to keep working hard and keep being respectful of the game because it can bite you on the backside very fast.”

Warner and Burns had spent 30 minutes in the nets this week running together each time they believed a single was hit, and carried that mentality onto the Gabba.

“We just have this energy about us when we’re out there,” Warner said.

“We communicate a lot when we’re out there … But the most important thing is rotating strike. When we do that well, it’s hard for bowlers to put you on the spot.

“I know where he looks to get off the strike as well … we do that really well.”

Burns’ combination with Warner is believed to have been part of the reason for his recall after being dropped before the Ashes.

“You get down the non-striker’s end, you look up and the scoreboard’s ticking along. There’s no pressure to score.”

And while Pakistan will need to review its tactics going into day three, the umpires are also facing pressure to call no-balls correctly on the field after Pakistan teenager Naseem Shah was denied his first wicket for overstepping.

The 16-year-old had Warner caught behind for 56 shortly after lunch at the Gabba on Friday’s second day, before the third umpire via replays ruled he had overstepped.

However, it came after several other front-foot no-balls from the debutant had been missed earlier in the day by on-field umpire Richard Kettleborough.

Several former players argued that had Naseem been called earlier, he would have adjusted his run-up by the time he had Warner edging.

It came after Pat Cummins claimed the scalp of Muhammad Rizwan, caught behind on Thursday, before replays showed he had appeared to overstep.

On that occasion, third umpire Michael Gough controversially ruled the delivery to be a fair ball.

The International Cricket Council announced in August a six-month trial in limited-overs matches in which the TV umpire would adjudicate on all no-balls.

In turn, they would communicate the information to on-field umpires within seconds regardless of whether it was a wicket-taking delivery.

A similar trial was held in 2016 when third umpires would signal, onto an umpire’s watch on field, when a no-ball had been bowled.

However, it’s believed the costs and logistical hurdle of implementing the technology across the world stopped it progressing further.