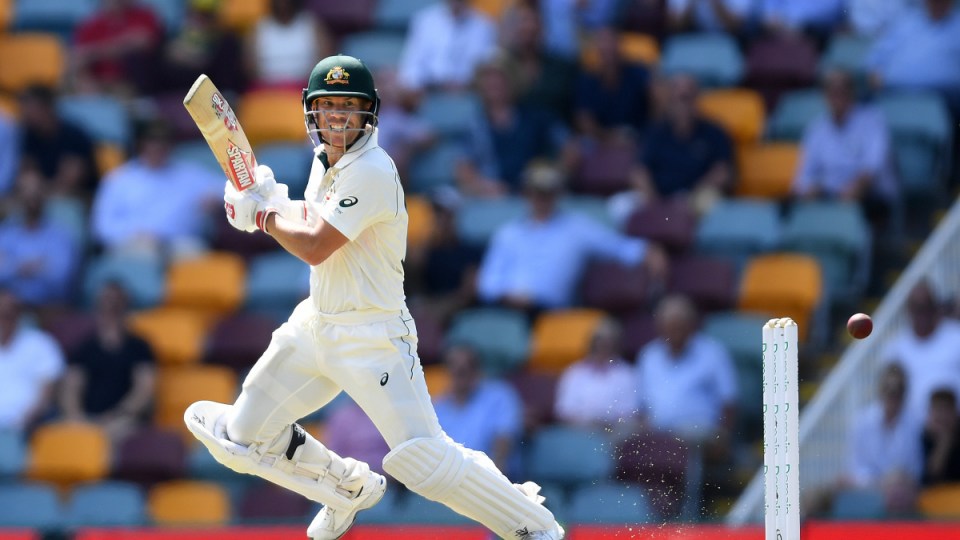 Australian coach Justin Langer has hailed the effort of openers David Warner and Joe Burns as Australia powered to a commanding position after passing 300 on the second day of the first Test at the Gabba.

Warner put his Ashes woes behind him to notch his first century since the 2017 Boxing Day Test – then he gave Pakistan mopre of the same to end the day while Burns was bowled agonisingly short of the ton by Yasir for 97.

Having opened the batting on Australian soil for the first time in two years, Warner batted with determined aggression throughout the morning session.

In the Ashes series he only managed 95 runs, putting a question mark over his comeback from the Capetown ball tampering suspension, which was only alleviated by his recent good form in Twenty20.

The former vice captain escaped a lapse of concentration on 56, being given out caught behind only to discover Pakistan teenage debutante Naseem Shah had overstepped his mark.

Soon after Warner was given out after another Naseem thunderbolt, but replays showed the debutante was well over the line and Warner was recalled

Australian coach Justin Langer said told Channel Seven he was thrilled that the openers had shown their best.

“[There was] a bit of pressure on David Warner coming into this test match after the Ashes,” Langer said.

He is a good player, he worked so hard and his running between wickets has been unbelievable. Hopefully he can’t be a big hundred.

“Joe Burns has been the same. I have talked about this a lot, the partnership, they get on well and they are good mates … [with] chemistry. They are showing it today.”

The opening overs of the innings were nervous ones for Burns, with a feathered ball behind not picked up by the Pakistan wicketkeeper and a close call run out opportunity.

Naseem was brought into the attack when Australia was 0-34 and bowled as fast as 147 kmh before tiring late in his spell.

Naseem on Thursday became the youngest man to make a Test debut in Australia when he went out to bat and managed to avoid becoming a victim of a Mitchell Starc hat trick.

His nervous, awkward prod hit the inside edge and somehow missed the stumps, then he was almost run-out when batting partner Asad Shafiq sent him scrambling back into his crease.

Naseem then ducked some well-directed bouncers and bravely drove Starc down the ground before becoming the final wicket to fall as Pakistan finished with 240.

The tearaway quick, on the back of just seven first-class games, has been compared to Dennis Lillee and was in tears when accepting his cap from Waqar Younis earlier in the day.

New bowling coach Waqar is a massive fan of Naseem’s though and, having admired his strength while mourning with his mother’s death last week, says he’s ready to show what he has got.

“The last week or so, it’s been really tough on him and all we did was give him a soothing hug, kept our arms around him,” Waqar said on Fox Cricket.

“We wanted to send him back for the funeral but his family, his brothers said you can’t really make it in time, so stay back (in Australia).

“Since then he’s been really strong actually, so I’m looking really forward for him to run in and bowl some good deliveries.”

Emotional debut for Naseem Shah. In some way or the other, when we achieve something, we want our parents to be proud of us. His mother could not see him wear a Pakistan cap but InshAllah he will make her proud. #PAKvsAUS pic.twitter.com/3Z7SiSitBs

Waqar was plucked from obscurity to debut for Pakistan at 17 but says Naseem, identified at the late Abdul Qadir’s academy, was different.

“He’s come through some under-15s, played some first class games (taking 27 wickets at 16.66) and he’s much better than me when I was his age,” Waqar said.

“What he presents … he’s very smart, knows exactly what he’s doing with the ball and that’s why we chucked him in Test cricket.”

Confidence doesn’t appear to be an issue either, according to 33-year-old Asad.

“I think he was giving me advice,” he said of their brief but eventful partnership. He is confident enough. Before the game he was very confident and it shows very good things. He is a very strong character and that will help in his bowling.”

‘He’s back’: Warner notches century after surviving ‘no ball’ scare