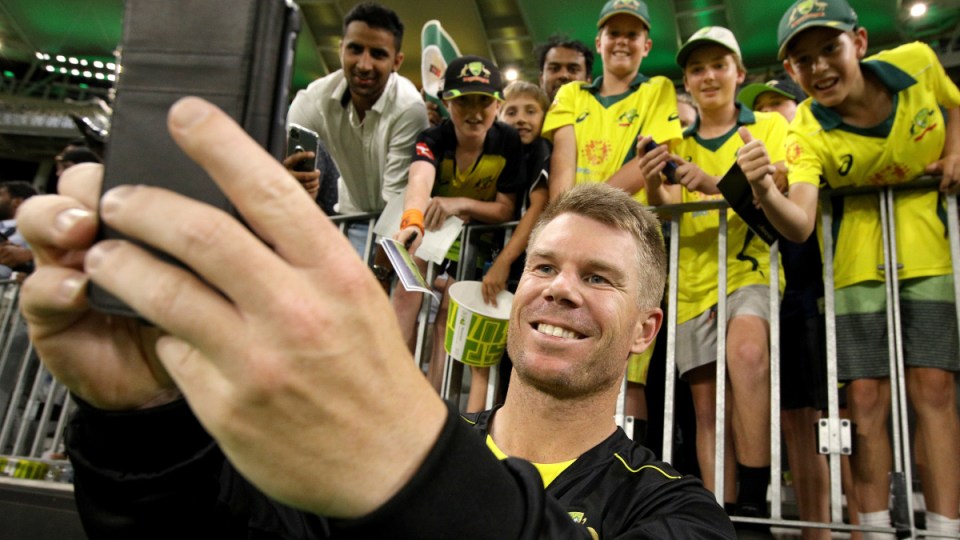 David Warner rediscovered his form in the Twenty20 arena, but crowds were a big part of it. Photo: AAP

Ahead of the Ashes series the big questions revolved around whether Steve Smith and David Warner would return undiminished from their ball tampering suspensions – the answers were only positive for the former skipper.

While Smith plundered the English attack, Warner scored only 95 runs at an average of 9.5.and returned to Australia with questions over his future in the Test team.

With former Australian skipper on the weekend comparing Smith to Don Bradman, Warner in comparison has had to make do with rebuilding his positives in the Twenty20 arena.

Now, Australian spinner Nathan Lyon is backing Warner to return to form in the two-Test series against Pakistan, starting on Thursday in Brisbane.

“Dave is a world-class player. I’m expecting him to come out here and play exceptionally well,” Lyon told reporters on Saturday.

No doubt, he would have been down and disappointed about the Ashes that he had. But he was still part of the side to go over there and retain the Ashes, which is pretty bloody special, if you ask me.”

Warner fell to England paceman Stuart Broad in seven of his 10 digs in the Ashes, but Lyon said Warner had learnt from that experience.

“I know when I’m bowling to someone who I’ve got the wood over, it can play on their mind,” the spinner said.

“So no doubt, Davey would have felt the pressure. But it’s one of those things where you need to accept the challenge and move on and try to get better.”

The pace battle between Australia and Pakistan is set to be a major drawcard at the Gabba.

Australia will boast Pat Cummins, Mitchell Starc and Josh Hazelwood in the attack.

But Lyon also had another message – don’t forget about me.

While the juicy Gabba deck is traditionally a paceman’s paradise, Lyon has also thrived at the venue, snaring 33 wickets at an average of 27.7 over eight Tests.

“I love playing cricket here. I think it’s a good contest between bat and ball. Personally, I find I get a fair amount of bounce and a bit of spin over the last couple of years as well.”

The Australians are also hoping from another big series from Steve Smith, with former Australian captain Allan Border comparing the in-form batsman to Bradman.

Smith maintains the second-highest Test average behind Bradman with 64.56 and he needs a mere 17 runs in his next seven innings to be the fastest player to reach 7000 Test runs.

According to Border, it’s the right-hander’s consistency and ability to avoid successive failures that sets him apart.

“Most people have that patch where everything goes wrong and they go through a trot,” Border told AAP.

“I don’t know if it happened to Bradman, but everyone else has had one.

“They always had a few Tests or a series where it just didn’t work for them or you got the better of them. But Steven has just been incredible.

“Not just in the Ashes but his whole career. I’ve not quite (seen anyone else do it).”