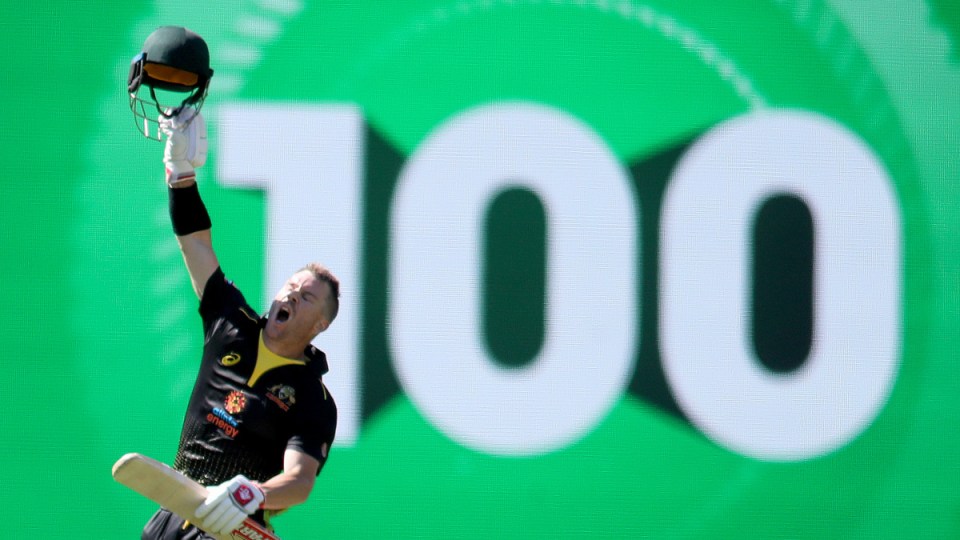 Australian opener David Warner had forgotten the feeling of being cheered until hammering his maiden Twenty20 international ton in a record win against Sri Lanka.

Sri Lanka stumbled to 9-99 in reply as Australia emphatically took a 1-0 lead in the three-game series.

Warner, on his 33rd birthday and in his first home international since being banned for ball tampering, leapt wildly into the air on reaching his milestone from the last ball of Australia’s innings.

And after a winter of copping English jeers, Warner is feeling the love again from Australian fans despite a lowly Adelaide attendance of 16,268.

“It’s always fantastic to get that … you forget how much it actually drives you when you’re out there,” Warner said of the crowd support.

“I think they don’t realise how much of an impact it has for us players.”

The trio made a mess of seamer Kasun Rajitha, who finished with 0-75 – the most runs conceded in a four-over spell in T20 internationals.

“You actually forget that you don’t have one,” Warner said.

Maxy reminded me, saying ‘welcome to the club’ which was quite funny.”

Warner set a rampant tone with Finch in a opening partnership of 122 runs from just 10.5 overs.

The pair reached their half-centuries in the same over, both by smacking consecutive sixes from the hapless Rajitha.

Maxwell and Warner put on 107 runs and their century stand took just 52 balls.

Australian pacemen Mitchell Starc (2-18) struck in the first over and Pat Cummins (2-27) was on a hat-trick in the fourth over but was denied the rare feat.

The series continues on Wednesday in Brisbane with the last game on Friday in Melbourne.

‘I am not afraid’: The modern unknown soldier risks it all in Ukraine
Greens sign up for Labor’s looming jobs-and-skills summit as Liberals stick with boycott
Joe Biden’s $430b green victory for the environment
China cementing its Thailand ties with joint military exercises
NRL: Titans frantic to end 10-game losing streak as Manly showdown looms
AFL: Western Bulldogs cling to finals hopes after GWS thriller
Finch cleared to play as summer of cricket gets underway in Adelaide
Today's Stories