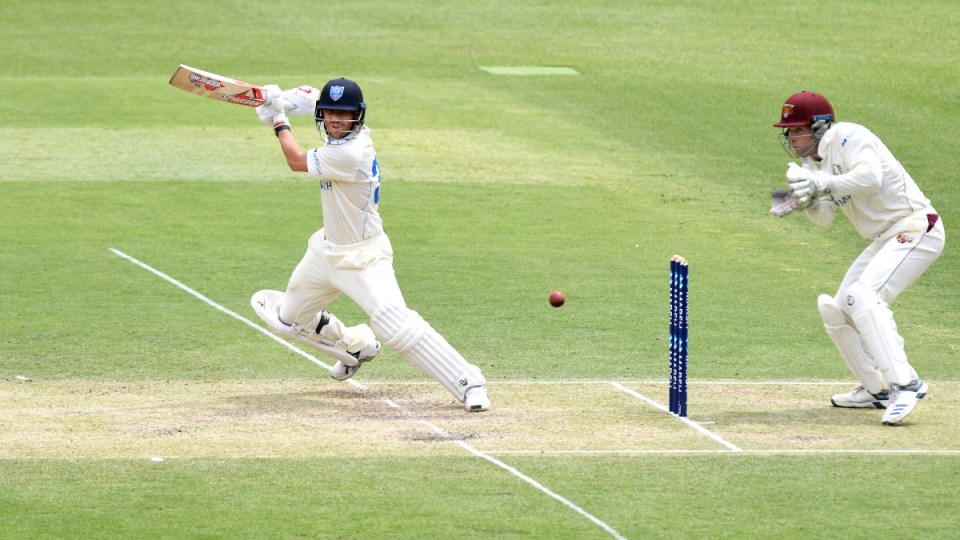 David Warner on the attack in the Sheffield Shield. Photo: Getty

Australia’s Test selectors are breathing a huge sigh of relief, as David Warner and Marcus Harris bounce back to form in the Sheffield Shield with timely centuries.

Just who should be given first crack at opening this summer was a huge talking point after Warner, Harris and Cameron Bancroft all failed to fire during the Ashes.

Harris produced a perfect answer to that question on Thursday when he cracked 116 for Victoria against South Australia.

And Warner followed suit on Friday, producing a classy 125 off 221 balls for NSW against Queensland at a rain-affected Gabba.

Warner averaged just 9.5 with the bat during his woeful Ashes campaign.

National selector Trevor Hohns opened the door for Warner’s axing when he failed to guarantee the veteran would be selected for the start of this summer’s Test series against Pakistan.

Hohns had said two or three spots in the Australian batting line-up were up for grabs.

But Warner and Harris have gone a long way towards locking up their berths in time for the first Test against Pakistan from November 21 at the Gabba.

Importantly, that venue is where Warner had scored his century on Friday.

“For us, we know what our job is – our job is to score runs,” Warner said in relation to the recent comments by Hohns.

“If you’re not doing that, rightfully so, you’re probably not going to get picked.

“You back yourself in. I know, at home, I’ve got a great track record. You just trust your game plan – that’s all you have to do as a cricketer.”

England paceman Stuart Broad removed Warner in seven of 10 innings during the Ashes.

Warner admitted it was difficult to come up with a defence to Broad’s tactics.

“All my hard work and preparation was for the ball going away from my bat,” Warner said.

“To his credit, he bowled extremely well. I looked back and he pitched the ball up 18 per cent more of the time than in his career.

“The ball was going in and away. On those kind of wickets, it’s quite challenging.

“Me and Harry (Harris) spoke about it quite a lot – what can you do?

If it’s in your first 10 balls that you’re out there and you get a good one like that, you can’t do anything.

“I spoke to Broady about the one he bowled me in Lords, and he said to me, ‘It’s probably one of the best balls I’ve ever bowled’.”

Victoria’s Nic Maddinson finished with 224 in the Bushrangers’ monster 6(dec)-616, while rising star Will Pucovski posted 123 to also keep his name in the Test mix.