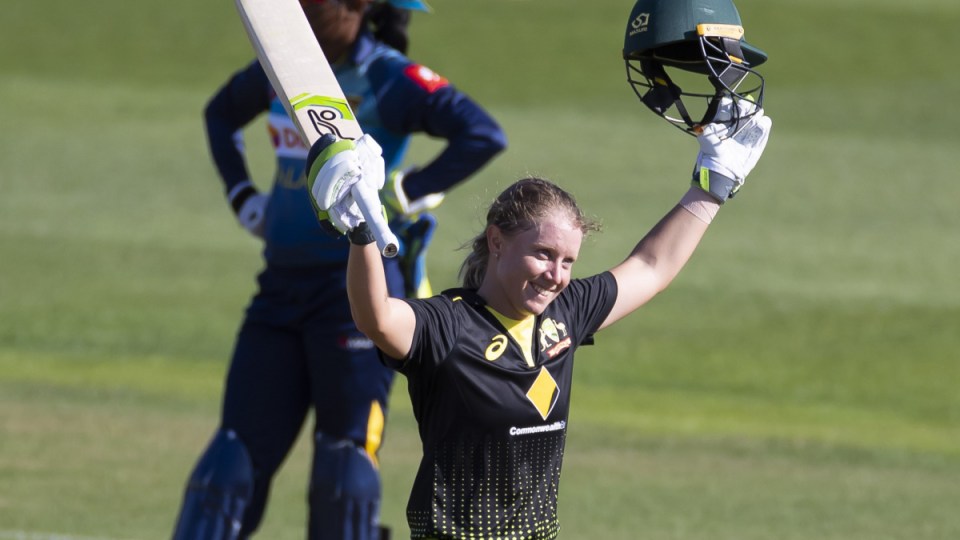 Alyssa Healy acknowledges the crowd after bringing up her century on Wednesday. Photo: AAP

Alyssa Healy set a world record for the largest score in women’s Twenty20 cricket as Australia enjoyed a 132-run win in the third and final match against Sri Lanka at North Sydney Oval.

Healy batted through the innings on Wednesday to end unbeaten on 148 off just 61 balls, propelling Australia to a mammoth total of 2-226.

Healy’s stunning innings, which is the largest T20 score by an Australian woman, included 19 fours and seven sixes.

The opener reached her world record with a six in the penultimate over, eclipsing teammate Meg Lanning’s 133 set against England in July.

Having celebrated her 100th T20 international two days ago, Healy comfortably passed her previous best of 90.

After surviving a tough leg-side stumping early in her innings, Healy was at her free-flowing best as she scored the fastest T20 half-century by an Australian, and the second quickest ton in women’s international T20 matches.

Healy brought up her 50 off 25 balls, and then motored to her ton off just 46 deliveries.

Looking to wrap up a clean sweep of the series Australia, raced to 100 in the 11th over for the loss of opening-match century maker Beth Mooney (14).

A 109-run second wicket partnership finally came to an end when Rachael Haynes departed for 41 off the bowling Sri Lanka captain Chamari Athapaththu (2-27), but there was no respite as Healy maintained her assault.

Ama Kanchana felt the full brunt of the attacking intent as she conceded 47 runs off two overs, including two wides.

In response Sri Lanka was never in the hunt, eventually managing 7-94 off its allotted overs.

The visitors’ hopes of posting a significant score went with the dismissal of Chamari Athapaththu for 30, with the star opener bowled by Nicola Carey (3-15).

Harshitha Madavi also compiled 28 off 33 balls before being caught by Healy off Carey’s bowling.

Tayla Vlaeminck, Megan Schutt and Georgia Wareham each chipped in with a wicket in the comprehensive win.

The two sides now turn their attention to a three-match one-day series that begins at Brisbane’s Allan Border Field on Saturday.

Part of the ICC Women’s Championship, the one-day series includes matches at the same venue on Monday and Wednesday.