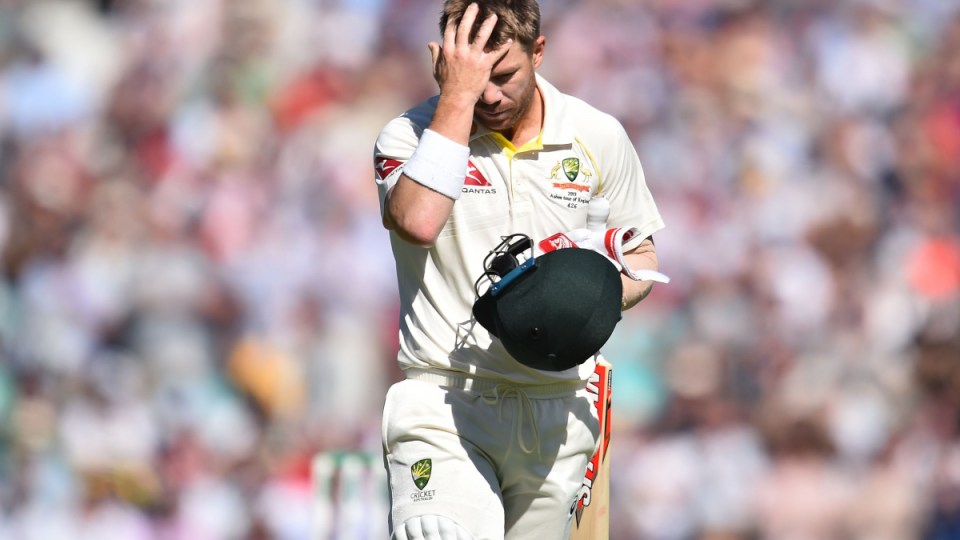 David Warner trudges off The Oval after his final failure in the Ashes series. Photo: Getty

The lead-up to the Ashes was all about how three men – perhaps four, if you throw in accidental skipper Tim Paine – would handle themselves in the aftermath of the Cape Town ball-tampering suspensions.

There was one winner. Steve Smith.

His 774 runs for the series are only bettered by three Australians: Don Bradman, Mark Taylor and Neil Harvey.

Like the series itself there’s a case to be made that Paine and Cameron Bancroft had a drawn result.

Paine did what all captains aim to do, retain the Ashes, but his snafus with video referrals at key times cost at least one win and his decision to bat, not bowl in the fifth Test also took the gloss off a possible series won that became a series drawn.

Bancroft’s return from his nine-month suspension, and the ignominy of stuffing sandpaper down his jocks, culminated with two Ashes Tests at Edgbaston and Lord’s, for returns of eight and seven and 13 and 16.

In the search for an opening combination that worked, Bancroft again took the fall, but he is only 26 and his time may yet come.

So drumroll please for the loser in this scenario …. yes, David Warner.

Unlike Bancroft, selectors stuck with the senior man and once-formidable run machine. It was only July 6 after all when he smashed 122 against South Africa in a World Cup match.

For ten Ashes innings Warner took guard and looked the part. For seven of those innings he headed back to the pavilion under double figures, three of them ducks.

Warner’s 95 runs for the series is the least by an opener playing 10 innings in a series in the history of Test cricket – and that includes his fighting 61 at Leeds.

The opener has long provided the swagger and strut of the Australian team, something that in no small measure contributed to the ball-tampering debacle.

He’s been loved and loathed in equal measure and in 79 Tests his straight-at-it attacking style sees him averaging 45.47, only slightly below his ODI average of 45.77.

His demeanour has also been good throughout the series, taking the incessant and mindless booing from the English crowds in his stride.

So where to now? At 32 he’s not exactly washed up but, having tried various methods to counter his fragility when facing England paceman Stuart Broad, it’s definitely time for selectors and players to have a rethink.

Broad snared Warner seven times in the series by targeting the stumps from around the wicket, thus giving Warner less room to attack. The lbw in the first innings of the first Test set the scene.

He was also unlucky at times, with his caught behind dismissal off Jofra Archer in the first innings of the fifth Test coming after one of Test cricket’s longest video reviews.

Warner still contributed strongly in the field, his slips catching seemingly unaffected by the batting mind games, but with calls for his first omission since debut even before the fifth Test there’s likely to be an even stronger mood for change.

Despite all the rivalry, the boos and the none too clear cut result, at the end of the fifth Test the players all shared beers in the English rooms after the match.

In a photo tweeted by England’s communication manager Danny Reuben, Warner is captured beer in hand chatting to some English players.

The next Test may be sooner than he thinks.

Only one winner in battle of the comebacks – hint, it’s not Warner