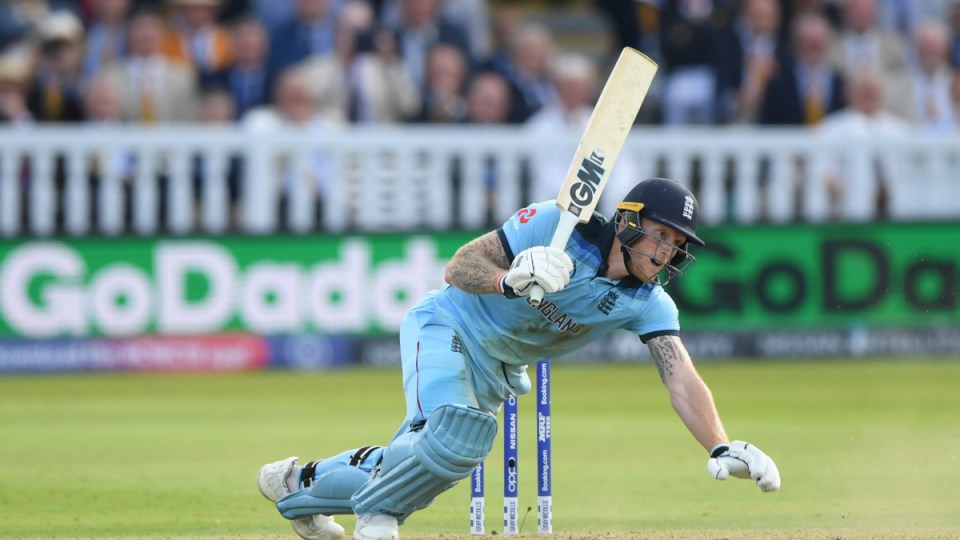 Ben Stokes in action during the controversial last minutes of the final against New Zealand. Photo: Getty

Giles laughed off the suggestion from former international umpire Simon Taufel that the winner should have been awarded only five runs, not six, after the ball ricocheted off Stokes’ bat and crossed the boundary as he dived to make his ground during a dramatic run chase in the dying minutes of the final against New Zealand.

“You can look at so many moments during the day. If that had been the case, Stokesy got a full toss last ball, he’d probably have smashed it out of the park rather than try to nurdle two,” Giles told Sky Sports.

“If you look over there, we’ve got the trophy and I think you’ll find it very difficult to get it out of their hands.”

The hosts triumphed in the cricket World Cup for the first time after beating New Zealand in a sensational finish at Lord’s on Sunday.

After a super-over had been played, England matched the Kiwis’ score of 241 from the final delivery. It was handed the trophy on a boundary countback.

England scored six from the third-last ball when a throw from Martin Guptill rebounded off the diving Stokes’ bat to the boundary.

It since emerged that under cricket’s Law 19.8, extra runs are awarded only if the batsmen have crossed when the ball is thrown, which was not the case on Sunday.

It means England should have received only five runs off the delivery – leaving it with four to win off two balls.

A former five-time ICC umpire of the year and member of the MCC laws sub-committee, Taufel said the on-field officials got it wrong.

“It’s a clear mistake … it’s an error of judgment,” he told Fox Sports.

The result has devastated New Zealand, with a photo of England’s batsmen dashing between the wickets being labelled “the picture that proves umpire error handed England the cricket World Cup” by some sections of the media.

Kiwi captain Kane Williamson has told radio in New Zealand that no one lost the final – even despite England being declared the winner.

“At the end of the day nothing separated us, no one lost the final, but there was a crowned winner and there it is,” he said.

Nonetheless, the result was “pretty tough to get your head around – I think it will take time to reflect with a rational mind”.

New Zealand’s coach, Gary Stead, has also called for a rule change to allow the title to be shared if the final is tied.

“I’m sure when they were writing the rules they never expected a World Cup final like that,” he said on Tuesday.

“It’s a very, very hollow feeling that you can play 100 overs and score the same amount of runs and still lose the game, but that’s the technicalities of sport.”

The ICC said it would not be drawn into the issue of the possible rule breach.

“The umpires take decisions on the field with their interpretation of the rules and we don’t comment on any decisions as a matter of policy,” a spokesperson said.