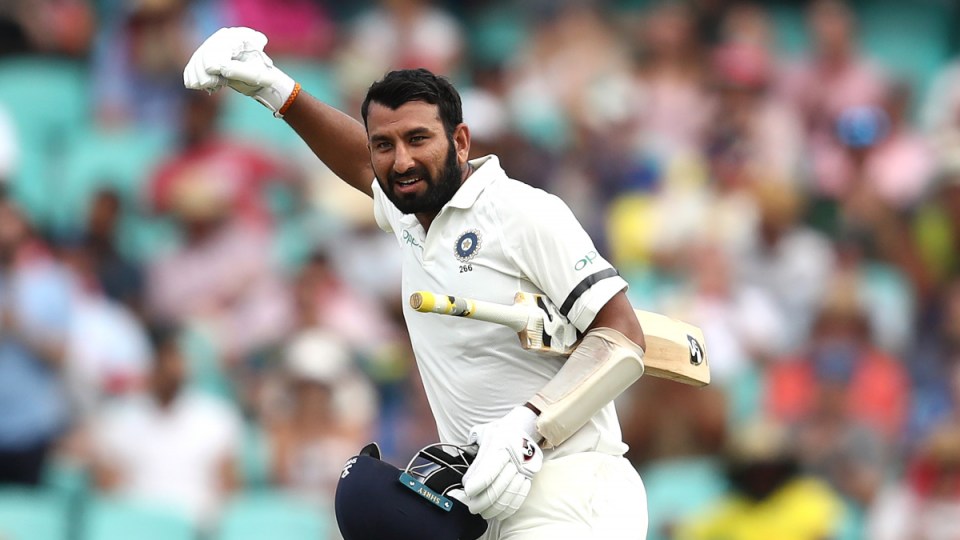 Cheteshwar Pujara (130*) has posted his third century of the Test series in another fine opening-day display at the SCG.

Pujara, who scored 123 in the first Test in Adelaide and 106 during India’s victory in Melbourne, continued to dominate the Australian bowling in an innings that included 16 boundaries.

It was the 18th century of his Test career, and with Hanuma Vihari (39*) resuming with him at the start of day two, a huge score is on offer for the tourists.

It wasn’t easy for Pujara as he found the going tough early. He survived a caught-behind appeal and a decision review when on 12 and was struck on the helmet by a Josh Hazlewood bouncer on 14.

Just after tea, Australian hopes were raised when Hazlewood captured the prized wicket of Virat Kohli (23).

Kohli gloved a ball down the leg side and Tim Paine didn’t repeat his error of day one in Melbourne, holding on to the chance to send the Indian captain on his way.

Hazlewood gets him caught down the leg side #AUSvIND pic.twitter.com/9tEbyepaIW

Ajinkya Rahane (18) was providing patient support for Pujara as the pair put together a 48-run partnership before Rahane was cramped by a rising Mitchell Starc delivery and edged it to Paine.

India had added 108 runs in the afternoon session for the loss of just one wicket to be in a solid position at 2-177 at the tea break.

Agarwal looked on course for his maiden Test century before holing out to Starc to give Australia its second wicket of the innings.

India went to lunch at 1-69 and picked up its strike rate after the break.

Agarwal and Pujara put together a 100-run partnership (178 deliveries) as India’s batsmen prepared to prosper.

At the start of the day, Hazlewood made the early breakthrough for Australia with just his third delivery of the innings as KL Rahul (9)  was out, caught in slips by Shaun Marsh.

The Australian bowlers were hoping to make the most of the overcast and humid conditions early and Hazlewood didn’t disappoint.

But as the day wore on, the Indian batsmen adjusted best to the conditions.

Paine decided to take the new ball before stumps but with Pujara and Vihari set, it was runs – not wickets – that began to flow.

Australia’s day of toil was set in stone from before the start of play.

Kohli’s good fortune at the coin toss continued in Sydney as the Indian captain called correctly again and elected to bat on the opening day of the fourth and final Test at the SCG.

India currently leads the series 2-1 after the victory at the MCG in the Boxing Day Test. Having retained the Border-Gavaskar Trophy, India is searching for a first-ever series win on Australian soil.

Australia swung the changes before the start of play with opener Aaron Finch and all-rounder Mitch Marsh paying the price for the loss in Melbourne. They were replaced by Victorian batsman Peter Handscomb and Queensland leg-spinning all-rounder Marnus Labuschagne.

Labuschagne sent down just the four overs (0-24) while Lyon did a power of work.

The off-spinner ground out 29 overs (1-88) while Hazelwood was the most effective of the Australian pacemen, taking 2-51 from his 20 overs.

After having to bowl more than 170 overs in Melbourne just a week ago, there is more work to do for the Australian bowlers on Friday.

And if recent form is any guide, Australia’s batsmen will be facing a huge challenge to match their Indian counterparts when their turn comes.

Pujara is prince of SCG as India dominates again