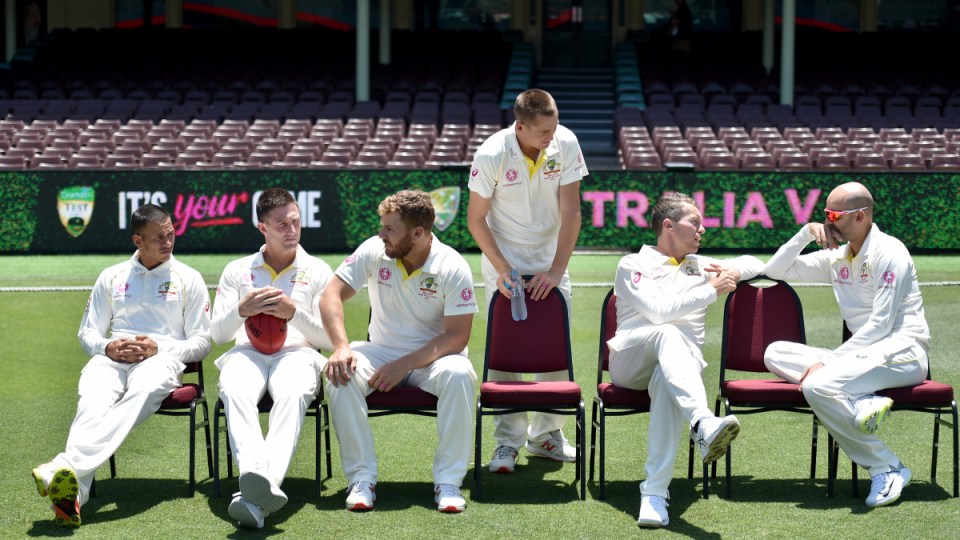 All eyes will be on who is playing for the Australian team when it fronts up to the SCG on Thursday morning for the fourth Test against India.

By all reports, opening batsman Aaron Finch will not be part of the line-up, nor will all-rounder Mitch Marsh.

A story on Cricket Australia’s website hints the pair will be replaced in the XI by Queensland batsman and leg-spinner Marnus Labuschagne and Victoria’s Peter Handscomb respectively.

Captain Tim Paine remained mum on the final squad on Wednesday evening, saying only that the final call will made after one last pitch inspection, and before the toss.

“… we’ll be looking to pick the best XI that we think is the best combination to win this Test and the wicket will play a part in that,” Paine told a press conference on Wednesday.

“You don’t want to be changing too much. We want to try and settle guys who we think will play long term in their positions looking forward into the next series and then into the Ashes. We want to settle guys in their positions so as little a disruption as we can have to that or the better in that sense. But at the same time we’ve got to find the best XI to win this Test as well. It’s a bit of a balancing act.”

No team as yet from Tim Paine, they will decide before the toss. #AUSvIND pic.twitter.com/JpMO2GfcQu

A new year demands resolutions. But will they last the test of time? Cricket commentator Adam Collins looks at how the Australian squad in Sydney this week can start as they intend to go on.

For some, this New Year conversation with themselves will be about the darts or the booze or the punt. For Aaron Finch, it’s about the booming off drive in the first over of a match. It’s just that it feels so good. But it doesn’t need to define him – not in the white clothes. And he can still look cool without it. Promise.

The enduring challenge for new Test openers is getting out of the blocks. It’s an unforgiving gig. But not Marcus Harris. He had that bit under control from the get go. The hard part for him is making those starts count. As soon as he has faced 20 deliveries, convince the opposition to give him five minutes to meditate, bringing on a trance to get himself through the tricky period that keeps bringing his demise.

Play the reverse sweep more often. Bugger it. Whip it out at every opportunity. You know that nothing riles up the old codger brigade more than a stance being inverted, and a pair of wrists whipping the bat face backwards through the line of the ball. It’s not right, they say, it’s not dignified, it’s not natural. So play it to get off the mark. Play it in the shower. Play it walking down to the shops. And if you ever find yourself in possession of an actual broom, you know what to do. Backwards.

When the Sandpaper Trio were given their marching orders, the circumstances demanded that Shaun Marsh take a leadership role with the bat. He didn’t deliver. The West Australian needs to radiate belief and strength in a team with so little of it. Mantra in the mirror, visualisation in the morning, whatever it takes to present as a figure as collected and perfect as his best cover drive.

It turns out that throwing your hands at cross-bat shots works a lot worse in Test cricket than it does in the Big Bash. Travis Head is learning this the hard way, and slowly. He’s a state captain who has been given every opportunity to succeed. His resolve should simply be: Chill out. He’s going to be around for a long time. As Justin Langer keeps saying, in Test cricket you have much more time than you think.

Potential is a dirty word when you’ve racked up 31 Tests and you’re closer to being tagged a veteran than a youngster. The nicest man in cricket has been all but heckled out of the national side and has failed to prove them wrong. To win a spot in this team on merit, it’s time to go back to domestic cricket for the rest of this season and all of the next, work out his batting, and dominate at those levels in a way he never has before.

When Steve Smith was young, he knew his leggies were a point of difference that set him apart from other batsmen. He didn’t like bowling them, but they allowed him his first step into Test cricket. Later he became the best Test batsman in the world for a time. Marnus Labuschagne is different. He has got into the side based on some part-time wristies, but he need not give up the spin the way the former captain did. His bowling is good and getting better. Stick with it.

Keep smiling. It’s probably going to get worse before it gets better, but the captain has to find a way to maintain his honest and positive disposition. The world has made its mind up on Australian cricket for now, but the captain has the chance to rehabilitate that reputation faster than you might imagine.

Don’t change a thing. Pat Cummins is the great gift to Australian cricket, the complete package on the field and the perfect ambassador off it. You keep doing you.

Block Shane Warne on Twitter. And Instagram. And pop a cardboard box on his head if you happen to get in the same lift. The old boy loves firing shots when he thinks that Starc isn’t going so well, then claims credit for fixing the bowler whenever Starc next takes wickets. Tune him out completely, so that next time it comes up in a press conference you can smile sweetly and say you’d love to answer the question but you have no idea what anyone’s talking about.

Get the balance right. In 2017 Nathan Lyon tried to be a senior player by trash talking England. In 2018 he did it by bowling marathon spells and taking 49 Test wickets, even as the team fell to pieces around him. One method was infinitely more effective than the other, not to mention reflecting far better on the player. Lyon is a leader now, and has proved he’s much more effective with actions than with words.

In Josh Hazlewood’s first Ashes tour, he believed the hype about the green tracks of Old Blighty. By his own admission, he wanted to see how many unplayable deliveries he could send down at the English batsmen. He wasn’t the first seamer to fall for this trap, of course. With patience and control instead of youthful bravado, he could well take a Terry Alderman of wickets across the five Tests.