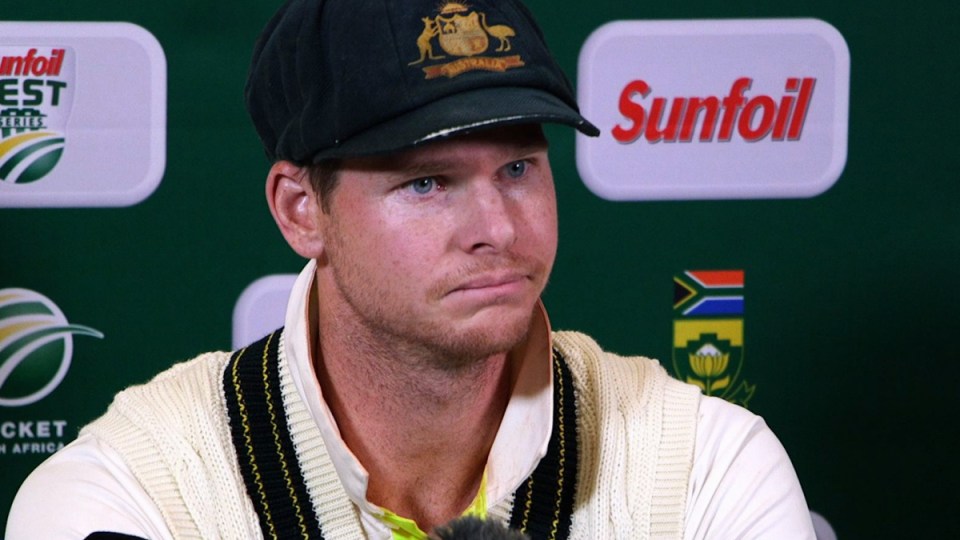 Australian cricket is in a dire state. With Cape Town’s sandpaper-gate crisis barely behind us, the road to recovery starts with the First Test in Adelaide on Thursday.

Steve Smith’s Men from Geoff Lemon is a brutally honest account of the cheating fiasco that blew Australian cricket apart.

The following extract recounts the disastrous press conference that left Smith and Cameron Bancroft stumbling over their words.

‘Things couldn’t have gone any worse’

Smith and Bancroft crossed the ground in dark that had nearly finished falling, the gallows walk towards the distant light.

Up the lift and down the breezeway, entering the press box still dressed in grass-stained whites, spikes clip-clopping on the floor. The players took seats at the front, negotiating the lux of the spotlights. Media manager Kate Hutchison stood to the side to direct traffic.

Right from the jump, everything about the presser was wrong. The players hadn’t even taken their baggy green caps off to avoid terrible optics in the news. Clearly, there was only one topic – we weren’t so much dealing with an elephant in the room as scrabbling for room inside an elephant – but Smith still had Hutchison throw to the floor for a question rather than tackling it head-on.

When Peter Lalor did the formalities, Smith handballed to Bancroft like a disappointed parent: ‘Do you want to explain?’

The team’s junior member, fronting an intimidating if attentive room, tried to formulate a line around his stammers. His cleaned-up quotes were widely circulated, but the raggedness of what he actually said is telling.

‘Yep, so, I’ve been, I’ve just had discussions with the match officials and, um, I have been charged with attempting to ah, um, ahhhgh. [Here he shakes his head and his voice drops almost into a growl.] To change the condition of the ball. Um, yeah look, we, we had a, um, yeah, a discussion during the break to, and um, yeah I, on my, on myself, I saw an opportunity to potentially use some, use some tape, get some, um, y’know, granules from the rough patches on the wicket, and try to, I guess, change the, yeah, change the ball condition.

‘Um, it didn’t work. The umpires obviously didn’t change the ball, but I guess once I was, y’know, sighted on the, on the screen, and having done that, I panicked quite a lot, and ah, that obviously resulted in me shoving it down my, um, my trousers.’

‘It was tape, was it?’ interjected Lalor.

‘Yeah. Yeah, so we have this, um, yellow tape in our kit and, um, it’s connected to actually some, some padding, but the actual sticky stuff itself is, it’s very sticky and I felt like it could be used to collect some stuff from the side of the pitch.’

Lalor switched to Smith to ask where the idea came from.

‘Yep, the leadership group knew about it. We spoke about it at lunch. I’m not proud of what’s happened.’

‘You know, it’s not within the spirit of the game. My integrity, the team’s integrity, the leadership group’s integrity has come into question, and rightfully so. It’s not on. [He also loses his thread, shaking his head.] It’s certainly not on and it won’t happen again. I can promise you that, under my leadership.’

The press conference should never have happened. Someone in team management should have been sharp enough to knock it on the head. Players faced the media while panicked enough to lie.

When Rob Forsaith pressed Smith for detail, the evasions began.

‘I’m not naming names, but the leadership group were what talked about it, and Bangers was around at the time.’

None of it washed. A dance of passive language followed. Tampering was a ‘mistake’ and a ‘poor action’. The pair were ‘not proud’ rather than ashamed. A plan to cheat was ‘a possible way to get an advantage’. Both mentioned that it hadn’t worked, indicating they’d rehearsed that line for mitigation.

Regret or embarrassment got 16 mentions next to one apology.

Remorse was less a feature than redemption; it was apparently time we moved on from something we’d only just discovered. There were three mentions of Smith’s leadership and three promises of no repeats. ‘I won’t be considering stepping down. I still think I’m the right person for the job,’ he offered with bewildering conviction. ‘It’s a big error in judgement but we’ll learn from it and move past it.’

In the effort not to implicate anyone, Smith implicated everyone.

The plan came from ‘purely the players’, he said in defending his coach.

Then: ‘I know the boys in the shed are embarrassed as well.’ And: ‘It’s a poor reflection on everyone in that dressing room.’ The ‘leadership group’ had six mentions and zero identified members. The last time such a group was mentioned had been a season earlier, when Glenn Maxwell was reprimanded by Smith, [David] Warner, [Josh] Hazlewood and [Mitchell] Starc. Take them for a start, but that was in the ODI team. In a fluctuating Test side, [Nathan] Lyon had the most matches, [Tim] Paine had started earliest, Shaun Marsh was the oldest, Mitch Marsh captained Western Australia, [Usman] Khawaja captained Queensland.

Really the only player exonerated was [Pat] Cummins.

Smith even mustered a bit of chippiness, like at questions over Starc’s reverse swing in Durban.

‘You can ask questions as much as you like, but I can promise you that this is the first time it’s happened. I think I’ve made it clear.’

How dare you reproach the word of the Australian captain.

‘Even if we weren’t caught, I’d still feel incredibly bad about it,’ he said when asked how much his remorse hinged on SuperSport’s camerawork. A few hours earlier he’d been on the same cameras lying to two Test umpires.

Having dragged in his teammates and admitted cheating, Smith seemed to think he could carry on without naming the culprits, without any detail on how it happened, and without sanction.

His commitment to never again doing what should never have been done was supposed to be inspiring enough. His only convincing statement came from a Freudian slip. ‘We’re very regrettable, in our actions,’ said Australia’s captain.

Nine reporters managed a question in eight-and-a-half minutes before Hutchison pulled her players from the room. It was the final blunder in a media disaster.

Players are treated as a resource so valuable that their time and energy must be strictly rationed. But this time, the players desperately needed the press.

My colleague Adam Collins channelled his previous career as a political adviser. ‘When you’re sprung, you’ve just got to eat the s–t sandwich,’ he said, shaking his head. ‘The bit that f–ks you is the cover-up. You run a till-they-drop press conference, you take your hit, you get everything out there, you get s–t all over you, and you say you’re sorry. It’s the only way to get through.’

Instead, there were thickets of questions unanswered and confusion unclarified.

An explanation that was half-arsed, half-hearted and ultimately half-witted would never pass autopsy.

As it would turn out, Smith and Bancroft were lying through their teeth.

The tampering idea had come from Warner, who they were trying to shelter with their vagueness. So had Bancroft’s recruitment, a question the batsman sidestepped. His tampering tool had been sandpaper, but tape and dirt sounded more impromptu. Especially among the Australian press, we took them at face value, as they took advantage of that to ameliorate the offence.

At that stage, crazy as it sounds, the players thought they could play down the story enough to soften the hit. Their level of concern was that Warner might miss one match on demerit points.

Their level of delusion was that they could cover for him. Their level of hubris made them think Smith’s captaincy would be secured with some solemn words. The Australian cricket team looked after its own.

This would end up more damaging than the original sin; there’s not much less dignified than trying to squirm out of trouble. Had the team refused comment until the ICC hearings were done it would have given them time to compose themselves. There would still have been a storm during the silence, but things couldn’t have gone any worse.

In the moment, most of Australia was asleep.

Our African evening was nine hours behind the east coast of home. The high-ups at Cricket Australia snoozed soundly. Media outlets had overnight subs throw up holding pieces on websites, while breakfast radio producers punched their alarm clocks and rubbed their eyes while printing off the wires.

Only the insomniacs and die-hards who had sat up all night with their pay TV or radio streams were buzzing with news they couldn’t share, isolated in their pockets of the night. We knew this was big, but not how big it would become. Night had fallen on Newlands, and even the mountain was gone.

This is an edited extract from Steve Smith’s Men by Geoff Lemon. It is published by Hardie Grant Books and available now