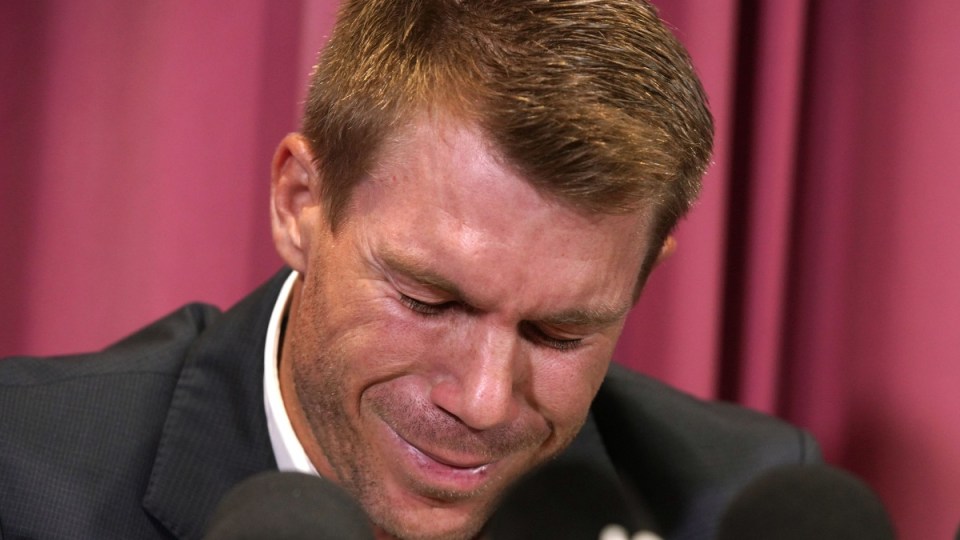 Former vice-captain of the Australian cricket team David Warner has been forced to defend himself after refusing to explain whether coach Darren Lehmann or others in the team knew about the ball tampering plot that has cost him his spot in the side.

Speaking from the Sydney Cricket Ground on Saturday morning, a teary Warner read from a prepared statement in which he repeatedly apologised to his wife, daughters, teammates, support staff, Cricket Australia and the Australian public.

He paused frequently to compose himself during the speech and promised to “do anything I can to earn that respect back from the Australian public”.

When asked by a journalist if he could put his “hand on his heart” and say that no other players or the coach were involved, besides embroiled cricket players Steve Smith and Cameron Bancroft, the former vice-captain dodged questions.

“I’m here today to accept my responsibility for my part, my involvement in what happened in Cape Town. It’s inexcusable and I’m deeply sorry,” Warner said.

The same journalist complained Warner “hadn’t answered the question of who else was involved” before he was shut down my a minder who said: “Sorry, excuse me, one question each”.

Warner also dodged questions about whether he was the “orchestrator in the scandal”, if the ball-tampering plot was “his idea” or if he had ball-tampered before.

“As I said, I’m here to take full responsibility for the part that I played in this,” he said.

After Warner’s minders called an end to the press conference, an unsatisfied reporter yelled, “Why won’t you answer questions?” as Warner left the room.

After receiving a barrage of criticism following the press conference, Warner took to social media to defend his position.

1/3 I know there are unanswered questions and lots of them. I completely understand. In time i will do my best to answer them all. But there is a formal CA process to follow.

2/3 I am taking advice to make sure I properly comply with that process and answer all questions in the proper place and at the proper time.

3/3 I should have mentioned that in my press conference I’m sorry for not making it clearer. With so much at stake for my family and cricket I have to follow this process properly. I think that’s fair.

The dumped vice-captain has previously been accused of hatching the ball-tampering plot.

Cricket Australia has accused Warner of masterminding the “plan to attempt to artificially alter the condition of the ball” and providing “instruction to a junior player (opening batsman Cameron Bancroft) to carry out the plan”.

CA also said Warner failed to report his knowledge of the plan after the match.

Warner was suspended from representative cricket for a year and banned from ever again holding a leadership position in the national team for his involvement the plot to illegally tamper with the ball during the third Test between Australia and South Africa in Cape Town.

The scandal has also seen the suspension of captain Steve Smith for 12 months. Bancroft has been banned for nine months after he was was caught on camera during the third Test using sandpaper to scuff the ball and provide the Australian bowlers with an unfair advantage.

Australian coach Darren Lehmann announced his resignation at the end of the Test match in Johannesburg, but he denied having prior knowledge of the plot.

Warner’s wife, Candice, who was seen crying watching her embattled husband front the press, hired famous PR professional Roxy Jacenko to help manage the fallout from scandal, but his apology attracted the ire of expert commentators and the public.

Pursuit Communications founder and public relations professional, Brooke Simmons told The New Daily that Warner’s insistence on repeating “key talking points” in his prepared statement made him appear “insincere” to the Australian public.

But she did have some sympathy for the difficult position he was placed in.

“Using the same key phrases over and over again is definitely a PR tactic and I think that has contributed to a response that has left people feeling it wasn’t as sincere as it could have been,” Ms Simmons said.

“But it’s an emotional situation for these players and it’s difficult to speak from the heart and be prepared for off the cuff questions.”

Ms Simmons said Warner also had little “wriggle room” as he was speaking after embroiled cricket players Steve Smith and Cameron Bancroft, adding that he was missing other elements.

“Smith had his father on hand, and there were candid interactions, but Warner didn’t have his two daughters by his side – this plays a huge factor.”

For the latest cricket results from South Africa please visit our homepage.