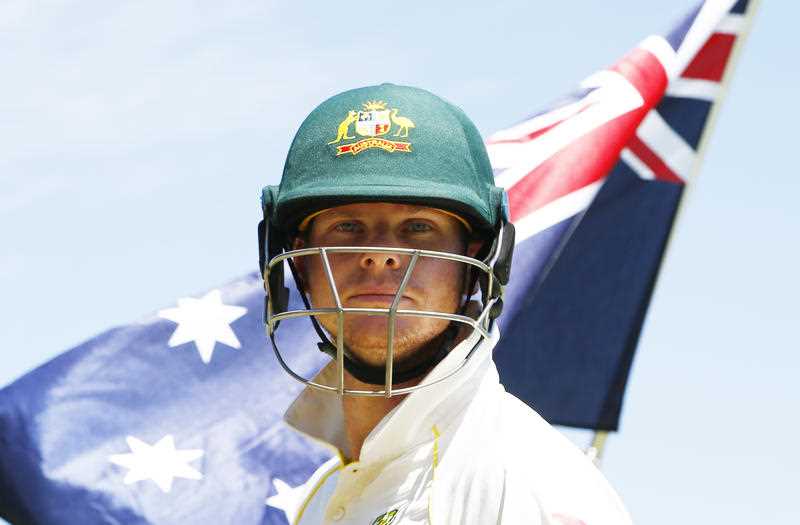 Steve Smith has been stood down from the captaincy and banned for a year. Photo: PA

Captain Steve Smith and vice-captain David Warner have been banned from playing for Australia for 12 months and stripped of their leadership positions, as Cricket Australia revealed that sandpaper, not sticky tape, was used to illegally scuff the ball during the third Test.

Cameron Bancroft was slapped with a nine-month suspension from international cricket for his role in the Cape Town ball-tampering incident, which has caused widespread condemnation around the globe.

However, cricket legend Shane Warne says the punishment given to Smith and Warner are too harsh and a result of Cricket Australia caving to public “hysteria”.

CA determined the trio were the only players aware of the premeditated plan.

In a bombshell statement on Wednesday night, CA also announced that:

Cricket Australia chief executive James Sutherland met with Smith, Warner and Bancroft behind closed doors at the team hotel in Johannesburg on Wednesday morning, where he revealed their penalties.

“The sanctions we have announced are significant for the individuals involved,” Sutherland said in a statement on Wednesday night.

“I am satisfied that the sanctions in this case properly reflect a balance between the need to protect the integrity and reputation of the game and the need to maintain the possibility of redemption for the individuals involved, all of whom have learned difficult lessons through these events.

CA chairman David Peever added: “The CA board understands and shares the anger of fans and the broader Australian community about these events.

“They go to the integrity and reputation of Australian cricket and Australian sport and the penalties must reflect that.

“These are significant penalties for professional players and the board does not impose them lightly. It is hoped that following a period of suspension, the players will be able to return to playing the game they love and eventually rebuild their careers.”

In another blow for Smith and Warner, both have also lost their Indian Premier League contracts for 2018.

IPL commissioner Rajiv Shukla said the pair would not be allowed to play after Cricket Australia’s ban.

Warner and Smith were each on a $A2.4 million contract to play in the competition, which begins next month.

Warner was captain of the Hyderabad Sunrisers while Smith was meant to skipper the Rajasthan Royals side.

Wicketkeeper Tim Paine will take over as Australia’s 46th Test captain, while Darren Lehmann – despite reports he was about to quit – will remain as coach and “was not in any way involved in the incident”, Sutherland said.

“I want to say that he [Lehmann] sent a message [on to the field] to say, ‘what in the hell is going on’. He didn’t say that, [he] used another word.”

Sutherland said he had not considered resigning as chief executive.

Sutherland addresses the media after handing out punishments:

Matthew Renshaw, Glenn Maxwell and Joe Burns are en route to South Africa as replacements for the banned trio for the fourth Test.

Lehmann later expressed his concern for the mental health of the three banned players, begging Australians to forgive the trio as they head home in disgrace.

“[I’m] disappointed, embarrassed, hurt for the game. I worry about the three guys immensely. We love all our players and they’re going through a really tough time,” he said.

“They have made a grave mistake but they are not bad people.

“These are young men and I hope people will give them a second chance.”

One of the key findings of the CA investigation was that sandpaper was used on the ball, which runs contrary to what Smith and Bancroft told reporters on Saturday.

Smith, the top-ranked Test batsman in the world, will be sidelined from Test series against Pakistan (away in the UAE) plus India and Sri Lanka (at home in 2018-19).

His next game for Australia will almost certainly be a warm-up game for next year’s World Cup in England, which is followed by an away Ashes campaign.

Earlier this week, the International Cricket Council announced it would ban Smith for one match and fine him all of his match fee.

Bancroft was fined 75 per cent of his match fee and received three demerit points.

Smith will fly back to Australia overnight and is set to front a press conference when he touches down in Sydney on Thursday.

“It’s going to be a bit of a public execution that one. I don’t know if Warner will be appearing somewhere, but the captain bears the responsibility,” ABC commentator Jim Maxwell said.

Warner, who has fallen out with teammates over the ball-tampering saga, may potentially have played his last game for Australia. It is unclear if the former vice-captain will be welcome back in the dressing room.

Smith broke the news to some teammates in the lobby shortly after meeting with Sutherland, many of whom struggled to hide how shattered they were.

Smith and Warner banned for 12 months as cricket fallout continues