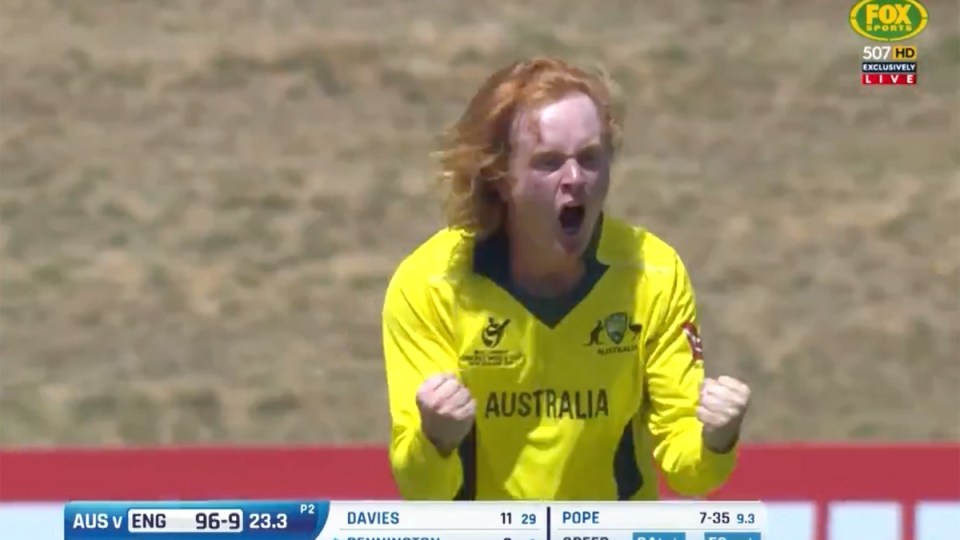 To be dubbed ‘the next Shane Warne’ is unfair on any cricketer.

The man affectionately known as ‘The King’ took an incredible 708 Test wickets and his confidence with the ball and off-field charisma made him a national darling.

Because of all that, Australia will probably never find another spinner, let alone a leg-spinner, as good as Warne, but there have certainly been similarities in Lloyd Pope, the 18-year-old who has been the headline attraction of this year’s Under-19 World Cup in New Zealand.

The flame-haired leggie from South Australia’s Adelaide Hills snared an incredible 8-35 in Australia’s quarter-final win over England last month, helping his country to victory from a seemingly helpless position.

Australia made just 127 and England, at 0-47 in the eighth over, were cruising, only for Pope to run riot in a compelling spell full of unplayable wrong’uns, swagger, big celebrations and amazing catches from his team-mates.

Like his idol Warne did many times, Pope single-handedly dragged Australia over the line, with England bowled out for 96.

Speaking ahead of Saturday’s tournament final against India, Pope was staying modest, telling The New Daily: “I just tried to bowl my best. Things paid off.”

Alas, his hopes were dashed when India cruised to an easy-eight wicket victory in the final.

Life has changed since then, he admitted.

“I feel like there’s a lot more people watching how I’m bowling. I’ve been in the public eye and I’ve never had that before, so it’s been a pretty interesting experience,” he said.

Warne himself was quick to congratulate Pope on Twitter.

Quoting an article on Pope’s England performance, he said: “This is terrific and brings a huge smile to my face.

“I had the pleasure of meeting this impressive young man in Adelaide a while ago! Was nice to have a bowl with him too – Lloyd give it a rip … spin to win my friend.”

Glenn Maxwell and Kerry O’Keeffe were also quick to praise Pope, but it was Warne’s words that meant the most to him.

“I just love the way he [Warne] thinks about the game,” he said.

“I remember watching a Big Bash game, where he was talking to commentators as he was bowling to Brendon McCullum.

“He set him up with a couple of balls and then predicted what would happen and bowled McCullum around his legs. That really hit me.

“He was one step ahead. It made me think that you can’t always bowl where you want it and you’ve got to bowl where the batsman doesn’t want it.”

Pope wants to do all he can to be successful, just like Warne, in red-ball cricket and his enthusiasm to play the longer-form of the game is something he expresses regularly during a 15-minute interview.

And if he appears unflustered and in control out in the middle, it’s because he is.

“I don’t really get nervous around cricket games. I’m pretty relaxed and don’t really stress too much,” he said.

Pope’s teammate Zak Evans said that the relaxed vibe rubs off on others in the dressing room.

“He is a funny one. Pretty loud but really funny,” he said.

For Pope, cricket is fun, and when he’s not playing, he loves working on his variations, so much so he claims to have “30 different stock balls”.

“I’ve got the main three, the leggie, the wrong’un and the slider and then a lot of subtle variations from there, be it foot position, how close I am to the stumps, different speeds,” he said.

More deliveries are in the pipeline, too, and if they are as successful as his wrong’un, which bamboozled England so much he took six wickets with it, batsmen across the country better look out.

Making the story of Pope, who has a rookie contract with South Australia and will start university this year, even more remarkable, is that he started out as a medium-pacer.

His decision to “bowl some Shane Warnes” to his father in the nets one day produced a couple of good deliveries, though, and even though he wasn’t that keen on it, Pope was coaxed into bowling it in his next match.

The result was a haul of 6-4 in an Under-12 match in Cairns – he lived there for four years – and the rest is history.

In three underage tournaments over the last two years, Pope snagged 54 wickets at an average of 16.1, while 15 wickets in five matches for Australia’s Under-19 team, against Sri Lanka in April last year, gave an indication of what was to come.

Pope, who works on his bowling with former South Australian pair Aaron O’Brien and John Davison and ex-Australia tweaker Dan Cullen, is now hoping that change will pay dividends and help him do something he has always wanted to do: win a World Cup final for his country.

“We’ve learned a lot over the tournament and we are really strong now,” he said.

“All the boys are confident. We back our ability and we’re excited.”

Players like Pope and Evans feel blessed to have had ex-Australia heroes Ryan Harris and Chris Rogers coach them through the Under-19 World Cup.

For Evans, the 17-year-old opening bowler who has already been clocked bowling over 140 km/h, the chance to work with Harris every day has been invaluable.

“He is one of the best bowlers to come through the system in Australia,” Evans told The New Daily.

“He gives me a lot of tips and pointers and we’ve been really working on my control.

“I’m looking to bowl a bit more like Ryan did and focus on being more economical.”

If Evans, one of the youngest members of the squad, was back in Australia, he would have started Year 12 at Xavier College this week.

“I’d definitely rather be here,” he said, adding that it was “an honour to be in this team” and that the Aussies had “taken a lot” from a group stage loss to India.

The England victory, inspired by Pope, was the moment everything changed, according to Evans.

“That was just an awesome win,” he said.

“It was obviously a special effort from ‘Popey’ and it just proves we have the potential to win from anywhere.”

Evans, who has been compared to James Pattinson for his pace and ability to swing the ball, is also a talented footballer.

He, like vice-captain Will Sutherland, will have a decision to make at the end of the year between AFL and cricket.

Sutherland chose cricket, despite being touted as a possible No.1 draft pick, and a similar decision seems likely from Evans, given his obvious passion for the sport.

“I’ve just really enjoyed these last few weeks, getting to bowl in different conditions,” he said.

“I’m stoked to be in the final. It’s an awesome feeling.”

Evans is coming into Saturday’s final in form, having taken 2-26 in Australia’s quarter-final win over Afghanistan.

Unlike Pope, Evans said he will be nervous before Saturday’s final, but that it’s a good thing.

“I’m just going to run in, try and control the nerves and keep it simple.

“I’ve got to hit the wicket hard and hopefully I’ll get a few wickets.”