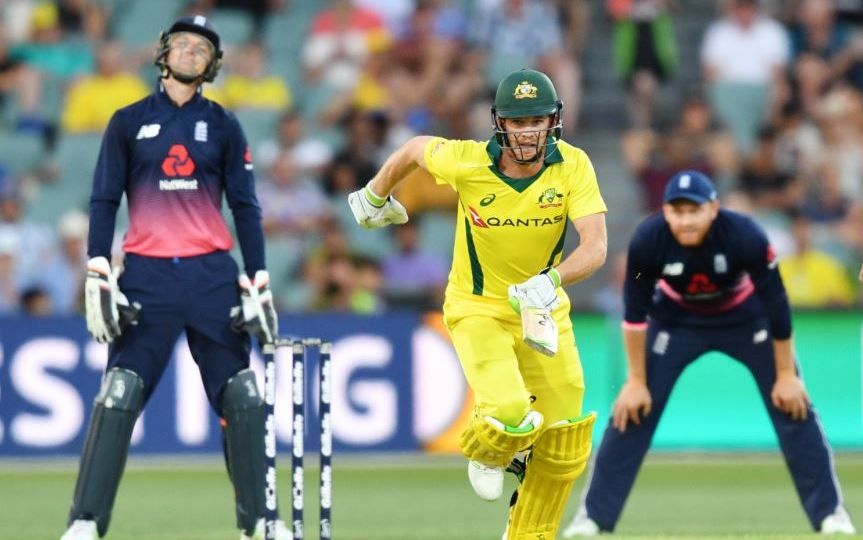 Tim Paine thunders down the pitch on his way to securing Australia's first win in the one-day series. AAP/David Mariuz

Recalled opener Travis Head fell just shy of a century as Australia averted an ODI whitewash to down England by three wickets at Adelaide Oval.

It was a result often in doubt despite an avalanche of English wickets that saw the visitors at one point early in their innings at a woeful 5-8.

It should have been an easy victory after Australia’s pace attack tore the English openers to pieces, but the result was up in the air until a series of boundaries from Tim Paine sealed the deal.

Every time Australia appeared poised to play out the game on its terms another wicket fell and England’s hopes of an Australian collapse to match the fall of their own early wickets would soar.

Chasing England’s meagre 196 seemed entirely doable after an English innings that saw the visitors reeling 5-8 in the sixth over of their knock.

Head was the hero of the day, making 96 and lifting Australia to victory with 13 overs to spare in the fourth ODI of the series.

The result leaves the series 3-1 in England’s favour ahead of the last match on Sunday in Perth and denies the tourists their first clean sweep of an ODI series in Australia.

Cummins claimed career-best ODI figures of 4-24 and Hazlewood (3-39) took his wickets in his initial four overs, as England lost its first five wickets for just eight runs after 6.2 overs.

Australia’s previous best ODI bowling start was 5-17 against minnows Kenya in 2002 and Zimbabwe in 2004.

At 5-8, England had recorded the third-worst ODI batting start, bettering only Sri Lanka’s 5-6 against Bangladesh in 2009 and Canada’s 5-7 against the Netherlands in 2013.

Four of England’s top-six batsmen made ducks and the tourists did not hit a boundary until the 15th over.

But English all-rounder Chris Woakes ensured some respectability, smacking five sixes and top-scoring with 78 from 82 balls, though the visitors were all out in 44.5 overs.

Head, recalled to the side to open the batting because of Aaron Finch’s hamstring injury, steered the run chase with aplomb.

Despite the early losses of David Warner (13), Cameron White (3) and captain Steve Smith (4), Head peeled off a half-century from 55 balls.

In the process, Head passed 1,000 ODI runs in his 30th innings, a faster rate than luminaries including Ricky Ponting, Warner and Dean Jones.

The left-hander, who scored his sole ODI ton on Australia Day last year, was on the cusp of another century when his 107-ball knock ended with the home side 17 runs short of victory.

Head received scant support – Mitchell Marsh’s 32 from 30 deliveries was the next-best score and Tim Paine made a valuable 25 not out.