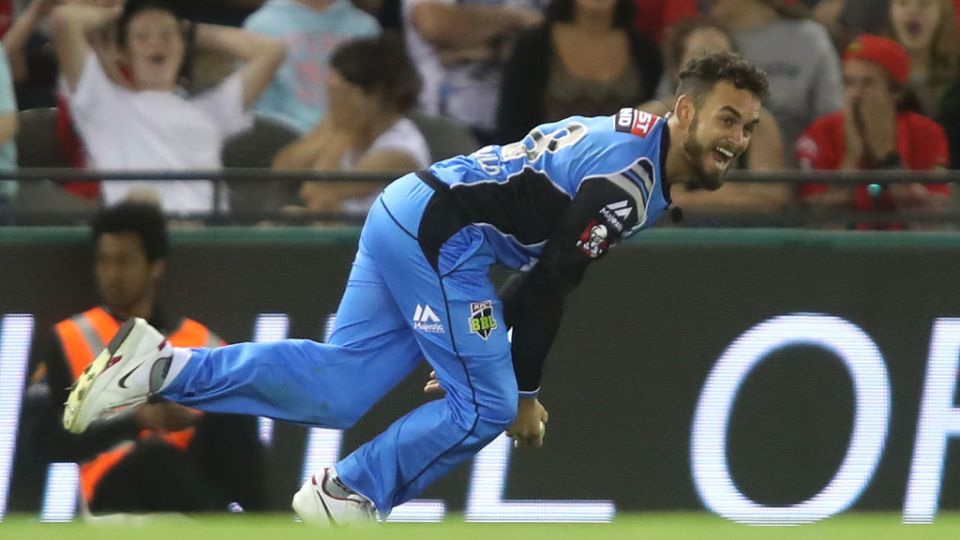 Jake Weatherald takes a catch thrown to him by Ben Laughlin in one of the best bits of fielding ever seen. Photo: Getty

One of the most remarkable catches in cricket history was the highlight of an emphatic 26-run BBL win by the Adelaide Strikers over the Melbourne Renegades.

The scorecard will show Dwayne Bravo was caught by Jake Weatherald off the bowling of Rashid Khan but that doesn’t come close to capturing the moment.

Bravo’s lofted off-drive was heading over the boundary rope when it was brilliantly caught by a sprinting Ben Laughlin.

The Strikers’ seamer then had the presence of mind to flick the ball 30m back into play as he fell over the boundary rope.

To the amazement of the 23,089 fans at Etihad Stadium, the ball hung in the air long enough for Weatherald to run around and take a superb diving catch.

Watch the moment below:

Bravo departed for four runs with the the score 5-100 and the Renegades’ hopes of an unlikely win went with him.

Earlier, half-centuries to Travis Head and Colin Ingram propelled the Strikers to 5-173 after they were sent in on Monday night.

The Strikers made a watchful start, recording their second-lowest power play total of the tournament, but accelerated late in their innings thanks to some lusty hitting from Head and Ingram.

The pair combined for a pivotal 88-run partnership before Head departed, bowled by former Striker Kieron Pollard, with his 58 from 47 deliveries including four fours and two sixes.

Ingram’s innings of 68 from 36 balls was the standout performance with the bat, the South African belting five sixes and four fours.

After containing the Strikers early on, the Renegades’ bowling attack was picked apart late.

Bravo finished with figures of 2-30 from his four overs, taking the wickets of Ingram and Jake Lehmann with the last two deliveries of the innings.

The result saw the Strikers secure a home semi-final and loosened the Renegades’ grip on fourth spot.

Melbourne’s red team is equal on points with the fifth-placed Sydney Thunder and the Brisbane Heat in sixth, but has a game in hand on both.

The Renegades face a quick turnaround with their next match against the Sydney Thunder in Canberra on Wednesday night, while the Strikers travel to Perth to take on the Scorchers on Thursday.