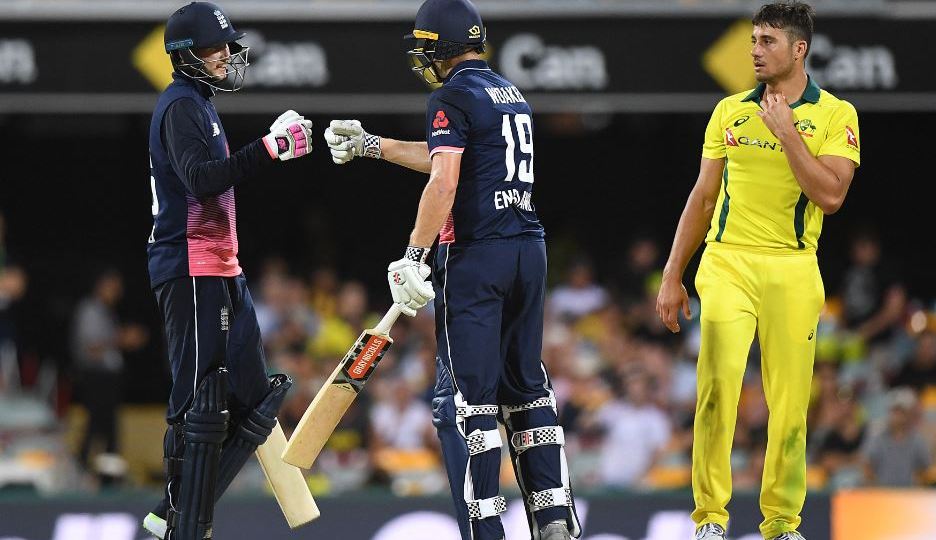 A reshuffled Australia has again proved no match for England’s high-flying limited overs, going down to a comprehensive loss at the Gabba.

In a repeat of Sunday’s series opener, an Aaron Finch hundred set Australian on track for a huge total only for the hosts to limp home and become easy prey for the English.

Finch made 106 on Friday to go with his 107 in Melbourne, but Australia’s 9-270 never looked enough in good batting conditions as England reached the target with four wickets and 34 balls to spare.

England go 2-0 up in the five-game series against the reigning world champions ahead of Sunday’s third game at the SCG.

Australia have now lost lost 15 of their past 22 completed ODIs and won just one of their past 10 in what is their worst 10-game sequence.

Australia made three changes to the side, with debutantes Alex Carey and Jhye Richardson in for the ill Tim Paine and Josh Hazlewood.

But it was the decision to opt for an extra batsman in Cameron White at legspinner Adam Zampa’s expense that raised eyebrows, particularly given the returns of England’s spin trio on a bouncy Gabba deck.

Adil Rashid (2-71) was again expensive but damaging, while Moeen Ali (1-31 from seven) put the stops on Australia’s bright start and Joe Root (2-31 from seven) claimed the key wickets of Steve Smith and Travis Head.

Kevin Pietersen, Shane Warne and Michael Clarke were among those critical of the decision to drop the leggie as part-timers Aaron Finch and Head proved easy pickings in the chase.

“That obviously didn’t work as well as we would have liked tonight… still trying to find the right balance,” Australian captain Steve Smith said.

Alex Hales (57) and Jonny Bairstow (60) got England off to another flyer before Richardson (2-57) claimed both their scalps.

When a textbook Starc yorker went through Ali (1), it left England six down chasing a further 44 from 74 balls.

“There were a few hairy moments, but we kept our composure,” man-of-the-match Root said.

“It wasn’t very pretty, not a lot of finesse or easy on the eye – it was about being there at the end and winning the game.”

As on Sunday, Finch and Mitchell Marsh (36) piloted Australia to a point where they were ready to launch, before both fell in quick succession as they looked to up the tempo.

It left Australia’s lower order with plenty to do from a standing start, with a meek 6-62 from the final 11 overs the end result.

“It was frustrating; I think we got ourselves into a reasonable position … with 11 overs to go and everything fell to pieces again,” Smith said.