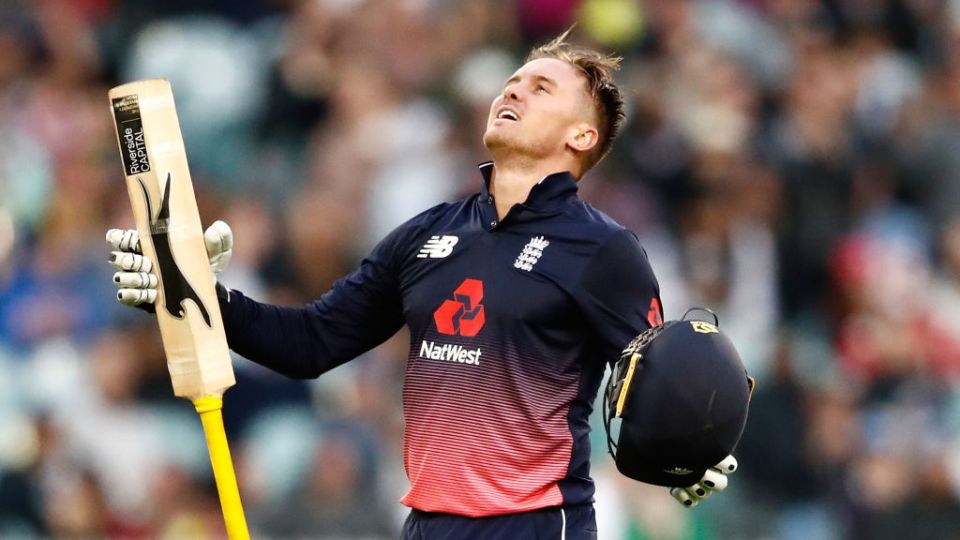 Jason Roy has form in putting Australia to the swiord in the one-day arena. Photo: Getty Photo: Getty

Jason Roy has smashed a record-breaking 180 to guide England to a five-wicket victory over Australia in Sunday’s one-day international series-opener at the MCG.

Set an imposing 305 to win, the visitors chased down their target with seven balls to spare after Roy blazed his way to the highest ODI score by an England batsman.

It is the highest ODI run chase ever at the MCG, exceeding the 296 made by Australia against India in 2016.

White-ball specialist Roy belted five sixes and 16 fours on his way to overtaking the record 171 scored by teammate Alex Hales against Pakistan at Trent Bridge in 2016.

He and Test skipper Joe Root (91 not out) combined for a brilliant 221-run third-wicket partnership to restore some English pride after their 4-0 Ashes series defeat.

Roy made an astonishing start to his innings, going on the offensive against frontline quicks Mitchell Starc and Pat Cummins to bring up his fifty off just 32 balls.

Starc had Jonny Bairstow (14) caught behind in the fifth over and Alex Hales (4) fell to Cummins soon after but by then, England had already piled on 60 runs at 10 an over.

After plundering 13 fours and two sixes from the first 10 overs, England went the next 10 without scoring a single boundary.

But Roy and Root remained in total control of the game, forcing Steve Smith to rotate between bowlers in search of a breakthrough.

Roy was given out lbw to Adam Zampa on 91 but immediately called for a review, and the decision was overturned after replays showed it was pitching outside the line.

Starc eventually had Roy caught in the deep but at 3-281, the damage was well and truly done.

Aaron Finch earlier scored his ninth one-day international century, combining with Mitch Marsh (50) for a 118-run partnership as the hosts reached 8-304 from their 50 overs.

Marcus Stoinis did the damage late, smacking 60 off 40 balls in his first outing for Australia on home soil.

Smith had identified the middle order as a key area of improvement and the runs from Stoinis and Marsh proved vital after Smith and David Warner both fell cheaply.

But the result will be another reminder for Smith’s men that while they have made gains in the Test arena, they remain a long way off the ODI side that won the World Cup in 2015.