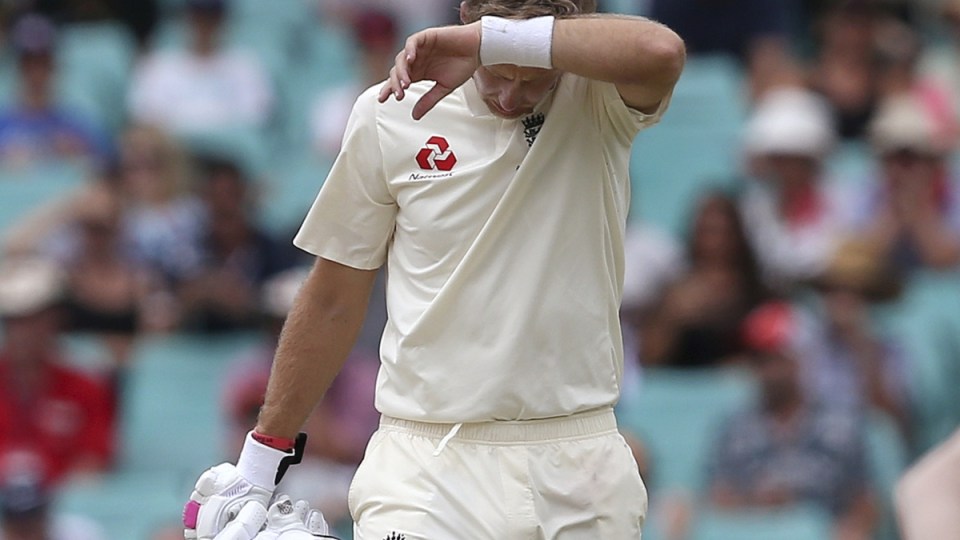 England's Joe Root wipes his face in break during the last day of their Ashes cricket test match in Sydney. Photo: AP

England captain Joe Root’s illness after playing through scorching heat during the fifth Ashes Test at the SCG has prompted calls for new ‘cease play’ rules to improve player safety.

Although England denies a bout of gastroenteritis was directly related to dehydration, Dr Brad Frankum, president of the Australian Medical Association in New South Wales, said play should not have gone ahead in such conditions.

“It borders on being unsafe,” Dr Frankum told The New Daily.

“If the umpires feel it’s unsafe or the players are too distressed, they probably should have a rule of being able to cease play.”

With temperatures reaching 47 degrees in Penrith and other parts of Sydney throughout Sunday, a gallant Root was out in the middle for all bar 35 balls on day four of the final Ashes Test of the summer.

Root was hospitalised overnight with vomiting and diarrhoea, and was asleep in the SCG dressing rooms as Steve Smith lifted the trophy for Australia, which won the series 4-0.

The 27-year-old made a late arrival to the ground on Monday, failing to resume at the start of play, with his hospital wristband still strapped to his left wrist.

After Moeen Ali was dismissed in the first session, Root continued his innings, making a gutsy 58 with the bat, before retiring ill at the lunch break as Australia’s quicks ran through England’s tail to secure a innings-and-123-run victory.

Dr Frankum said participants of all sports need to be protected.

“These are very fit, professional athletes so of all people they are probably best equipped to play sport in that kind of heat, but I think it just shows it’s really on the edge of safety,” he said.

But Dr Frankum believes calling off play should be decided by several different factors.

“I think it’s a bit of a combination – temperature, humidity and the players being acclimatised,” he said.

“So I think a blanket temperature rule is probably not going to work, it’s a combination of factors which need to be taken into account.”

In equivalent conditions at the Sydney International tennis tournament, play was abandoned when the temperature exceeded 40C, while the cricketers played through the hottest ever conditions for an Ashes Test.

Andy Bichel, who donned the baggy green in 19 Tests for Australia, knows just what it is like to play in dangerous weather.

Trapped under the burning sun in Sharjah in 2002, Bichel braved 52-degree heat to represent his country, but admits it was nearly impossible to compete at a professional level.

“It was extremely hot … and just so sweaty,” Bichel told The New Daily.

“I ran in to field the ball and I missed the ball, then they took me off. They put me in pretty much an ice coffin to try to bring my body temperature back down.”

“You’re so dejected and withdrawn … you feel you’ve got no energy,” he said.

“For me it had reoccurring effects, and it went on for a little while.”

Dean Jones was another cricketer to famously battle the heat for Australia, scoring 210 runs in agonising Indian conditions in 1986.

After speaking to a couple of doctors this morning.. in my opinion cricket should be called off after 41C.. it’s a workplace issue now.. just my opinion ..