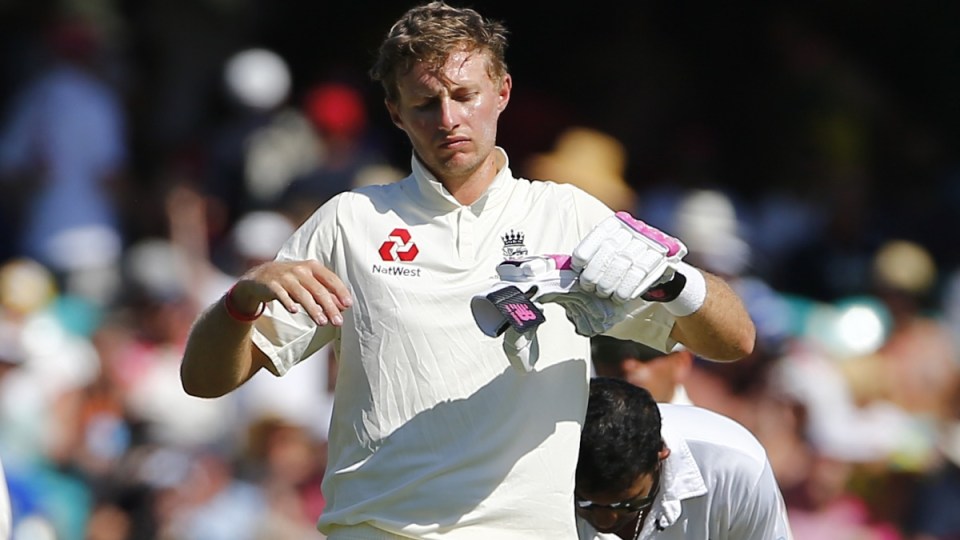 Joe Root has paid the price after spending most Sunday's heatwave in the middle. Photo: AAP

England captain Joe Root is struggling through dehydration at the crease, as the tourists attempt to save the fifth Ashes Test at the SCG.

Root, who was hospitalised with severe dehydration, resumed his innings after a short stint on the sidelines as he retired hurt.

Root finished with an unbeaten 42 at stumps on day four of the series finale, having spent most of Sunday in the field being baked in record-breaking heat.

England resumed at 4-93 on day five, trailing Australia by 210 runs.

An England team spokesman confirmed Root’s hospitalisation, noting he was severely dehydrated with diarrhoea and vomiting.

Root stood as one of the visitors’ last real pillars of resistance heading into the final morning of the series, set to return to the crease on 42 with the English still trailing by 210 runs with six wickets in hand.

The England Cricket Board confirmed their captain’s hospitalisation on Monday morning, after the hottest day of Ashes cricket in Australia on record.

“Joe Root is currently in hospital with severe dehydration,” an England team spokesman said less than 90 minutes before the scheduled start of play.

“Severely dehydrated with diarrhoea and vomiting.

“I will give a further update later on whether he will be fit to resume his innings this morning.”

Root spent the most time in the middle of all players in Sydney’s Sunday heatwave, fielding for the first half of the day before being called to the crease just six overs into England’s innings.

Temperatures at nearby Bureau of Meteorology stations reached 43.4 and 43.7 degrees, above the record 43.1 taken during the 1908 Adelaide Ashes Test.

Root batted for 175 minutes on day four in an effort to save the fifth Test, with England starting its second innings 303 runs in arrears with no hope of victory.

A heat stress tracker, which takes into account environmental factors for a ‘feels like’ mark, at the ground also displayed a reading of 57.6C in the middle.

Any absence of Root would expose England’s lower order and tail, with the out-of-form Moeen Ali due in next before the bowlers.

The dehydration will also add further insult to a right index finger injury sustained by Root on Sunday night, after he attempted to pull a Mitchell Starc ball in the final session.

At the time he brushed it off as minor, and England coaching staff were confident he would be able to bat through it on Monday morning.

“Before I came out I said ‘How is it’? And he said ‘sore’ and he said ‘It’ll probably be a bit stiff in the morning’.

“I think regardless of how it is in the morning, he’ll be taking guard first ball, that’s for certain.”