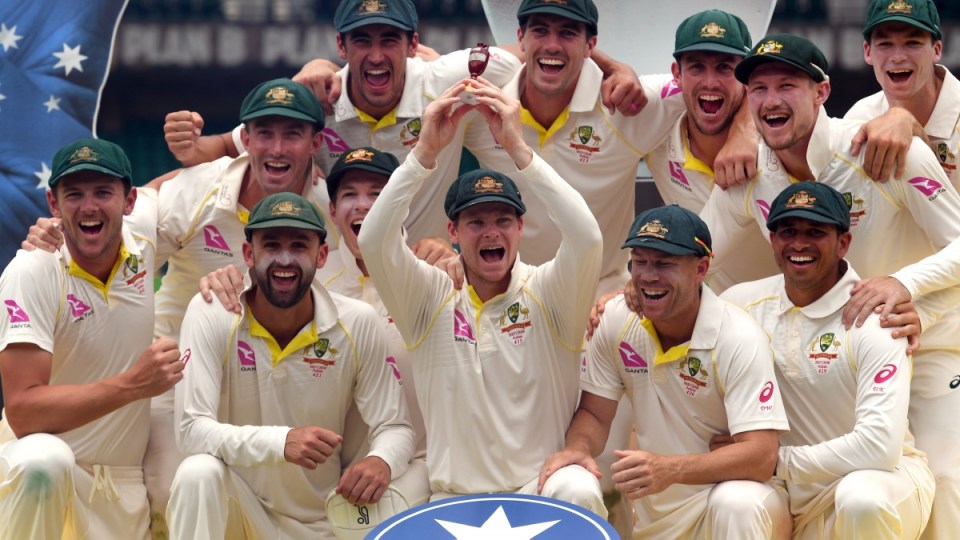 Australia has completed victory over England by an innings and 123 runs in Sydney, sealing a 4-0 Ashes series win in dominant fashion.

England’s resistance lasted little more than a session, as Australia came flying out of the gates after the lunch break to take the remaining wickets and kick off the celebrations.

Fans were allowed onto the field to see Australia lift the glass Ashes trophy, while Pat Cummins was named man of the match and Steve Smith the man of the series.

Captain Joe Root was left battling a stomach bug and exhaustion through day five, and was forced to stay behind in the dressing room at the start of play and the resumption after lunch as his symptoms got the better of him.

He fought bravely while at the crease, bringing up another half-century, but his admirable efforts were in vain as Australia soared to another win.

Pat Cummins took two wickets in an over almost immediately after lunch to set the collapse off, finishing with figures of 4-39, while Nathan Lyon completed his dominant series over English counterpart Moeen Ali, trapping him LBW yet again in the morning session.

From there, England offered little resistance.

All eyes were on the England balcony to see whether Root would be able to return, but his illness eventually conquered him, leaving Australia with only nine wickets to take in the innings to complete the win.

The morning session was a slow slog for both teams, who may have been coming to terms with the series’ imminent end.

Australia could only snag the wicket of Ali as Root and Jonny Bairstow dug in.

But Bairstow did not last long after lunch, trapped in front to a Cummins delivery that would have knocked the leg stump out of the ground.

Three balls later, Stuart Broad’s series ended too. The much-discussed short-ball tactics worked a treat as a rising bouncer caught Broad’s glove and ballooned to Paine behind the stumps.

Mason Crane suffered a similar fate, his thumb getting between a Cummins delivery and Paine’s gloves — for some reason, known only to him, he chose to review. It didn’t change anything.

At the end of it all, the final wicket was greeted by anti-climax as Jimmy Anderson internally debated whether he had edged Josh Hazlewood to Paine, only to signal the end of the series by opting against a review and shaking hands.

It wasn’t a flashy conclusion, but it was a deserved victory for Australia.