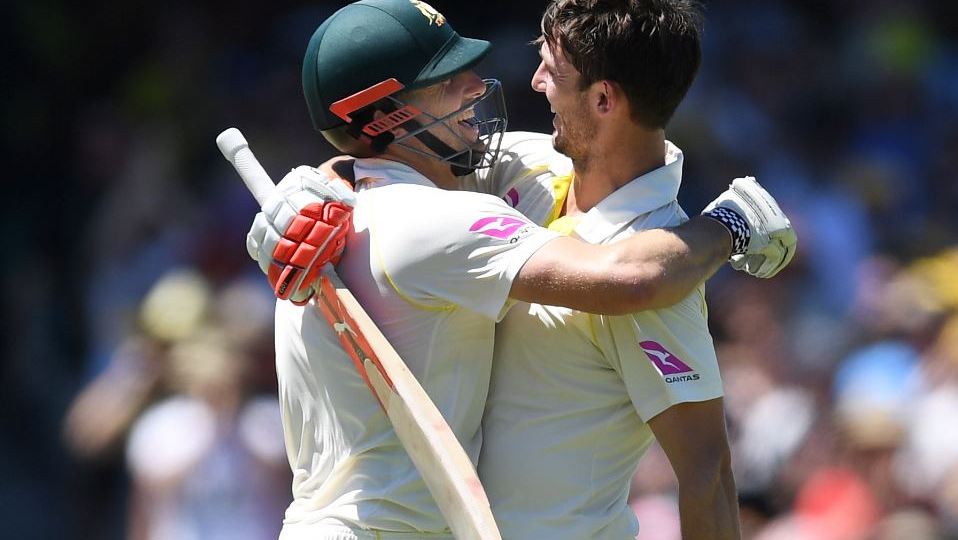 England wilted in Sydney’s record-breaking heat as Australia moved within sight of a 4-0 Ashes series win on day four of the fifth Test.

The tourists reached 4-93 at stumps on Sunday, requiring a further 210 runs to make Australia bat again.

Joe Root’s side baked in the field, fetching balls from everywhere as Shaun Marsh (156) and Mitch Marsh (101) shared a 169-run stand and two emotional hugs after each brother reached three figures.

Heat monitors at the SCG reported a ‘feels like’ temperature of 57.6C. Bureau of Meteorology records suggest there hasn’t been such a hot day of Ashes cricket in Australia since a 43.1C heatwave struck Adelaide some 110 years ago.

Mitch reached his second Test ton by driving Tom Curran off the back foot through the covers, before turning back to hug his older brother mid-pitch who had come back for a second run.

Both batsmen had to scramble to the safety of the crease when they realised the ball was still in play, narrowly avoiding a run-out.

Captain Steve Smith’s open-jawed reaction to the near-debacle at centre pitch was priceless, as captured on video.

Curran had his revenge seconds later with a ball that appeared to bounce off a dead spot on the pitch, stayed low and veered to clip Mitchell Marsh’s off stump with Australia 5-544.

Smith called his teammates in at 7-649, claiming a first-innings lead of 303 runs.

England’s openers departed in 5.5 overs as their side slipped to 2-15, Alistair Cook dispatched by Nathan Lyon for 10 and Mark Stoneham gone for a duck.

Root was struck on the finger by Mitchell Starc, but fought on bravely to remain unbeaten on 42 at stumps, alongside Jonny Bairstow.

For the Marsh brothers, the twin-century triumph completed the ultimate boyhood dream – and during that crazed moment of centre-pitch jubilation it appeared the pair were still living by backyard cricket rules.

When their imminent peril dawned, the brothers split to scramble to safety, avoiding what would have been one of the most quirky and calamitous run outs in the history of Test cricket.

It marked the first time since Mark and Steve Waugh’s centuries against England at The Oval in 2001 that Australian brothers have reached three figures in the same innings.

Close off the field, the brothers provided the perfect balance for each other in their maiden century stand of 169.

“We don’t have too much banter,” Mitch told ABC on Sunday.

“Shaun is pretty serious out on the field and I’m not. I just try and keep him as relaxed as possible.”

Shaun Marsh’s sixth career Test century capped a remarkable summer for the West Australian, who has become Australia’s most consistent batsman after the peerless Smith.

The Ashes: Two tons of brotherly love for Shaun and Mitchell Marsh