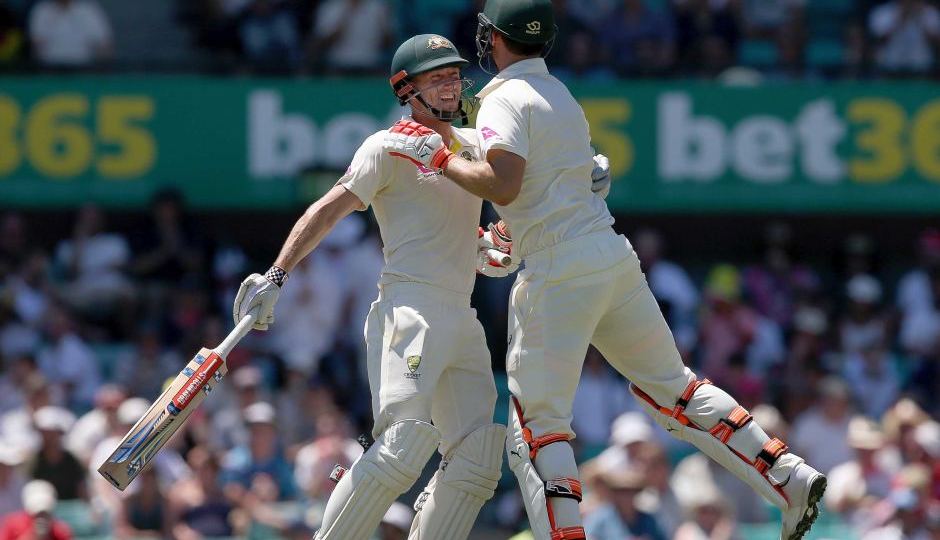 Shaun Marsh still cannot find a reason behind his mid-pitch brain fade that nearly saw him run out after his brother Mitch reached a second Test century.

The Marsh brothers became the first brotherly pairing to score centuries in the same partnership at the SCG on day four of the fifth Ashes Test, while also becoming only the fifth brothers to achieve the feat in the same innings in Test cricket history.

But their place in history almost ended in hilarious calamity as the pair sought to embrace each other in the middle of completing a second run, before Shaun was ordered by his younger brother to quickly complete the hurried run.

After Mitch punched Tom Curran through the covers to bring up his hundred, the pair collided mid-pitch as they celebrated the milestone while the ball was still being returned.

“Then we had a split second of panic.”

It was only then the pair split to rush to complete the second, avoiding what would’ve been one of the most disastrous run-outs in history.

“I’m not too sure, I think the emotion got the better of me and I just wanted to give him a hug and forgot the ball was still in play,” Shaun told ABC Grandstand.

“I don’t know what happened. As I say, I just saw him starting to celebrate and I just wanted to give him a hug. Luckily enough it all worked out well.

“It was great to be with him when he got that hundred, and lucky we didn’t get run out.”

Another celebration for the Marsh brothers, but Mitch had to remind Shaun to get back in his crease 😂😂 #MagellanMilestones pic.twitter.com/kEBdGpGGH8

Mitch was bowled the next ball for 101 to one that stayed low from Curran, but his second ton in three Tests was well worth the dramatic celebration as Australia finished the day six wickets from a 4-0 series scoreline.

Australian captain Steve Smith caught the cameras while the rest of the team celebrated Mitchell Marsh’s ton, with the skipper a picture of exasperation as a comical run-out almost ensued.

“Smith was pretty funny in the change rooms at lunch time. I guess it was one of them things, luckily it all worked out well. His reaction was pretty funny,” Shaun said.

“To be out there with Mitch, to both get Test centuries for Australia was an amazing feeling. It’s been a fantastic day. Hopefully we come tomorrow we get the six wickets and we have another Test win.”

Along with their first century stand, the brothers became just the third siblings to score hundreds in the same Ashes Test along with Ian and Greg Chappell and Mark and Steve Waugh.

None of those though had been achieved while both were at the crease at the same time.

The Ashes series has seen a complete turnaround in Shaun Marsh’s Test fortunes, having come from the outer once again to score two centuries against England and cement himself at No.5 for his country.

He credits a short spell in England, which got his mind focussed prior to the Sheffield Shield season, for his steely return to the Test fold.

“I sort of just went away and tried to just enjoy my cricket. I went to England, I really enjoyed it over there and I came back and didn’t put too many expectations on myself,” he said.

The roar, the hug, and then the mad panic to get back behind the crease. Mitchell Marsh's moment of scoring a Test ton alongside his brother.

Left off Cricket Australia’s contract list last year, he wasn’t picked for the Bangladesh tour and his Test career looked over before being granted a ninth life in the Ashes.

However, he has rewarded selectors with a stunning series that has included fighting 50s in Brisbane and Melbourne to go along with his centuries at the WACA and SCG.

“I didn’t know what the future held at this level,” Shaun said.

“I just went away and wanted to enjoy myself and obviously when I did get picked again it was quite emotional.”