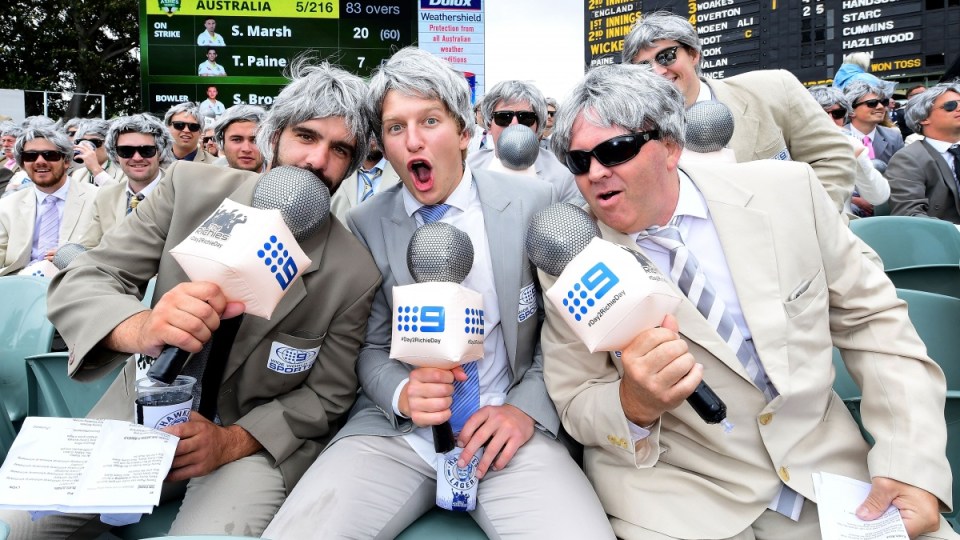 A few of The Richies on day two of the Second Test of the 2017/18 Ashes series. Photo: Getty

As a host of beige jackets and silver wigs pours down the aisles, all eyes shift from the cricket on centre stage, to the phenomenon taking over the stands.

Surrounded by a bay full of boisterous supporters on day two of an Ashes test, the atmosphere is something to behold. With tunes blaring from the trumpet and Channel Nine microphones held aloft, hundreds of fans belt out customised songs, with the spirit of Australian cricket alive and well.

As the beers settle in their bellies throughout the afternoon, the iconic group continue their quirky antics – chanting, singing and dancing as one.

So, who are these ‘80s styled fans flooding the bays and rocking each stadium they encounter?

Unfortunately, there will never be another Richie Benaud, but thanks to a couple of creative Aussies, his legacy will live on forever.

The former Australian captain and commentary genius became a beloved national figure, crafting a sound which signified the summer of cricket.

So, when his contract was on the line in 2009, 10 everyday mates from Sydney decided to take a stand for the national treasure.

“We saw a newspaper report that Richie Benaud hadn’t re-signed with the Channel Nine commentary team yet and we thought ‘Oh no, that’d be terrible’,” co-founder Lachlan Hennessy told The New Daily.

“We thought we better show him how much we love him, and decided we’d all dress up and go to the cricket.”

But an initial show of support quickly became one of Australian cricket’s greatest traditions.

“We didn’t really start it with any intention of an ongoing thing … but we had such a fun day that time in January 2010, and a few friends saw us and said ‘can we join you next year?’,” Hennessy said.

“For the first half a dozen years it was just mates, and mates-of-mates that joined, and it sort of doubled and doubled every year.

“But it got to a point where people asked us to go to Melbourne or Brisbane and do a Richie day.”

After being sought out in high demand, the original 10 Richies decided to expand, travelling to all six tests for the first time throughout the 2016/17 summer.

Now people have come from all directions to get involved with the latest cricketing sensation.

“I think we’ve [had] about 1600 [people participate] this summer which is great,” Hennessy said.

When The Richies returned to the SCG for an eighth time on day two of the fifth Ashes test, a record number of supporters packed the stands.

“We filled the whole bay in Sydney, which is about 650 people, so we’re pretty stoked because that was a goal a few years ago,” he said.

Benaud made the number ‘two’ famous with his unique pronunciation, and there is no day more fitting for The Richies to strut their stuff.

But there were many reasons why Hennessy and his mates decided this was the most appropriate day for celebration.

“For us, day two is the best day of test cricket because you normally see both teams bat and bowl,” he said.

“Richie Benaud was an all-rounder, and especially in his commentating he was really good at supporting good cricket from whoever was playing.

“That’s why we chose day two originally, but it does fit in nicely to that ‘two’ saying.”

The Richies’ achievements and growth as a group have not only been spectacular, but unforeseeable from the beginning.

“We’re really proud, and we’ve had a lot of fun,” Hennessy said.

“We got to speak to Richie Benaud a few times over the years, and met a few of the cricket players and commentators.

“We’ve had the opportunity to do some really fun stuff … and just generally making the most of the cricket.”

While for 90 overs throughout the day The Richies have a blast, the lead-up to each event has become increasingly challenging.

“Each year as the numbers and ideas get bigger, it absorbs more and more time, but it’s always worth it.”

First-time Richie, Jason Snell, urges all cricket fans to join in the fever next summer.

“It’s a really good day and a great experience,” he told The New Daily.

“The amount of people that were honking their horns at us as we were walking here and stopping to get photos taken with us, it just goes to show what a legend Richie Benaud really was.”

Prior to the cricket commencing, The Richies collate at a local pub and get set for the day ahead.

“We met up at about eight o’clock and practiced our songs and made sure everyone was in the proper attire,” Snell said.

As the latter stages of the evening session roll around, with the sun descending over the grand stand and the final overs concluding, you would excuse The Richies for quieting down.

But their day is just getting started.

After the final ball is bowled, the festivities continue with a classic pub crawl.

“It wouldn’t be very Australian of us if we didn’t [go out after],” Snell said.

The Richies have made day two of each Aussie test match their own, and the future looms equally as large. With an ambition to continue travelling the country, Hennessy dares to dream about going international for the 2019 tour of England.

“We’ve got to give the Barmy Army a bit of a rival,” Hennessy said.

And as seen this summer, they certainly do.

To get involved with The Richies, visit www.therichies.com.au.

The Richies: How 10 mates are keeping a sporting legend alive