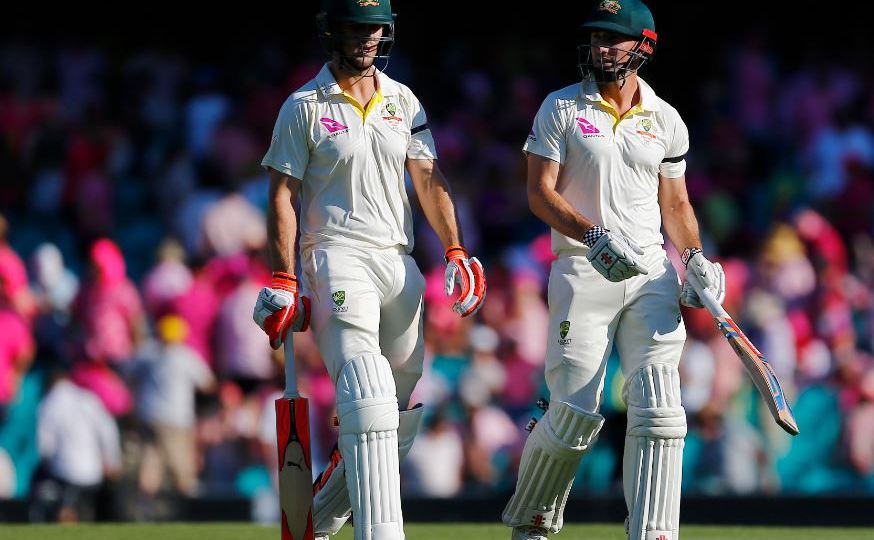 Shaun Marsh could have been forgiven for thinking his Test career was over two months ago, but will wake up on Sunday just two runs away from a second century of the summer.

Marsh worked his way to a clinical 98 not out at the SCG on Saturday – accruing his third half-century of the summer to go with his hundred in Adelaide as Australia put themselves in a commanding position.

Coming to the wicket at the loss of Steve Smith (83) and with Australia still trailing England’s 346 by 72 runs, Marsh was circumspect at first before he flirted with the idea of a Steve Waugh-esque century as stumps neared.

He entered the final over on 97, but pushed a single off the first ball from James Anderson to all but end his hopes of finishing the day with three figures as brother Mitchell (63no) retained the rest of the strike.

Others might have been tempted to go for it, but given what Marsh has been through what’s one night’s sleep anyway?

Dumped from Cricket Australia’s contract list last year, this summer’s showings could easily have become a story of what might have been for Marsh.

When selectors looked to the future for the Test squad to tour Bangladesh last August, he was nowhere to be seen.

However he earned a reprieve when he became one of those controversial selections for this summer’s Ashes, with even former Test opener Ed Cowan indicating Smith was surprised by the decision.

But Marsh has rewarded selectors in his ninth life as a Test cricketer with 387 runs at an average of 77.40.

He first helped resurrect Australia’s first innings in a crucial first Test partnership in Brisbane with a patient 51, before he registered his first Ashes century in Adelaide.

He also scored 61 in the first innings in Melbourne before he looked every bit the established player in Sydney.

The 34-year-old drove square of the wicket superbly and worked the English away on the legside whenever they erred onto his pads.

Together he also compiled a maiden century partnership with his brother for the fifth wicket as Australia went to stumps at 4-479 and leads the dead rubber at the SCG by 133 runs after Khawaja’s first Ashes century finished on 171, three runs shy of his highest Test score.

England is now all but assured of going through another away Ashes series without a win after Usman Khawaja and Shaun Marsh guided Australia to a big first-innings lead on day three.

It would not be fair to say the hosts are tearing ahead — the scoring rate stayed below three runs an over for most of the day.

In one of a number of narrow escapes that blessed Australia, Khawaja would have been out LBW if not for debutant leg-spinner Mason Crane over-stepping by a millimetre, while both Marsh brothers enjoyed successful reviews — caught behind and LBW respectively.

Instead, the Englishmen were forced to continue to toil in the field for another 90 overs, with the Marsh brothers continuing Khawaja’s trend of chasing leather.

Earlier, the first drop watched captain Steve Smith (83) uncharacteristically fall short of three figures when he chipped an innocuous ball straight back to Moeen Ali in the opening session.

Khawaja then notched his first Test ton against England and looked untroubled as the off-spin of Moeen operated in tandem with the leg-spin of Crane for large swathes of the day’s play.

He eventually ran past a wide ball from Crane and Jonny Bairstow completed a simple stumping after tea.

Australia held the lead, but the side’s history with collapses prevented fans from getting too optimistic, until the Marsh brothers got going.

They upped the scoring rate and have hit 19 boundaries between them, with day four looking likely to bring more batting joy for Australia.