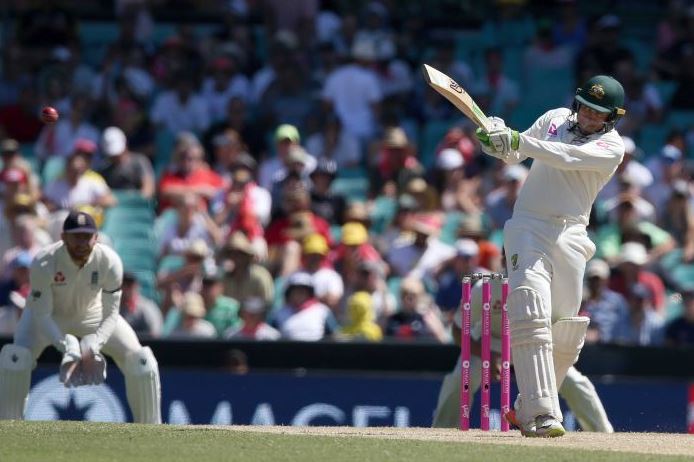 Usman Khawaja, who ended the day on 91, adds another boundary to his tally. AP/Rick Rycroft

Australia can probably claim to have an edge in the fifth Ashes Test at stumps of day two, trailing England’s first innings total by only 153 and a with an unbeaten Steve Smith at the crease.

England resumed on a much sunnier day at the SCG only five down, and pushed ahead with the bat thanks mostly to some lofty lower order hitting, eventually bowled out for 346.

It was a strong recovery by the Aussie batsmen having fallen to 1-1 when Cam Bancroft was clean bowled by Stuart Broad for a duck in the second over of the innings.

David Warner helped arrest the slide at first, as he and Khawaja fought off some tight and determined English bowling through a tricky middle session.

Warner played well for his 56, mixing his usual aggression with both graft and craft, but would have been disappointed to have let the opportunity for another century slide just before lunch.

Jimmy Anderson, who up to that point had bowled well for no reward, got one to move off a good line and length and catch a slight edge en route to the forward-lunging Jonny Bairstow.

But it was all the joy England could manage as the Khawaja-Smith partnership took control after tea, pushing the score on while offering very few chances to the tiring English.

Notably, Smith created another slice of history by becoming the second-fastest player to reach 6,000 Test runs — second only to Sir Donald Bradman.

Earlier, it was Pat Cummins who did most of the damage with the ball as Australia persisted with its short-ball tactics to England’s lower order.

Dawid Malan fell to a blinding catch by Smith at second slip, while Moeen Ali’s promising innings was ended by a rising Cummins delivery that took the all-rounder’s glove on the way through.

Stuart Broad, perhaps now aware the Aussies are only ever going to bowl at his body, was ready for the onslaught and played accordingly, hooking and pulling a number of sixes as he defied his early-series batting form.

Tom Curran joined in too, playing with flair and more than a slice of luck — he was woefully dropped by Josh Hazlewood early in his innings, as was Ali by Cummins — and mustered 39 handy runs before being caught at short leg off Cummins.

They were runs that could have a big say on the outcome of the match, but more pressing for England is the potential for Khawaja and especially Smith to take this game away on day three.

The Ashes: Australia gaining the upper hand in Sydney Test