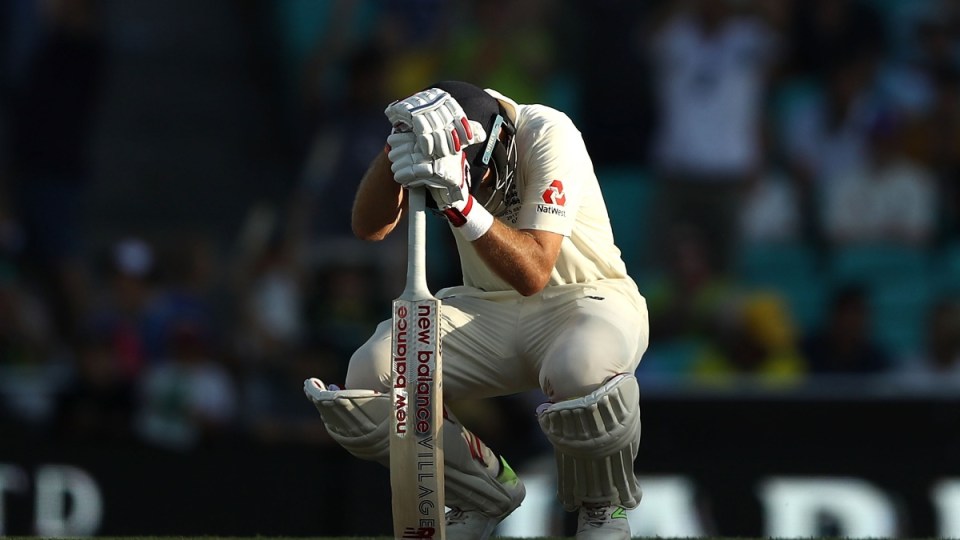 Australia struck early, and late, to leave the fifth test on a knife-edge with England at 5-233 at stumps on day one.

Joe Root’s failure to turn a fourth Ashes half-century into a hundred this summer continued to dog England’s batting, while local boy Pat Cummins was the best of the Australian bowlers with 2-44 as he made his SCG test debut

Four years after Root was dropped for the Sydney Test in England’s 5-0 humiliation in 2013-14, the Englishman appeared set to post his first century of the tour.

Enter Mitchell Starc, who was returning from a heel injury and who had labored for little reward for much of the day.

After having sent the first two deliveries with the second new-ball to the boundary – albeit the second via an inside edge – Root was 17 short of his century.

But when he clipped Starc to a diving Mitchell Marsh at mid-wicket the next ball, he was out for 83 and England’s curse had set in.

On 15 occasions this summer a visitor has reached 50. But only three times has that been turned into triple figures.

In comparison, Australians have reached 50 just as many times but for six centuries.

The England captain’s dismissal opened the door for wicketkeeper Jonny Bairstow to be caught behind for five the following over off Josh Hazlewood, in what was ultimately the last ball of the day.

Root had earlier combined for a 133-run fourth-wicket partnership with Dawid Malan, who went to stumps at 55 not out. But the No.5 must now contend with England’s long tail, with the struggling Moeen Ali due in on Friday morning.

Malan spent 42 minutes stuck on 16 after tea, but provided the perfect rear-guard for Root even as the Aussies coughed up two chances – in the form of a Steve Smith drop and missed run out – to dismiss him.

The pressure will now fall on him to finally convert after two of England’s biggest offenders were at it again earlier.

Opener Mark Stoneman raced to 24 off as many balls before he edged a short Pat Cummins ball that moved slightly away from him.

Stoneman has now reached double figures in all but one of his eight innings, but his highest score of the series is 56.

Meanwhile James Vince has even more reasons to be frustrated. Also without a century on the tour, he needlessly edged a wayward ball from Cummins to Paine on 25. It marked the fifth time he had nicked off this Ashes series.

As for Starc, he did appear to favour his bruised heel as the day progressed, but his late wicket made up for his early leakage of runs.

Cummins has waited six years to run out for his maiden Sydney Test and he made the most of his homecoming.

The Australian quick’s 2-44 came from 17 overs and set the early tone.

Born and raised in Penrith, the 24-year-old grew up dreaming of playing an SGG Test but had up until now been forced to watch from the stands because of a horror string of injuries.

“He’s got the ability to take big wickets for us as a team. He’s obviously got a bright future, at a young age he is a leader of our attack.”

After a series of back, foot, side, and heel injuries which have largely kept him on ice since his stellar debut in South Africa in 2011, Cummins at one time wondered whether he would ever get to play a home Test.

He recorded figures of 1-117 in Melbourne but showed great perseverance to battle through a stomach bug, which was so bad he slept through the tea break on day two.