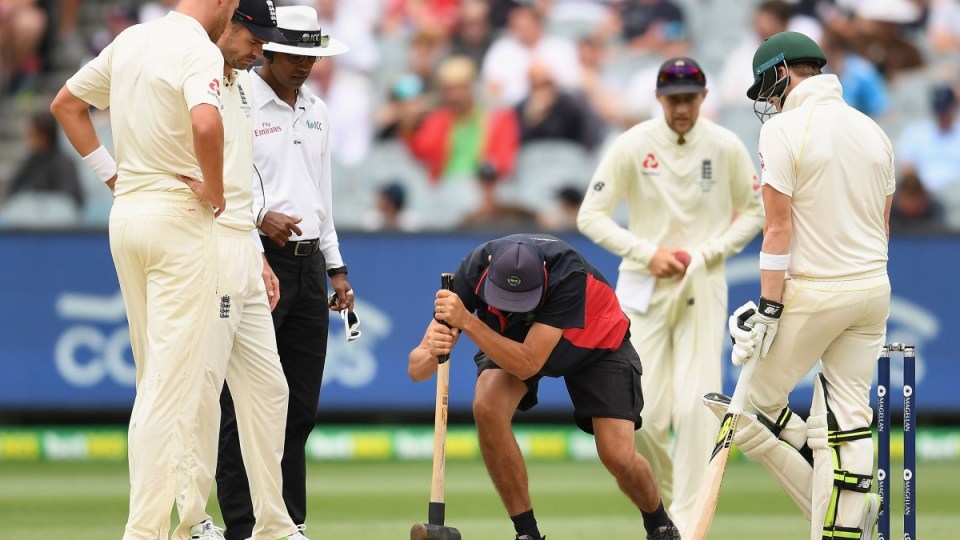 The lifeless pitch gets the full treatment during the Fourth Test. Photo: Getty

The MCG has been the centre of many a great Australian sporting moment, but the International Cricket Council has officially ruled that the 2017 MCG Boxing Day Test pitch was not one of them.

Match referee Ranjan Madugalle has formally rated the pitch “poor”, adding to the controversy over the batting paradise curators served up for the Fourth test

It is the first time an Australian Test pitch has suffered the ignominy of being dubbed as such by the sport’s global governing body.

The ICC also officially put Cricket Australia (CA) on notice about the docile drop-in deck, which hardly broke up at all as Australia and England battled to a dull draw.

CA now has a fortnight to respond to the stinging critique.

The Melbourne Cricket Club (MCC) has been embarrassed by the saga but can take solace from the fact it may have paid a heavier price for the lapse in quality.

The Fourth Test was the last to be played under an old set of punitive measures for poor pitches, with harsher penalties to apply in future.

A new demerit-points system has been introduced that can result in venues being barred from hosting international cricket for up to two years.

Grounds now receive two points for a below average pitch, three for a poor strip and five for an unfit wicket.

Venues will be suspended for a year if they receive five points in a five-year period, or for two years if they accrue 10 points.

Skippers Steve Smith and Joe Root plus many pundits criticised the pitch, which the MCC has already confirmed is the subject of a review.

The tame deck was a batsman’s paradise, with England’s Alastair Cook making the most of the opportunity – scoring an unbeaten 244.

Usually it’s the bowlers who have a field day on a ‘poor’ pitch.

The Fourth Test was the second time in 2017 that Australia played a Test on a pitch that was rated poor, with the other occasion coming in February.

That Pune wicket, on which Steve O’Keefe claimed a haul of 12-70 as he spun the tourists to their first win in India since 2004, was likened to “the surface of Mars” by Shane Warne.

Mitchell Swepson claimed career-best figures and the ‘Bash Brothers’ did the rest as Brisbane Heat consigned Melbourne Stars to a nine-wicket BBL defeat on Tuesday night.

The much-hyped Stars fell to 0-3 for the season as Brisbane cruised to victory at the MCG, reaching the target of 142 with five overs to spare.

Promoted to open the batting, master-blaster Chris Lynn plundered three sixes on his way to 63 off 46 balls. His 101-run stand with Heat captain Brendon McCullum was the pair’s third BBL hundred-partnership.

The Stars would have had Lynn out for a third-ball duck if not for captain John Hastings dropping a sitter at mid-off in the first over.

It was a welcome return to form for Lynn, who underwent shoulder surgery in July and is the third-highest run scorer in BBL history.

McCullum faced just 27 balls before bringing up his fifty with a six off Liam Bowe.

Glenn Maxwell earlier fought a lone hand for the Stars with a composed 50 off 39 balls, although the frustrated allrounder was unable to find many positives after the game.

“We’re not looking like going anywhere but bottom at the moment,” he said.

“We’re playing terrible cricket. We’re not probably playing together as a team … we were putrid today.”