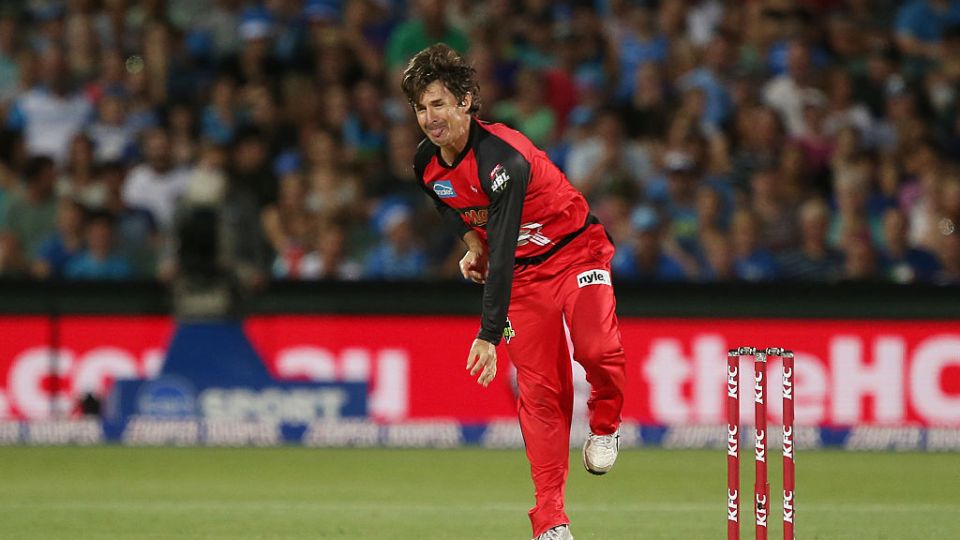 The left-arm leg-spinner with his boundless enthusiasm and Cheshire cat-like grin joined the Melbourne Renegades for this years’ Big Bash League (BBL) at the grand old age of 46.

He’s played seven Tests and more than 100 one-day and Twenty20 internationals for Australia. But after giving professional cricket away in 2008, he’s bowling better than ever.

Since signing for the Perth Scorchers in 2011/12, Hogg has gone on to play on the T20 world circuit in India, South Africa, Bangladesh and the Caribbean, as well as starring in Australia’s BBL and for the Australian T20 team.

Why does he continue to play and what drives him?

Hogg, born and raised two hours south of Perth in Western Australia’s wheat belt, could only dream of playing for Australia.

He’d watched his father, George, play out an impressive cricketing career as a middle-order batsman who scored over 70 centuries in grade cricket.

He wrote stories about scoring Test hundreds and battling against the West Indies with his heroes, while asking anyone who listened to have a hit or bowl.

Former South African and Zimbabwean Test player John Traicos has mentored and coached Hogg over the past 18 years. He helped him transform from a medium-pacer to a fine spin-bowler, and he puts Hogg’s success down to his dedication and uniqueness.

“Brad’s accuracy as a bowler of the most difficult of deliveries – left-arm Chinaman [leg-spin] – made him unique as a spin bowler in one-day cricket,” he said.

“Brad’s bowling has got better and better. His action is a perfect side-on action, and [he has] his googly, which most batsmen have struggled to read. Coupled with hard work and intensive practice, he has mastered his bowling.”

Hogg’s rebirth in the T20 format keeps his skills sharp and has allowed him to continue playing at the highest levels.

“T20 cricket has come of age and gives an opportunity for people to participate in high-level cricket,” Hogg says.

With more than 20 years as a professional cricketer, he understands how to deal with the sorts of pressure situations a spinner often faces in T20. They have a maximum of 24 deliveries against batsmen hell-bent on sending them into the stands.

“It’s very much a mental game, really,” he says.

Hogg learned the art of patience and performing under pressure in the harsh glare of the Perth sun … and former WA captain Tom Moody.

As a younger cricketer, Hogg wanted to take wickets every ball and feels like if he’d listened to his peers back then, he’d be a more successful bowler now.

“I probably would have liked to have been a little bit more patient and listened to my peers a bit more early on in my career, and would have probably had a bit more success.”

“I had Tom Moody standing at first slip when I starting bowling my left-arm Chinamans. You had a number of deliveries to your armoury, and I just wanted to get them out each over.

“The guys were trying to teach me to be patient, bowl nice, patient leg-spinners and put the pressure on the batsmen. He’d [Moody] be at first slip, and if I bowled an over of leg-spin, he’d be absolutely jumping for joy.”

Patience is something Hogg has had to get used to this year, as he’s spent the past six months overcoming a knee injury. This time off has fuelled his desire to play cricket even more – if that’s possible.

“I just take it year by year, just like this year,” he says of any retirement plans.

“The Melbourne Renegades and I sat down while I was going through the operation. I just said to them, ‘if you do want to go ahead, I do want to play on’. We deliberated on little bits and they just backed me that I was going to be fit for the tournament, and we both took that risk.

“The three things I’m going to miss when it all ends are being part of a team, having that contest out in the middle and seeing kids on the sideline have that passion in their eyes, just like you did when you were a kid. It just makes me feel young.”

And it’s this passion for the game and sense of spirit which is why Hogg continues to be such a force in the BBL, according to Traicos.

“It’s his love for cricket and great sense of humour and fun which has made him a favourite with cricket fans, both young and old,” he says.

Hogg represents a throwback to our youth, where we lived for Saturday sport and our own field of dreams. Perhaps that’s why he appeals to Australia’s sporting public.

“[It’s also] his perpetual youth and fitness and incredible determination to succeed. Overall, his story is a special one that every small boy in Australia dreams about.”

He makes it clear he’s still eligible for national selection, with a T20 World Cup in Australia in 2020. Would Hogg be available when he’s almost 50?

“It depends on who’s the captain,” he jokes.

“I’m never going to say no … As far as I’m concerned, it doesn’t matter about your age.

“If you are performing, and still have that desire to represent your country, and they think that you’re the best main for that particular position, then why not?”

It’s hard to disagree with him.