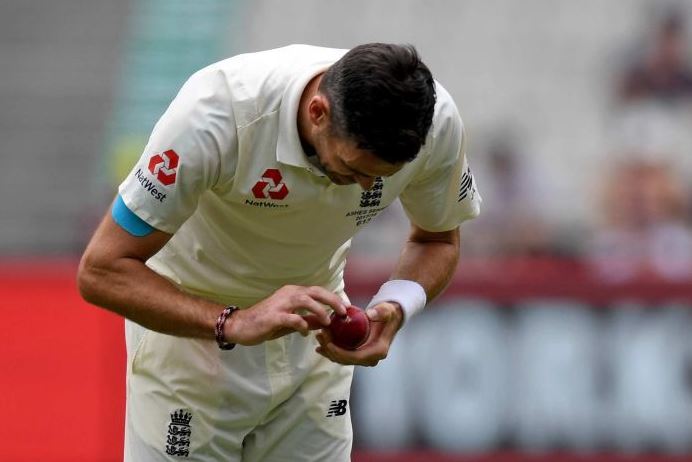 Umpires have cautioned England over the methods they used to quickly attain reverse swing at the MCG – but the match referee is satisfied Jimmy Anderson did nothing illegal while cleaning the ball.

Footage emerged on Friday of Anderson working on the ball with his thumb, prompting Mike Hussey to suggest the paceman might be issued a please explain.

“As soon as I saw the headlines I raced into the umpires and that was their words – ‘nothing to worry about, it was a beat-up, absolutely fine’.

“If he was trying to scratch it, he was scratching the wrong side.”

Bayliss described the saga as nothing but “Pommy bashing”.

“We’re used to that. We knew when we came here it was going to be 24 million versus 11, you have to laugh it off,” he told BT Sport.

It was confirmed after play that match referee Ranjan Madugalle will not be levelling a ball-tampering charge.

Anderson is now in the clear, unless International Cricket Council chief executive David Richardson takes the highly unusual step of disagreeing with one of the game’s most respected officials. That isn’t expected to happen.

Anderson, Joe Root and Stuart Broad were involved in a tense discussion with umpires Sundaram Ravi and Kumar Dharmasena on the morning of day four of the fourth Ashes Test.

Ravi later had a long chat with Root following the morning drinks break.

The discussions centred on the fact Root and many teammates had failed to return the ball on the full to keeper Jonny Bairstow.

The practice of using the abrasive centre-wicket block to help rough up the ball is frowned upon but widely used. Australia have also been warned by officials in Melbourne about doing it too much.

“Every team in the world does it so it’s a bit hard to stamp out,” Bayliss said.
“The umpires don’t want it to go overboard.”

Shane Warne and Michael Slater both suggested on the Nine Network that Anderson erred but stopped short of levelling any allegations.

“They got the ball to reverse pretty quickly,” Warne said.

“When you do anything to the ball besides shining it, (you should) make sure you go to the umpire (and show him what you want to do).

“The umpires then know there is nothing untoward going on.”

Dharmasena made the same point to players.

“He’d like them to do it in front of the umpire,” Bayliss said.

In addition to bounce returns, the tourists also regularly attempted to throw down the stumps on day four even when there was no hope of a run-out.

“No problem with the ball being thrown at the stumps by both teams as long as that’s all it is! Wouldn’t have thought the ball could reverse so quickly,” Johnson posted.

Second COVID booster eligibility expanded
UK government approves ownership change at Chelsea
Navratilova baffled by Wimbledon points row
PM returns to Canberra after debut on world stage
Beaten De Minaur takes aim at French fans
WHO says monkeypox outbreak ‘containable’
Do you get ‘fitspo’ on social media? This is what to look out for
Today's Stories