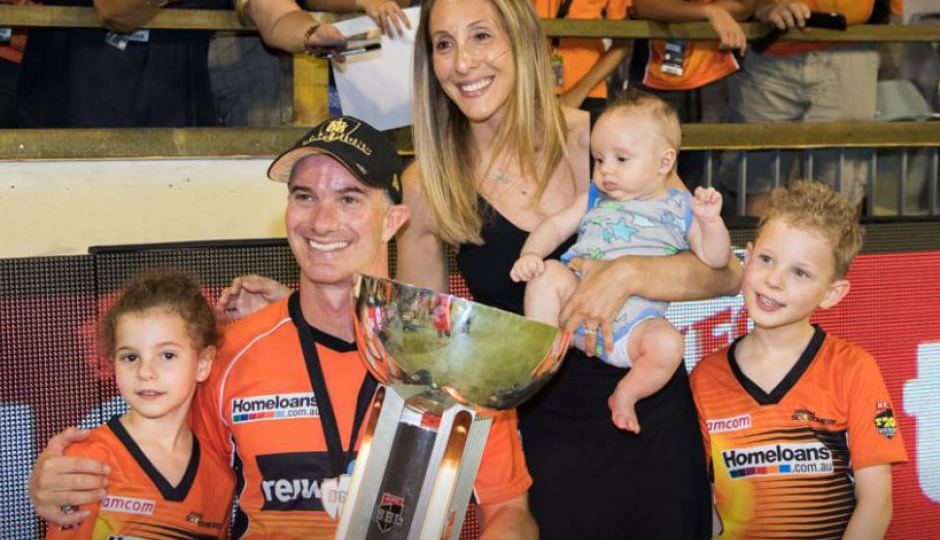 Perth Scorchers batsman Michael Klinger isn’t sure if he’ll feature in the BBL this season after his wife Cindy was diagnosed with breast cancer.

Klinger revealed the shock news in an open letter on the Scorchers’ website, saying cricket is now secondary while he helps his wife win the battle of her life.

The 37-year-old said Cindy had a routine scan on her back last week after experiencing pain in the area.

Those scans and a subsequent biopsy revealed Cindy had breast cancer, and that it had spread to at least three spots on her spine.

“We had to tell Bailey and Summer of the fight their mother now faces, which is something I wouldn’t wish on anyone.

“In fact, along with delivering a eulogy at my mother’s funeral, it was the hardest and most terrible thing I’ve had to do in my life.”

Klinger says he may still play some games for the Scorchers this summer, but will prioritise his wife’s health and any appointments she may have.

The loss of Klinger for some, or possibly all, games is a big blow to the Scorchers, who have already been hit hard by injuries and international call-ups.

Star pace duo Nathan Coulter-Nile (back) and Jason Behrendorff (back) will miss the start of the season, while Sam Whiteman (finger) is still at least three weeks away from resuming.

The Scorchers’ title defence begins against the Sydney Sixers at the SCG on Saturday.

Read the full text of the letter below:

Last week, my wife Cindy had a routine scan on her back, which had been causing her pain and no physiotherapy or anti-inflammatory tablets seemed to help.

The result of that scan completely shocked and devastated us.

Doctors identified three spots on her vertebrae that required further investigation – within hours, we were told she had cancer.

A biopsy was taken of the lesion and determined that my wife of almost 10 years had breast cancer that, based on the information we have so far, has spread to at least those three spots identified on her spine.

I know a lot of people think very highly of their own loved ones and I’m no different — to me, Cindy is the most beautiful person, inside and out.

She is the most considerate and selfless person I know, who is willing to help anyone with anything they need at the drop of a hat.

We had to tell Bailey and Summer of the fight their mother now faces, which is something I wouldn’t wish on anyone.

In fact, along with delivering a eulogy at my mother’s funeral, it was the hardest and most terrible thing I’ve had to do in my life.

I have never considered myself to be the most skilled or flashy batsman going around, but every time I step on the field, I do so with a winning and competitive attitude — I’m a fighter.

For the 14 years since I met Cindy, she has been my No.1 supporter, my confidante, my motivator, my carer. My everything.

But our roles reversed from the moment we found out Cindy had cancer.

Cindy must now take the mantle as the “fighter” and bring a positive and winning attitude to every treatment and hurdle she runs into along the way.

I, on the other hand, need to become chief carer, supporter and motivator.

Playing cricket, right at this moment, is secondary.

It still may happen, because Cindy wants me to play and says it will be a good distraction for her and the kids to see me do so, either on TV or at #TheFurnace.

But, by my choice, if playing clashes with any appointments or treatments, or if Cindy or the kids need me, I will be by their side.

I started writing this piece in the middle of the night, when my thoughts and emotions refused to let me sleep, and I began wondering why I was doing so.

Firstly, it’s helping to get some things off my mind, which has been running at 100 miles an hour for the past two days, trying to arrange for Cindy to see the best people in the breast cancer field in Perth.

I also wanted to explain to my teammates, who I adore and admire so much, and to the Perth Scorchers fans, who I have grown to love, what is happening and that I hope they don’t think I’m letting them down.

Finally, I am privileged to work for the best organisation in Australia in the WACA and the Perth Scorchers, an organisation that has the most caring staff and unbelievable group of human beings.

I just want them — from the staff to the players — to know that I’m not letting them down and I’m just doing what I need to do for my wife and children during this totally unexpected and very difficult time.

Cindy will fight and we, as a family, will be right there with her throughout the battle, supporting her in every way we can.

But, particularly at this time of year, that battle has brought us a perspective on life that we never expected.

Leading into the festive season, give your loved ones a big hug and a kiss.