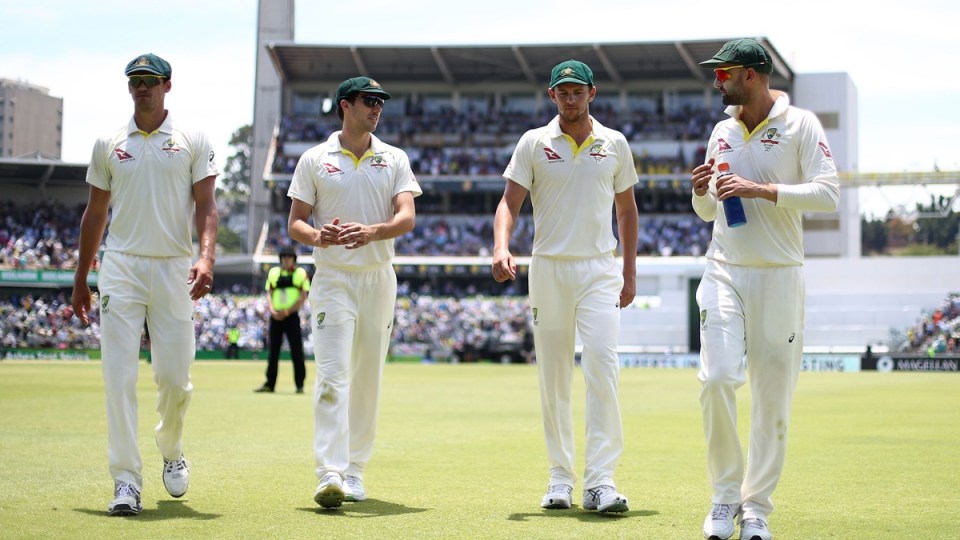 Much of the credit for Australia’s Ashes triumph has gone to the batsmen.

With a pair of hundreds, including a monster 239, captain Steve Smith has rightly been the subject of praise.

On a flat wicket in Perth, where England’s bowlers toiled without success, Australia took 20 wickets and did it comfortably.

That led many to ponder whether Smith’s ‘Fab Four’ – comprising of quicks Mitchell Starc, Josh Hazlewood and Pat Cummins and off-spinner Nathan Lyon – are our best attack of all time.

Former Test bowler and New South Wales coach Geoff Lawson has worked with all four and said they are “certainly in the discussion”.

“It takes great skill to be able to bowl teams out on a consistent basis and this bowling unit has done it three times in a row,” he told The New Daily.

“They are certainly in the discussion with the great Australian attacks of the 1970s, in [Jeff] Thomson, [Dennis] Lillee, [Max] Walker and [Ashley] Mallett, as well as the late ’90s, with [Glenn] McGrath, [Shane] Warne, [Jason] Gillespie and [Brett] Lee.

“The equal best ever? We have to see if they are dominating world cricket in a few years from now.

“They have potential and will continue to evolve with every Test match and Test series.

“England has two fantastic bowlers as well, but Australia has just outbowled them.”

The most promising element about Australia’s attack, Lawson believes, is that none of the quicks have played more than 50 Test matches.

And he is convinced they will only improve further with more experience of playing in different conditions.

“Every time they get exposed to different conditions, there is certainly improvement in them,” he said.

“Starc is a great example of that. The way he went in Asian conditions … he has learnt a hell of a lot and he keeps getting better.

“They are learning as they go so they will continue to get better.”

The most pleasing aspect for Lawson has been the way Australia’s quicks have steamrolled their way through England’s tail.

He said the barrage of short bowling has been “absolutely irresistible” against the tail.

“That sort of bowling reminds me of the West Indies sides of the 1980s – as much as you tried, when you were six out, it was almost all out,” he said.

Len Pascoe – a fast bowler who was terrifyingly quick at his best for Australia – agrees with Lawson.

“I would categorise this group as an evolving fast bowlers unit which, in itself, is a scary thought given what they can do with the ball,” he told The New Daily.

Pascoe insists there are elements of fast bowling all three need to master and wants to see Starc bowling as quick as possible – all the time.

“Not many have that ability and he should continue to give it all … not compromise on his pace for anything.

“I would like to see [Cummins and Hazlewood] learn how to leg-cut or off-cut the ball and then they will be even more potent.

“I have no doubts that in the next 12 months or so, this attack will be even more threatening.

“They have the potential to be one of the greatest attacks Australia has produced.”

The Ashes: The real reason Australia won the urn back