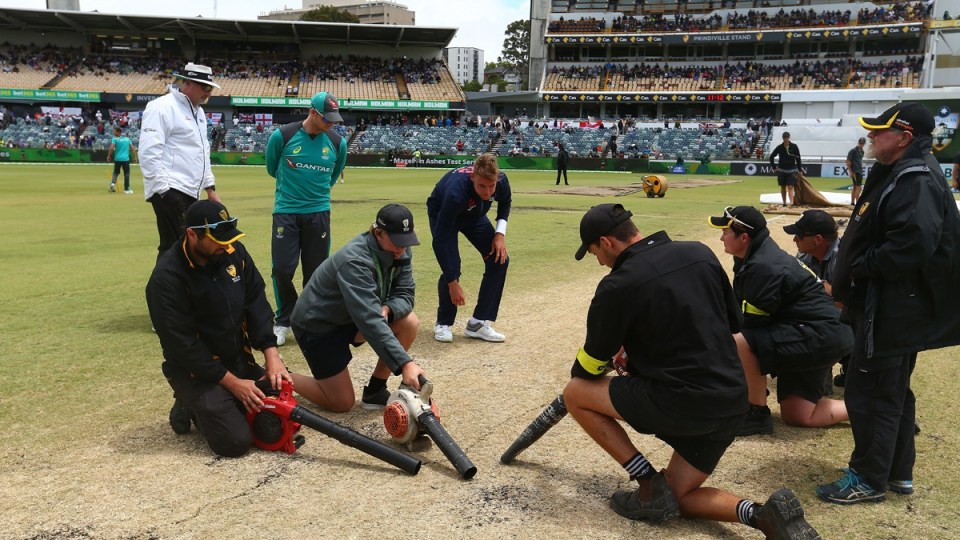 Ground staff were desperate to get play back on. Photo: Getty

The cricket world was in shock after it emerged that covers on the WACA pitch had failed to stop rain from soaking the wicket, delaying the start to a thrillingly poised fifth day of the third Ashes Test.

Australia can regain the Ashes on Monday in Perth and had England on the ropes overnight, the tourists at 4-132, requiring another 127 second-innings runs to make the hosts bat again.

Play eventually got underway at 4pm (AEST) and is scheduled to run until 9pm (AEST), but Australia may not have enough time to force victory, even though Josh Hazlewood bowled Jonny Bairstow in the second over of the day.

When exactly the pitch got wet was unclear, with showers falling overnight and then again in the morning while the covers were not on.

The wet pitch meant that even when the rain stopped, no play was possible in the early parts of the day, as England complained about an “unacceptable” pitch, and former players were left stunned.

“This is big-budget sport, yet you’ve got a couple of casuals on the covers who have never done it before and take 10 minutes to do it [cover the wicket] … wouldn’t you at least practice?”

Ex-Australia captain Michael Clarke added on the Nine Network: “You think these days with the money in the game, how have we got covers with holes in them?”

Match officials finally said they were happy with the pitch and scheduled a 3.40pm (AEST) start, only for a shower to again cause a delay, but it did not last long.

Nine Network host Mark Nicholas described the scenes as “crazy” and “infuriating”, while Australia legend Adam Gilchrist said England skipper Joe Root was not happy that the umpires were eventually happy with the pitch.

“I know he is a little bit disappointed that the umpires have said it’s fit to play,” Gilchrist said on BT Sport.

“Yes, it’s firm on top, but the spikes … when they walk onto them [wet patches] they really sink into those little spots.

“Everywhere else around the wicket is rock hard, so that’s going to create indecision in the batsmen.

Umpire Chris Gaffaney earlier told the Nine Network that the wicket was “fairly soft” and that “we believe the pitch has been altered overnight”.

The issue is a PR disaster for the WACA, staging its last Ashes Test.

Australia is in complete command of the match after a mammoth 9-662 (dec). Captain Steve Smith made 239 while Mitch Marsh hit 181, giving the hosts a 259-run lead after its first innings.

After nine overs of play, England were at 5-153, still trailing Australia by 102.

Victory in Perth would give Australia an unassailable 3-0 lead in the five-Test series, enough to win back the Ashes after England won the 2015 series 3-2.

The Ashes: The ‘astonishing’ error that could cost the Aussies