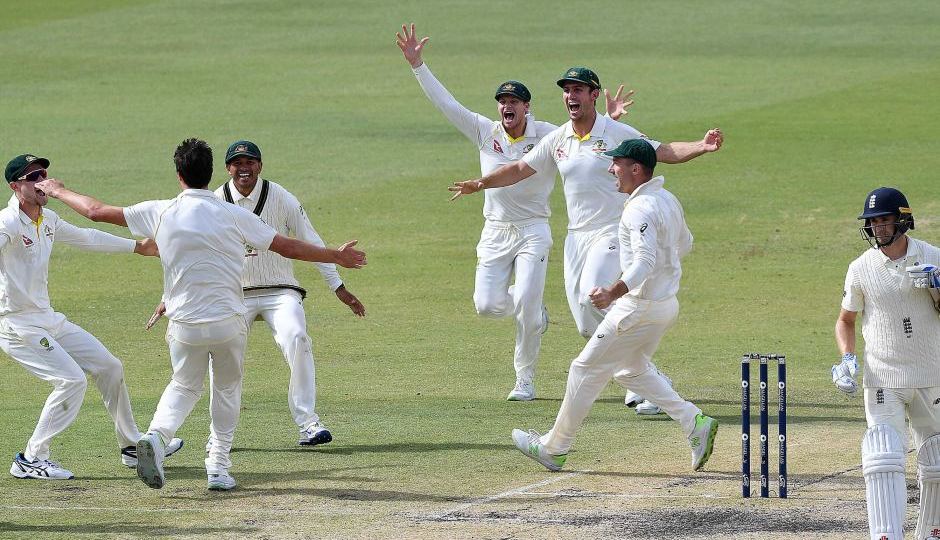 Chris Woakes becomes the last man to fall as Australia wins back the Ashes. Photo: AAP

Australia has reclaimed the Ashes on a misbehaving WACA wicket, crushing England by an innings and 41 runs on day five of the third Test.

Steve Smith’s men required a single session on Monday to roll the tourists for 218. England reluctantly resumed on 4-132, clinging to hope that wet weather could keep the five-Test series alive.

“It’s an amazing feeling,” Smith said after being named man of the match for his career-best knock of 239.

“It’s a moment that we have been looking forward to for a long time.

“There’s so many different emotions coming out right now, I’m just so excited. The boys are going to celebrate hard tonight.

“A lot of credit has to go to the selectors as well. They made a lot of bold decisions.”

Overnight rain seeped through the covers and soaked an area of the pitch, threatening to ruin the hosts’ hopes of taking an unassailable 3-0 lead in the series.

The start of play was delayed by three hours, during which ground staff worked on the wet spot with blower vacuums while captains Smith and Joe Root were in near-constant dialogue with umpires.

“When we got here this morning it definitely wasn’t fit to play. It obviously dried up .. by the end it was fit to play,” Root said.

“Fair play to Australia. They’ve outplayed us in all three games.

“It is very difficult to take.”

Josh Hazlewood finished the innings with figures of 5-48. Australia turned the screws while deliveries ripped and roared off the deck – inconsistently and violently.

Hazlewood’s first delivery of the day was a shooter that straightened and clean bowled Jonny Bairstow, while Nathan Lyon trapped Moeen Ali lbw to dismiss him for the fifth time this series.

Mitchell Starc was down on pace, hampered by a bruised heel that could potentially force him to miss the Boxing Day Test.

Hazlewood, who accounted for both openers in his first spell on Sunday, stepped up as the side’s spearhead.

He removed the final recognised batsman Dawid Malan for 54. Malan offered stubborn resistance before he was caught behind down the leg side.

As has been the case throughout the series, Australia cleaned up the opposition’s tail using a fair bit of chin music.

Craig Overton was out edging to Hazlewood. Stuart Broad gloved a Pat Cummins bouncer and was caught behind, with the next delivery smacking the side of Jimmy Anderson’s helmet.

Anderson recovered from the blow and resumed his innings but it merely delayed the inevitable. Cummins reclaimed the urn later in the spell when Chris Woakes guided a short ball straight to Tim Paine.

It capped a remarkable turnaround given England was 4-368 in its first innings after winning the toss. Smith and Mitch Marsh’s 301-run stand turned the Test on its head.

The series continues on Boxing Day at the MCG.

Smith last week outlined his desire to complete a 5-0 thumping, having banked a 10-wicket win in Brisbane and 120-run victory at Adelaide Oval.

The Ashes: Australia thumps England by an innings and 41 runs at the WACA to seal series