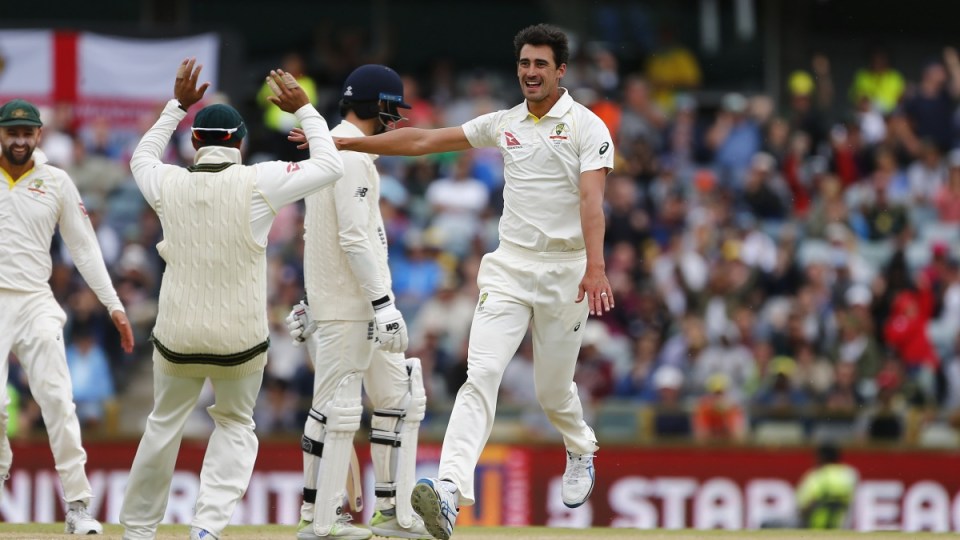 Australia is well placed to reclaim the Ashes with an emphatic victory in the third Test, having broken records with the bat before reducing England to 4-132 at stumps on day four at the WACA.

Australia posted its highest total in a home Ashes Test innings, declaring at 9-662 some three-and-a-half overs after Sunday’s meal break.

England requires a further 127 runs to make the hosts bat again. The enormity of its challenge was underlined by a near-unplayable delivery from Mitchell Starc that straightened after hitting a crack then uprooted James Vince’s off stump.

Without deviation, the ball would have missed the stumps and gone down the leg side.

Vince missed the ball by about 10cm and later admitted there was simply nothing he could have done to stop the outcome.

“If I face that another 20 or 30 times, I think it would get me out every time,” said Vince, who was on 55 when confronted with the unplayable delivery.

Shane Warne labelled Starc’s delivery as the ball of the Ashes.

But former England captain Michael Vaughan went even further, labelling it the ball of the 21st century.

Mother Nature, not mother country, looms as the biggest threat to Steve Smith’s side taking an unassailable 3-0 series lead in Perth.

The day’s final session started on time but swirling showers soon had the Barmy Army dancing in their seats, with the umpires finally calling for the covers at 4.45pm local time. Play never resumed.

More rain is predicted on the final day of the game, but it’s only expected to affect the morning session.

Visiting captain Joe Root may need a downpour of biblical proportions to keep the series alive after his summer of woe continued on Sunday.

Root was undone by Nathan Lyon’s first delivery of the innings. Fittingly it was Smith who clutched the edge that careered off Tim Paine’s gloves, sealing the fate of the tourists’ most talented batsman.

The captains’ battle within a battle has been a no-contest. Smith is set to collect his second man-of-the-match award of the series and has 426 runs at 142; Root has managed 176 runs at 29.

Vince was obstinate during a 95-ball stay at the crease but on 55 was left gobsmacked by a sensational ball from Starc.

Starc has a history of creating special headlines at the WACA.

In November 2015, he entered cricket folklore by sending down a delivery against NZ that registered 160.4km/h on the speed gun – the fastest ever by a left-armer.

On Sunday against England, Josh Hazlewood, bowling with the confidence created by a first-innings lead of 259 runs, dismissed both openers in a fired-up opening spell.

Hazlewood held a sharp return catch to remove Alastair Cook for 14, while Mark Stoneman was caught behind after prodding forward to a ball on a good length.

Earlier, Smith and Mitch Marsh were unable to extend their game-changing partnership of 301 runs.

Tim Paine and Pat Cummins further demoralised England in a 93-run stand, during which Root set defensive fields and opted against taking the third new ball as he waited for Smith to declare.