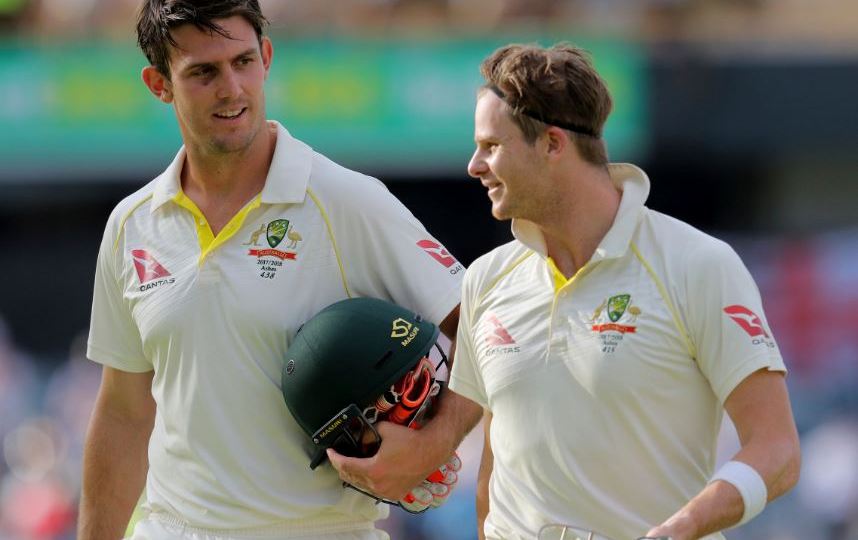 Mitchell Marsh, left, has been recalled to the Test side. AAP/Trevor Collens

At stumps, Smith (229*) and Marsh (181*) cut weary but content figures, having completely dismantled England’s bowlers and confidence in a partnership that moved beyond 300 late in the day.

In reaching his century, Smith showcased a knock in superb contrast to his match-winning Brisbane ton. Where at the Gabba he was the personification of patience (scoring the slowest 100 of his Test career), Smith was swift elegance in Perth, reaching his 100 in 138 balls, hitting 16 fours and one six en route to his quickest Test century.

The only highlight for England came early in the first session as Moeen Ali, bowling a mostly ordinary collection of offbreaks, procured a big outside edge off Shaun Marsh’s defensive shot to nab a catch in the slips.

Out for 28, it was a missed opportunity for Shaun Marsh on a batsman’s wicket, but his younger brother Mitchell would make up for the brief family misfortune.

Mitchell Marsh’s driving game was impeccable, brutally powering pace and spin bowlers alike down the ground with regularity as he reached a half-ton in 75 balls, clubbing seven boundaries.

The runs wouldn’t stop. Nothing England did could stem the flow, as Smith reached his 150 to extend his batting average past a clean 62 — a figure second only to Sir Donald Bradman.

Meanwhile, Mitchell Marsh had manoeuvred himself into the nineties. The nerves would not last long as he crashed a four through point to move to 96, then cut Broad brutally through the same area again to bring up his maiden Test ton.

It was dream stuff for Mitchell Marsh on his home turf, in an innings that featured just how formidable the all-rounder is at the straight drive, while his cut shots proved just as lucrative.

England had no answer. Even Joe Root sending himself on couldn’t provide the wicket the tourists craved, as Smith eased to a second Test double-century, raising both arms and roaring in the direction of the changing rooms.

The quickest double-century for Australia in nearly 80 years, Smith’s moment of joy was followed by another milestone, with Mitchell Marsh converting his maiden ton into a 150.

In total, the pair laid on 301 unbeaten runs for the fifth wicket, with England looking almost completely broken by the time the umpires mercifully removed the bails from the stumps.

Both batsmen took the many singles that England offered and ruthlessly dispatched the bad balls when they came, right until the final overs of the day when fatigue took over but the runs didn’t stop flowing.

With rain seemingly on the horizon in the last two days of this Test, Smith’s thoughts regarding a declaration will be crucial, but it would be a surprise to see Marsh not given a chance to belt his way to a double-century on Sunday morning.

Weather permitting, the Ashes could be Australia’s again within days.