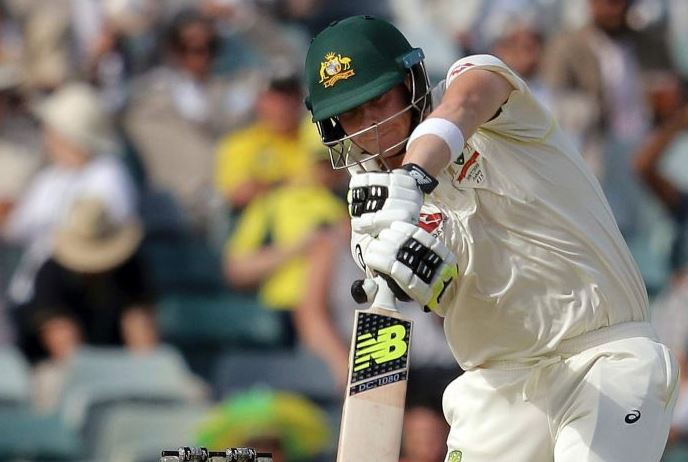 Composed and unflappable no matter what England's bowlers sent his way, Steve Smith once again demonstrated his is a master of the batsman's craft. AAP/Trevor Collens

Steve Smith’s serene, unbeaten 92 has kept Australia well and truly in the contest with another masterful display of batting from the Australian skipper.

At stumps on day two, Australia was 3-203, trailing England by 200 runs after the tourists were dismissed for 403 earlier in the day.

Smith and Usman Khawaja (50) shared in a 124-run partnership for the third wicket to ensure Australia responded strongly after the loss of both openers for relatively cheap scores.

Shaun Marsh will resume alongside Smith after finishing at seven not out at stumps.

Australia looked to start brightly with the bat with both Cameron Bancroft (25) and David Warner (22) looking positive in the opening exchanges, before Craig Overton (2-46) got the breakthrough.

It was the prized wicket of Warner that fell first as Overton coaxed an edge off Warner’s forward drive through to the keeper in the 14th over.

Bancroft fell for a similar score, trapped lbw for Overton’s second wicket and was given his marching orders on review.

That brought Khawaja to the crease, and despite the odd streaky shot — including a thick edge past the flat-footed Joe Root at slip in what was a glaring missed chance for England — Khawaja produced a stoic anchor-role knock in perfect sync with Smith.

While Smith reached his half-ton with relative ease, Khawaja played the patient partner, eventually reaching his 50 off 122 balls.

But no sooner had Khawaja reached the milestone, he was immediately on his way back to the pavilion after being trapped lbw by Chris Woakes (1-42), ultimately given out on review.

Smith, into the high 70s at this point, kept the tempo up as neither England’s pacemen nor spinner Mooen Ali could find a penetrative line to the untroubled captain.

Smith put the handbrake on in the final few overs, determined to keep hold of his wicket for a day-three assault on another century milestone.

For the first hour of day two, England continued from where it left off, with Dawid Malan and Jonny Bairstow continuing to flay the Australian attack to all corners.

Having reached his century the evening before, Malan watched as Bairstow reached his deserved milestone, celebrating joyously before giving his batting helmet a gentle headbutt after registering his hundred.

The pair ultimately compiled England’s biggest-ever Ashes partnership, a 237-run stand for the fifth wicket, before Malan finally fell for 140 to a spectacular catch.

The beneficiary of that catch was the sunhat-sporting Peter Handscomb — on as a sub fielder after being dropped in favour of Mitchell Marsh — who backpedalled at full tilt before taking a leaping dive to pouch Malan’s top-edged drive at cover.

The next wicket fell just three balls later as Ali’s sorry series continued with a second-ball duck, caught in the slips off Pat Cummins (2-84).

The collapse was well underway when Woakes departed for just eight, scooping Josh Hazlewood (3-92) all the way to the fielder at fine leg, before Bairstow’s stumps were cleaned up by Mitchell Starc (4-91) to cap his knock at 119.

Overton lasted just seven balls before edging to Bancroft off Hazlewood, before Stuart Broad’s dismissal for 12 — mis-hitting a shot off the toe of his bat to Bancroft — wrapped up England’s innings.

The Ashes: Steve Smith settles Australia with a masterclass display at the wicket