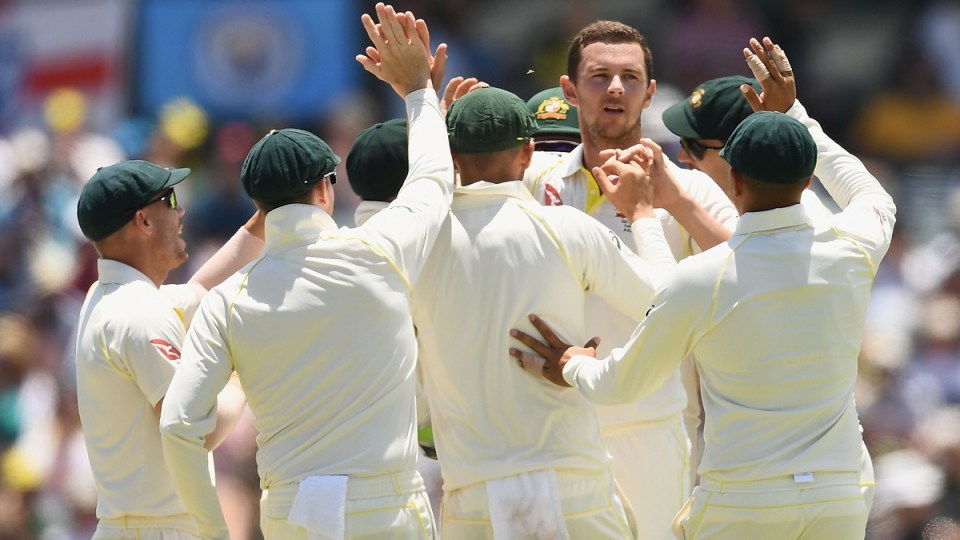 A dramatic England collapse breathed life into Australia’s hopes of winning the Ashes in Perth — only to see that optimism overshadowed by the rapid dismissals of openers David Warner and Cameron Bancroft.

Resuming at 4-305 on day two, with Dawid Malan unbeaten on 110 and Jonny Bairstow on 75, England started brightly to gain complete control of the Third Test at the WACA.

England’s failure to convert its excellent start into an imposing total of 500 or more may come back to bite them on a pitch that appears very good for batsmen once they get their eye in.

In response, Australia were 2-80 at tea after 26 overs, with Warner caught behind for 22 and Bancroft falling soon after to an lbw appeal initially rejected by unmpire Marais Erasmus but upheld by the third umpire.

Warner’s cheap exit stoked speculation that the left-hander is not the player of only a few years ago,  transformed from risk-taker to single-maker with his strike rate in the Ashes series against England dipping to near-record lows.

“Warner is a little bit of a concern for me, (he) looks like he is really playing within himself this series,” ex-England batsman Kevin Pietersen told the Nine Network.

The tentative stroke that saw Warner dismissed for 22 after catching an edge that sent the ball straight from bat to glove will further heighten speculation about the openers’ state of mind.

Australia started day two with four consecutive maidens and an lbw shout against Malan, which was turned down on review.

But the left-hander and Bairstow eventually got to work, taking their partnership for the fifth wicket past 200 runs and frustrating the Australia’s bowlers.

And the boundaries flowed as Bairstow made the most of his promotion to No.6 in the batting order by registering his fourth Test century.

Australia tied things down after a drinks break, though, and Nathan Lyon (1-73) eventually broke the 237-run union when Malan hit against the spin and skied to 12th man Peter Handscomb, who took an excellent diving catch.

The catch triggered a collapse of 6-35, with Pat Cummins (2-84) removing Moeen Ali for a second-ball duck when caught by Steve Smith at second slip.

Bairstow stayed aggressive but he was quickly running out of partners as Chris Woakes was caught in the deep for eight and the centurion then fell himself, playing on off Starc on 119.

England’s tail, which has struggled through the series, again failed to wag, as Craig Overton (2) and Stuart Broad (12) also fell cheaply, giving Australia all the momentum ahead of a crucial second session.

The Ashes: England’s tail-end collapse lifts Aussie spirits … for a while